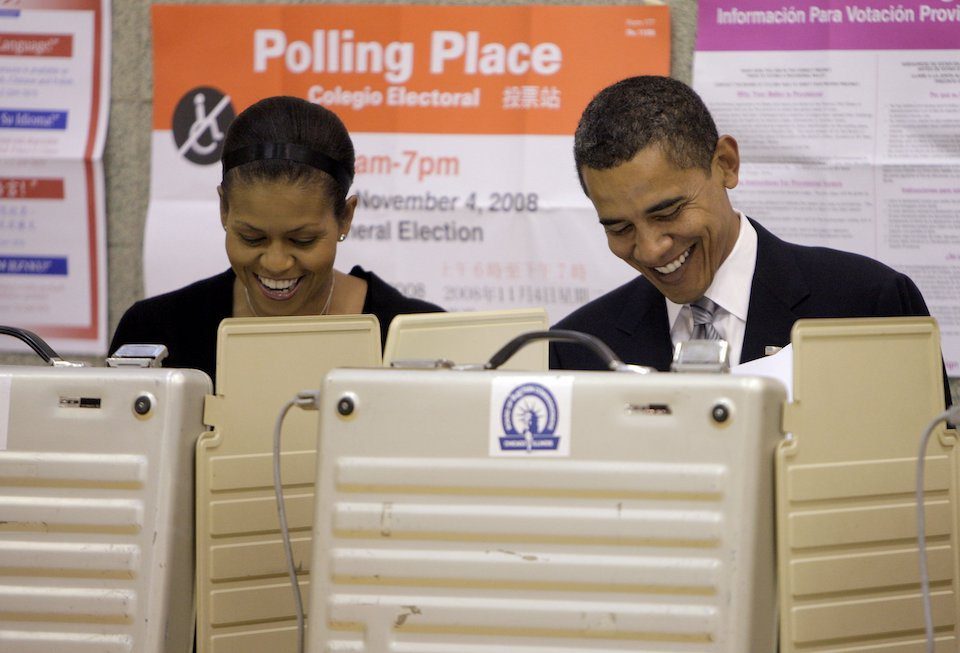 (AP Photo/Jae C. Hong/FILE)
Get The American Independent in your inbox

Welcome to your daily roundup of good news about good people, how you can help make a difference — and a picture of President Obama to remind you to do your civic duty!

It's Election Day! Get to the polls and get out the vote!

It's a big day, folks — time to make some democracy happen, and paint the town blue. All eyes are on Virginia, where Democratic gubernatorial nominee Ralph Northam's numbers are looking good against the Trump and Bannon approved Republican Ed Gillespie.

And there are some amazing women on Virginia ballots, too, like Hala Ayala and Danica Roem.

Find your polling place, find a ride there if you need one, and cast your ballot.

Want a little inspiration? Indivisible groups all around the country have been pitching in with the effort, making over 100,000 calls and sending over 10,000 texts. That's dedication!

Phone banking for the Virginia elections! Let's get this done! @IndivisibleTeam pic.twitter.com/rDpMCULjlC

We are working so hard here in VA, we even have preschoolers canvassing! Do what you can to help! #flipVAblue #Indivisible pic.twitter.com/Rci7u9MzdP

Lots of time (until 6pm) to join us to help #FlipVABlue💙#VirWINia💙https://t.co/dAFdbn5nOr pic.twitter.com/h2TOohOeRX

We're ready for our first shift of the day knocking on doors in Virginia! #FlipVABlue pic.twitter.com/iZw9uVMIpN

And don't forget about Alabama:

Or the most adorable canvasser ever in New Jersey:

Your vote is your voice. Time to speak up!

Sen. Kirsten Gillibrand calls on all of us to tell Congress to act on gun safety

After the horrific mass shooting in Texas, once again the nation is confronting the tragic reality of our overly permissive gun culture — and a Republican Party that is more afraid of upsetting the NRA than they are of a violent person armed to the teeth.

New York Democratic Sen. Kirsten Gillibrand is just as fed up with lawmakers who oppose even the most widely-supported gun safety measures. And she has a message for the rest of us: "Nothing ever changes in Washington unless regular people speak out and demand action."

"You don't need another disaster like this to happen to know what has to be done," she declared.

As far as why nothing on this front has gotten done in Congress?

Wherever you live, you can call on your elected officials to do their job and represent the will of the people on gun safety — rather than the craven demands of the NRA leadership.

The tax scam being pushed by Trump and the Republicans is nothing but a big, fat giveaway to people who already have plenty (like Trump himself). And this whole week is the time to tell members of Congress exactly what you think of it.

Indivisible groups around the nation are protesting the scam, and you can join! Go here to find an event near you, and make sure Congress hears you loud and clear: Not one penny!

#TrumpTaxScam is getting marked up this week & we have 60+ actions across the country! Find or register an event: https://t.co/GUVoegbopL pic.twitter.com/bvsBqqBvig

This morning, we protested the #TrumpTaxScam in Syracuse outside @SBALinda's event promoting the plan by and for billionaires. #NotOnePenny pic.twitter.com/bMLD7V2Gu4

In House races, voters favor Democrats by the widest margin in over a decade

We already knew that Americans think extremely poorly of Trump and the Republican agenda. Another bit of evidence? A new Washington Post-ABC News poll that shows Democratic House candidates are favored over Republicans by the widest margin in over a decade.

That's the largest divide in this particular poll since October 2006, which the Post notes was "just weeks before a midterm in which Democrats won back control of the House and Senate amid deep dissatisfaction with then-President George W. Bush and the Iraq War."

With attacks on health care, the environment, education, and pretty much any other target that comes to Republican minds, it's no wonder the American people are already eager for change, less than one year into this disastrous presidency.

ACTION ALERT: Spread the word — be a #HealthCareVoter

Health care is a human right, and something each and every one of us — no matter our background or our bank account — needs throughout our lives.

So each one of us should be a #HealthCareVoter.

Take the pledge yourself, and spread the word to your friends and family, to hold elected officials accountable for their votes on health care.