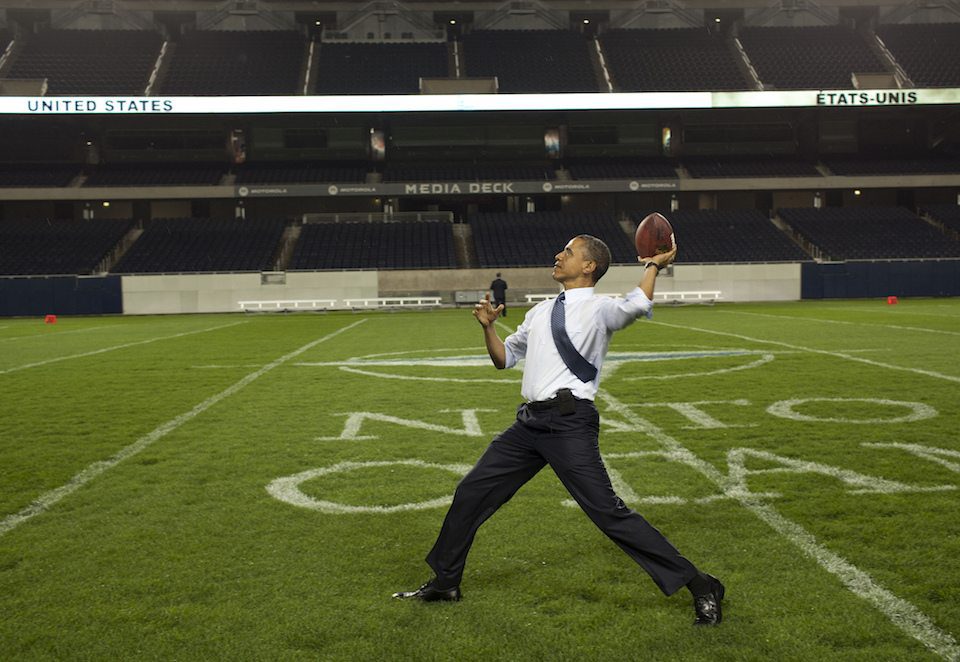 With Election Day less than a month away, President Barack Obama is heading to Virginia to campaign for Democratic gubernatorial nominee Ralph Northam:

Polls have shown Northam, the state's current lieutenant governor, leading his Republican challenger, Ed Gillespie, who has been running such a shockingly racist campaign, that he recently earned the endorsement of Donald Trump.

Trump lost Virginia in last year's election. Obama, on the other hand, had a job approval rating of 59 percent from Virginians when he left office. His rally with Northam could help solidify the Democrat's lead and make sure Virginia stays blue.

There are plenty of other races in Virginia to watch for, and Wendy Gooditis' run for the House of Delegates is one of them. She co-founded an Indivisible chapter in Virginia after the 2016 election, and she's turned that drive to make a difference into a campaign. Check out Wendy's ad to learn about her and spread the word:

In the wake of the horrific massacre in Las Vegas, Senate Democrats are pushing to fund the National Institute of Health's research on gun violence. The funding lapsed in January, but given the recent tragedy, 22 Democrats and independent Bernie Sanders sent a letter urging immediate renewal of research funding:

Thanks in part to NIH-funded projects, the average American's life expectancy increased by eight years between 1970 and 2013; heart disease deaths fell by 67.5% from 1969 to 2013; and cancer deaths decreased by 15% from 2003 to 2012. 17 With 93 Americans dying per day from gun-related fatalities, it is critical that NIH dedicate a portion of its resources to the public health consequences of gun violence. We strongly urge you to renew the gun violence research program as soon as possible.

Government-funded research can save lives. It's time to do something about the lives lost because we are not researching gun violence and how we can reduce it.

ACTION ALERT: How you can help reduce gun violence

The momentum to do something about gun violence — now, finally — has perhaps never been stronger, and Moms Demand Action needs volunteers to help make gun safety happen.

Moms Demand Action for Gun Sense in America is a non-partisan grassroots movement to mobilize moms, families and everyday Americans to advocate for stronger gun laws.

Our common-sense, middle-ground solutions to the escalating problem of gun violence in America are straightforward. We are moms, aunts, sisters, grandparents, dads, brothers, uncles, and friends, and we want you to join us on the ground!

The Democratic Women’s Working Group is introducing the Title IX Protection Act on Thursday, a new bill to strengthen protections for victims of sexual assault on college campuses. Democratic Leader Nancy Pelosi and Reps. Jackie Speier, Lois Frankel, Bobby Scott, and Ann McLane Kuster will be joined by some of their colleagues as well as representatives from women's advocacy groups, to announce this new legislation to codify practices that have been in place for years, some dating as far back as the Clinton era.

Our very own Jess McIntosh appeared on MSNBC Wednesday to talk about the panic in the White House and the GOP about the unstable and terrifying Trump:

Gabe Sherman was on this network last night talking about having sources within the White House who were describing the plan that Kelly and other high-level officials had to bodily tackle Donald Trump if he went for the nuclear football. So I think the panic is there. The panic is inside and out already, and now it's really up to the Republicans to stand up, care about the country, and do something about it.

Attorney General Jeff Sessions is expected to testify soon before the Senate Judiciary Committee, and Democrats are laying down the law in advance. In past appearances, he has tried to dodge questions by claiming executive privilege. Or he's just outright lied. So they've sent him a letter warning him to come prepared:

In light of your upcoming appearance before the Senate Judiciary Committee, we write to express our expectation that you will answer Members' questions fully and truthfully. With respect to potential assertions of executive privilege on behalf of the president, we wish to put you on notice that any reasonable period of abeyance on many of the issues about which you will be asked has long elapsed.

It shouldn't be necessary to advise the attorney general of the United States that he must tell the truth, but given Sessions' record, Democrats aren't taking chances that he might forget.