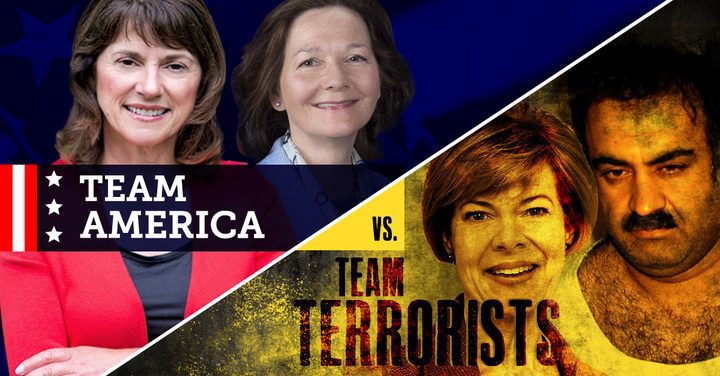 Leah Vukmir campaign
Get The American Independent in your inbox

A Republican challenging Wisconsin Sen. Tammy Baldwin is accusing her of wanting to give terrorists 'hugs and safe spaces.'

Wisconsin Sen. Tammy Baldwin has not yet taken a public stance on Gina Haspel, the Trump nominee for CIA director who ran a Bush-era black site in Thailand that tortured prisoners. And one of her Republican opponents, state Sen. Leah Vukmir, is furious about it.

In fact, according to Vukmir's new press release, if Baldwin opposes Haspel, she is on "Team Terrorists."

"After Sen. Baldwin’s outrageous support of the Iran deal, it’s no surprise that she would rather give the man behind the 9/11 attacks and other terrorists hugs and safe spaces than take adequate action to protect America and confirm Gina Haspel quickly," said the press release.

The statement was accompanied by a picture of Vukmir and Haspel facing down Baldwin, who is superimposed next to 9/11 mastermind Khalid Sheikh Mohammed, above the words, "TEAM AMERICA vs. TEAM TERRORISTS."

The idea that Baldwin is somehow on Mohammed's "team" just because she wants to meet with Haspel before making her decision, or that being concerned about a nominee who oversaw torture is tantamount to giving terrorists a hug, is ridiculous.

The evidence is clear: torture does not work. In fact, Mohammed lied while being waterboarded by U.S. interrogators.

Haspel herself admitted to the Senate that the "enhanced interrogation techniques" the CIA used during her tenure were a failure. But she refused to say whether she thought they were immoral, and admitted she played a role in destroying footage of the interrogations.

Her record has provoked serious concern from several senators, including Republican Sen. John McCain, who called on his colleagues to reject Haspel's nomination.

"I believe Gina Haspel is a patriot who loves our country and has devoted her professional life to its service and defense," McCain said in a statement following Haspel's Senate testimony. "However, Ms. Haspel’s role in overseeing the use of torture by Americans is disturbing. Her refusal to acknowledge torture’s immorality is disqualifying."

But according to the Republican trying to unseat Baldwin, concerns about Haspel put her on the side of terrorists.

Vukmir's incendiary behavior is par for the course in the Wisconsin GOP primary. Last week, another of her opponents, Marine veteran Kevin Nicholson, said in a radio interview that he questions the "cognitive thought process" of any veteran who votes Democratic — prompting over two dozen Democratic veterans, including decorated war hero Sen. Tammy Duckworth, to demand an apology.

Voters must hold Vukmir and the Wisconsin GOP to account for how far they are willing to go to play politics with serious national security issues.