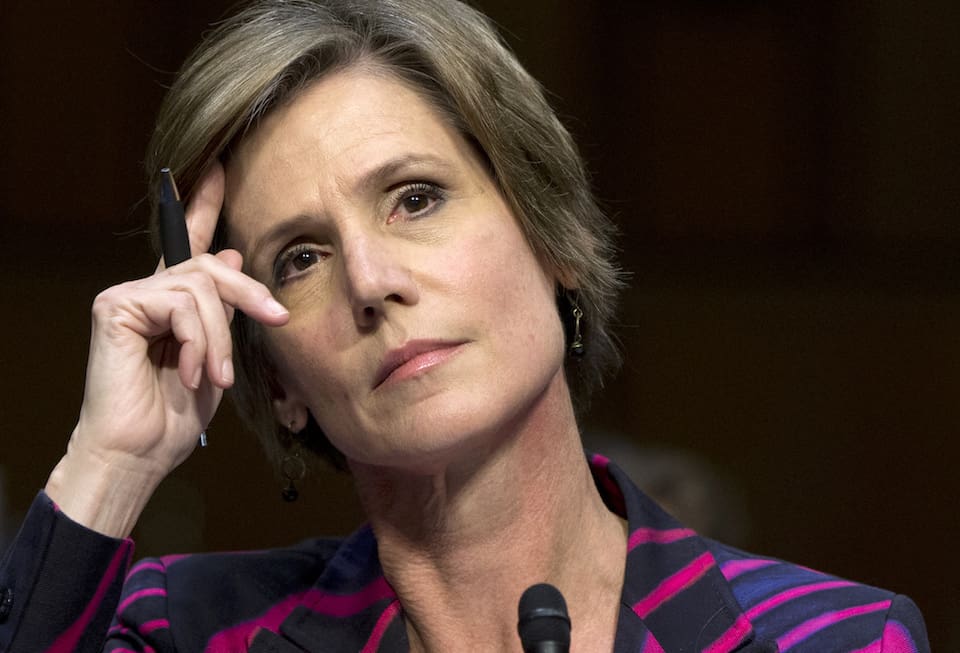 The Trump administration is trying to block former assistant Attorney General Sally Yates from testifying before the House Intel Committee, and the committee's chairman is colluding with them to do so. But Yates is not backing down in the face of GOP cover-up efforts.

On orders from the White House, the Justice Department reportedly communicated with former acting Attorney General Sally Yates earlier this month to claim that executive privilege barred her from testifying before the House Permanent Select Committee on Intelligence.

Yates was scheduled to testify at a committee hearing investigating ties between Donald Trump's presidential campaign and Russia. The hearing itself was abruptly cancelled by the GOP chair of the committee, Devin Nunes, who was also part of Trump's transition team. The cancellation followed a series of strange actions by Nunes, creating a cloud of chaos and distraction.

Former chief of staff of the Department of Defense and the CIA, Jeremy Bash, told Brian Williams of MSNBC that the bizarre antics of Nunes over the past week were orchestrated precisely as an effort to keep Yates from testifying before the committee. Bash indicated that Yates' testimony included information about Trump's former National Security Advisor, Michael Flynn, and the White House counsel's response to the news that Flynn had been lying to Vice President Mike Pence, which would be important and relevant to the committee's investigation into Trump/Russian ties.

Interesting—Jeremy Bash implies Sally Yates had revelations for House Intel about when she told WH that Flynn lied. Nunes nixed the hearing. pic.twitter.com/vKCd1jdoc5

WILLIAMS: Couldn't it be that if Nunes had said to Schiff, the ranking Democrat, this still wouldn't have been in keeping with tradition totally, but, 'Hop in the car with me. A friend of mine at the OEOB has some stuff he says we should see.' Instead of this several day cycle now.

BASH: Schiff would have said, 'Tell them to bring it here. You are the chairman, I am the ranking member of the House Permanent Select Committee on Intelligence. We get briefed by the Executive Branch. We don't go down there and find out what they know on bended knee. They come to us and they give us information.' We are investigating. That's the way it should have been handled. And I think, Brian, the real story, the real issue here, is not so much about the midnight run by the chairman onto the White House grounds. It's really that they wanted to cancel the hearing this week. The hearing this week was going to hear from Sally Yates, the former acting Attorney General. And I'm told that she had some very interesting things to tell the committee, to tell the public, about when she told the White House counsel that Mike Flynn had in fact been lying to the Vice President. And she was only going to be able to speak those things in the context of a congressional hearing, and so the White House and the chairman needed to shut her down. This was an elaborately choreographed gag order on Sally Yates.

Yates was fired by Trump after she refused to enforce Trump's unconstitutional anti-Muslim ban and — more importantly for this issue — after she had warned the White House that Flynn could be compromised by Russia and vulnerable to blackmail.

According to the letters below, Yates' attorney followed appropriate protocol and, on March 23rd, requested permission from the Department of Justice to testify before the House Intel Committee. She and her attorney received a response saying they did not need separate consent for her to do so, and, on March 24th, notified the White House of her intent to testify.

And if that seems confusing, it is by design: As a result of the confusion created by these diversionary antics, Nunes was able to create an excuse to cancel the scheduled public hearing at which Yates was supposed to testify.

Democratic Ranking Member of the House Intel Committee Adam Schiff had this to say about the cancellation of the hearing by his GOP colleague:

Today's hearing would also have provided the opportunity for former Acting Attorney General Sally Yates to testify about the events leading up to former National Security Advisor Flynn's firing, including his attempts to cover up his secret conversations with the Russian Ambassador.

We are aware that former AG Yates intended to speak on these matters, and sought permission to testify from the White House. Whether the White House's desire to avoid a public claim of executive privilege to keep her from providing the full truth on what happened contributed to the decision to cancel today's hearing, we do not know. But we would urge that the open hearing be rescheduled without further delay and that Ms. Yates be permitted to testify freely and openly so that the public may understand, among other matters, when the President was informed that his national security advisor had misled the Vice President and through him, the country, and why the President waited as long as he did to fire Mr. Flynn.

The Trump White House appears desperate to try to silence Yates, which only raises more questions and makes obtaining her testimony more vital. Donald Trump and Devin Nunes would do well to remember that what brought down former President Nixon was not the crime itself, but the cover-up.