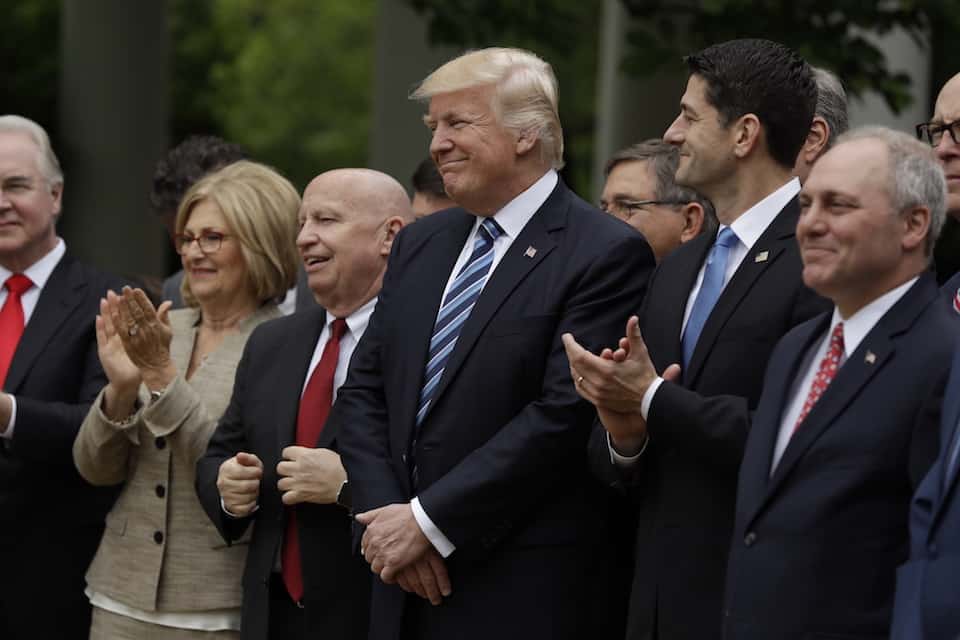 Republicans are condemning Donald Trump's sexist attack on an MSNBC host, but their words do not change their habit turning a blind eye to his misogyny.

But Trump's erratic behavior and serial misogyny have been well known for years, even before his presidential campaign, which was itself a near-constant stream of sexism directed at his critics, women in the media, and at Hillary Clinton.

The GOP chose to back him and his agenda anyway, even after some hinted that they would abandon him after the release of a tape in which he bragged about sexual assault.

Now, Republicans are back to issuing statements of condemnation, while still supporting his agenda.

South Carolina Sen. Lindsey Graham said Trump's "tweet was beneath the office and represents what is wrong with American politics, not the greatness of America."

Nebraska Sen. Ben Sasse wrote, " Please just stop. This isn't normal and it's beneath the dignity of your office."

Maine Sen. Susan Collins tweeted, " This has to stop – we all have a job – 3 branches of gov’t and media.  We don’t have to get along, but we must show respect and civility."

Kansas Rep. Lynn Jenkins said, "This is not okay. As a female in politics I am often criticized for my looks. We should be working to empower women."

New York Rep. Tom Reed told ABC News he is "concerned about that type of language" from Trump and was hurting the effort to pass the Republican health care bill.

House Speaker Paul Ryan, echoing similar statements he made during Trump's campaign, said he does not "see that as an appropriate comment."

Meanwhile, Utah Rep. Jason Chaffetz, who had said during the campaign that he would not be able to look his 15-year-old daughter in the eye if he voted for Trump but then reversed himself and voted for Trump anyway, has yet to comment. He is leaving Congress at the end of June to work at Fox News.

But as they publicly condemned Trump's remarks, many of these Republicans and their allies in the conservative movement backed Trump in the election and continue to support his presidency and agenda.

Trump has a long history of bigotry, with a particular emphasis on misogyny and sexism. He has regularly denigrated women while treating them as if they are only valuable as sex objects. His comments about Brzezinski were right in line with what he has said for his entire life as a public figure.

Trump's official spokespeople reflected this dynamic in their first comments about the attack, backing Trump's misogyny, perhaps because they know that at the end of the day, Republican lawmakers will simply do what he tells them to.

Melania Trump's spokeswoman Stephanie Grisham also defended the tirade, telling CNN, "As the first lady has stated publicly in the past, when her husband gets attacked, he will punch back 10 times harder."

Melania Trump has claimed that she would use her position to address cyberbullying.

Other criticism of Trump stood on firmer ground than that of his Republican compatriots. Mark Kornblau, a vice president at NBC News, said, "Never imagined a day when I would think to myself, 'it is beneath my dignity to respond to the President of the United States.'"

An official statement from the Democratic Party summed up the episode: "Trump has a long pattern of making demeaning, sexist and discriminatory comments about the women who take him on. The fact that they happen frequently doesn't make them okay."