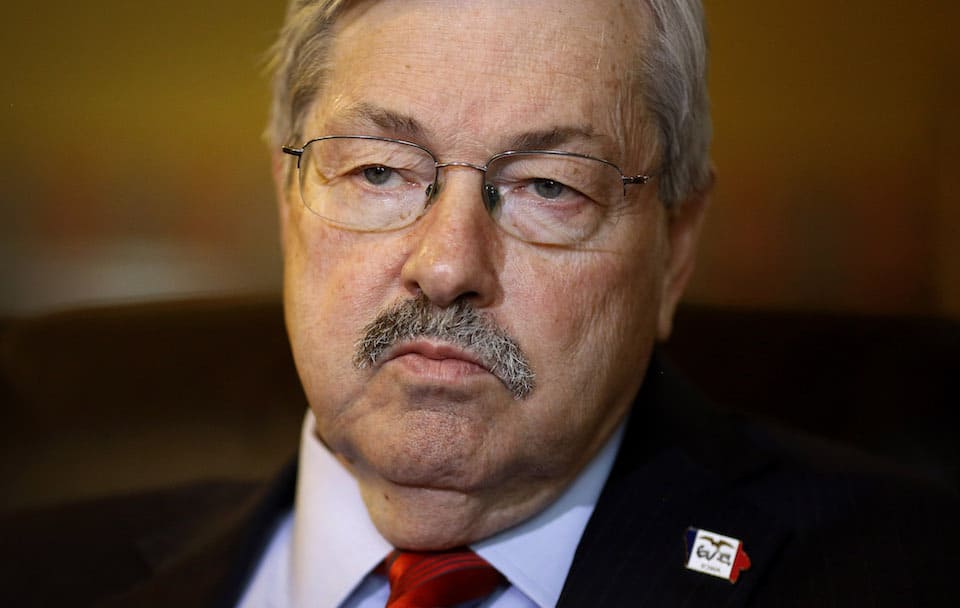 Governor Terry Branstad (R-IA) is arguing the Iowa state legislature should make polls close earlier because the public should "not have to wait up so late to see what the election results are."

Republicans all around the country have been using their dominance at the state level to make it harder for the poor and minorities to vote, through methods such as strict photo ID laws, falsely claiming they are necessary to prevent voter impersonation — in fact, a vanishingly rare crime.

But they have had to be far more creative in justifying other aspects of their voting cutbacks, like reducing the hours of polling places.

The Iowa House of Representatives is considering HF 516, a voter suppression bill that would, among other things, require one of five potentially difficult-to-obtain IDs to vote, eliminate the straight-ticket checkbox (which would make it harder for people to cast informed votes in local races), and reduce the number of absentee voting days.

Branstad, however, stated in his weekly press conference that he does not think the legislation does enough to limit voting. He wants a provision that would cut voting hours on election day itself, closing the polls at 8:00 PM Central Time instead of 9:00 PM — and offering this explanation for why Iowa's polling hours are too long:

[We’re] out of sync with the rest of the world. We don’t come in until the Mountain States in the west.

It’s not in the legislation, but it’s something I would like to see and I think a lot of people who work an Election Day would love to see the Iowa polls close at 8 and I think the public would, too, like to see the returns and not have to wait up so late to see what the election results are.

Branstad's claim that he just wants to lighten the load on poll workers rings hollow, given the bill also makes it harder to cast absentee ballots, which could lengthen lines on Election Day. Incidentally, requiring poll workers to check the ID of every voter also makes their jobs a lot harder.

Furthermore, the governor offered no polling evidence whatsoever to back up his notion that "the public" thinks having to stay up late on Election night is an onerous burden. Indeed, cutting back polling hours as Branstad wants could particularly be a burden on hourly workers.

Under Iowa state law, workers must have at least three consecutive hours between end of business hours and polls closing, or they can request up to three hours off from their employer during business hours. Under the current law, a typical 9-to-5 worker would have four hours to vote after leaving work. Branstad's proposal would reduce it to three hours — short enough that people would face longer lines, but not so short that most people would be entitled to take time off work.

The legislature has not so far adopted Branstad's advice, but HF 516 is already damaging enough, in its current form, to Iowa voters' access to the ballot.

Constituent activism and phone calls have already defeated pieces of the Republican agenda — voter suppression is another key area for the resistance to fight back. Republicans like Branstad cannot get away with their tortured explanations for why they are limiting democracy and attacking Americans' fundamental rights.