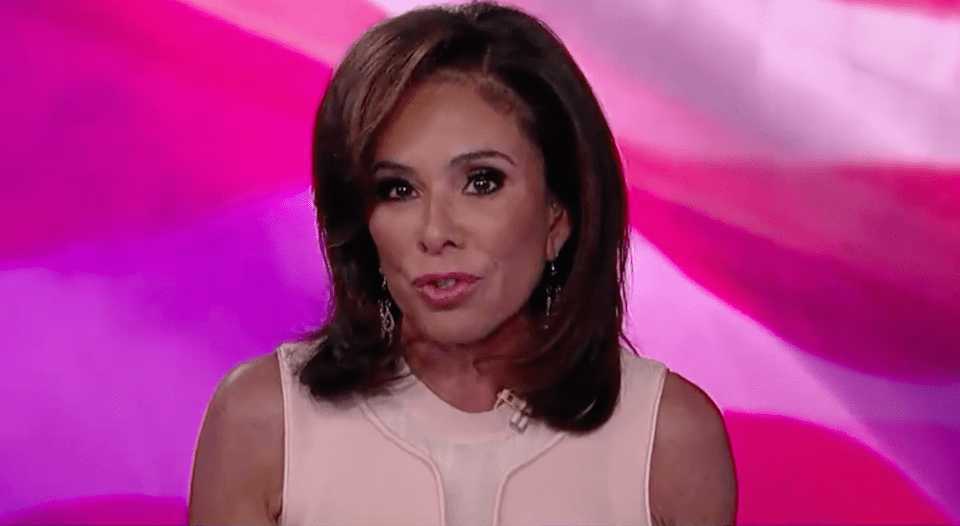 Trump loyalist and Fox host Jeanine Pirro calls on conservatives to become even more negative and heartless in the wake of the horrific shooting in Alexandria.

Donald Trump is a big fan of Fox News host Judge Jeanine Pirro, and she appears to be working overtime to keep it that way.

Since the horrific shooting of Rep. Steve Scalise and four brave others in Alexandria, political leaders from across the ideological spectrum have unified to call for greater civility. Every day citizens have reached across the political aisle to embrace compassion in the face of tragedy.

But not Donald Trump. And not Jeanine Pirro.

While the White House says Trump bares no responsibility whatsoever for the divisive tone in America, his divisive Twitter rants smearing and attacking the integrity of those with whom he disagrees have continue unabated.

And Pirro wants to see more of it — from his fellow Republicans. According to Pirro, "right now, the greatest danger to our country" is Republicans who are not "vociferously supporting their president."

"Whether Republicans agree with Donald Trump or not, that's their job," she says.

That's right. According to Pirro, serving the people they were elected to represent is not the job of Republicans. It's shilling for Trump.

If they're not doing that, she says, they are "in on the effort" with the Democrats to take him down.

Trump has promoted Pirro's show on at least two occasions on Twitter as president — once before the show in which she called for Paul Ryan to step down from his role as Speaker of the House, and again in the lead up to her soft ball interview with Trump himself. It was during that interview that Trump doubled down on the notion of doing away with White House press briefings, unless, that is, "I do it myself."

One can only assume that he is incredibly pleased with her rant.