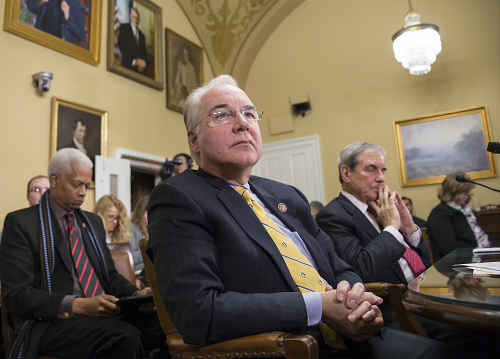 AP photo
Get The American Independent in your inbox

The GOP chairman of the budget committee told reporters they are considering major changes to Medicare in 2017. Those changes are likely to hit low-income seniors and disabled people especially hard.

Price said Republicans are planning to use budget reconciliation to make the changes, which will allow them to pass bills in the U.S. Senate with a simple majority. "I think that is probably in the second phase of reconciliation, which would have to be in the FY 18 budget resolution in the first 6-8 months," he told TPM.

Trump has said he will prioritize healthcare reform. Speaker Paul Ryan has been pushing some form of privatization of Medicare for years, and the House GOP supports it.

All of Ryan’s proposals would impose the same basic structure: taking the single-payer system on which most seniors and disabled people rely to cover their health costs, and replacing it with a voucher.

This voucher will cover some of the cost of inferior coverage that will leave seniors with higher out-of-pocket costs than they would have paid under traditional Medicare. As a bonus, the total cost of paying for an individual senior’s care — that is, the government’s share of the costs plus the individual’s share — could rise as much as 40 percent.

Privatizing Medicare comes down to seniors and people with disabilities paying more out of pocket for health insurance that would likely be worse than what they currently have.

This makes absolutely no common sense, but that does not appear to matter to Republicans in Congress — or to the new President-elect.