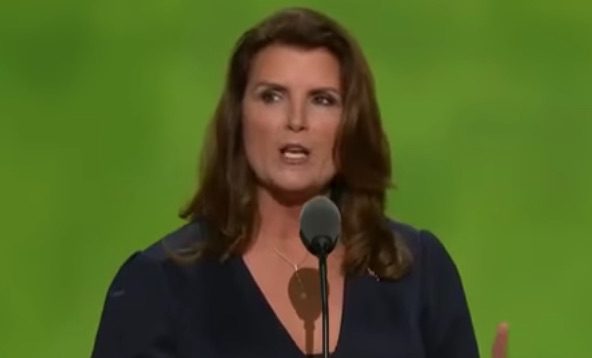 RNC/YouTube
Get The American Independent in your inbox

One of the GOP's top congressional candidates with a close connection to Trump was caught making up fake questions for herself in an online forum.

A Republican congressional candidate was caught planting questions for herself in an online forum.

Kimberlin Brown Pelzer is running for the congressional seat in California's 36th Congressional District. As part of a Facebook Live Q&A, where candidates are supposed to be taking on questions from voters, a question about "sanctuary cities" from Pelzer's personal account was added to the mix.

The Desert Sun newspaper reported that the fake question was planted by Pelzer's campaign, and that she has been pushing the anti-immigrant position as part of her campaign. After the fakery was uncovered, the campaign deleted the phony question.

Pelzer's attempt to generate fake news echoes another Republican candidate. Rep. Martha McSally, who is running for Senate in Arizona, also held a Facebook Live event and posted a comment from her own account praising her for "great video quality," adding, "thank you for your service."

A former actress on the soap opera "Bold and the Beautiful," Pelzer is a one of the pro-Trump candidates who has risen in prominence in the Republican Party. She was selected in 2016 to deliver a speech at the Republican National Convention hailing Trump's candidacy.

Pelzer has been designated by the National Republican Congressional Committee (NRCC) as one of its "Young Guns" for the 2018 election. She is challenging Democratic Rep. Raul Ruiz, who easily won his seat in 2016, winning with 62 percent of the vote.

In an interview with the racist pro-Trump site Breitbart, Pelzer said of Trump, "I believe in this president. I spoke for this president. I believe he needs people in office that are going to help the issues that we put him there to get accomplished."

Republicans hope to hold on to control of Congress, but the unpopularity of the Trump administration has put them on defense.

Candidates like Pelzer, who are so closely identified with his presidency, are fighting an uphill battle. Faking key elements of her campaign won't help her standing with voters.