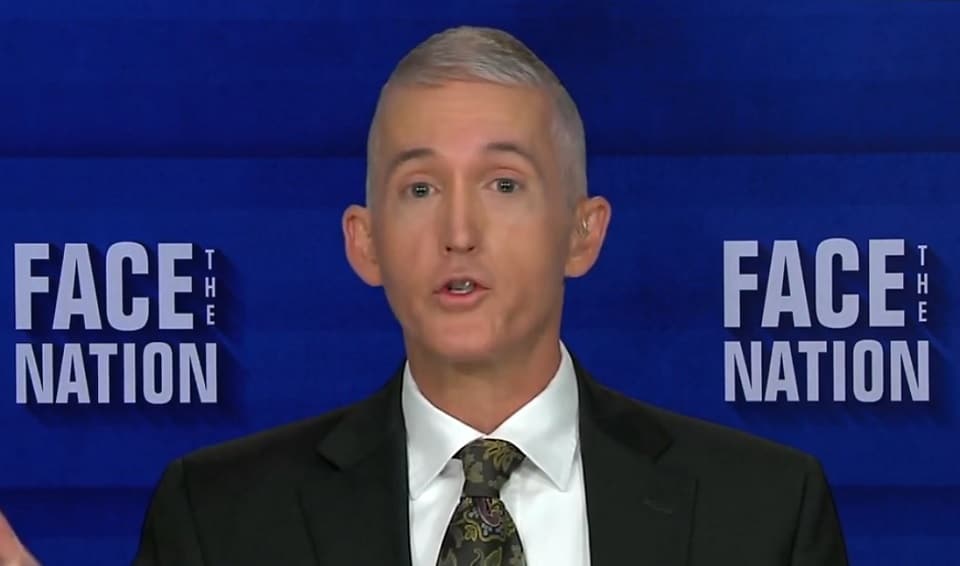 If public confidence in Republicans' ability to conduct an impartial investigation of Donald Trump's Russia ties was already damaged irreparably by House Intelligence Committee Chairman Devin Nunes' (R-CA) actions this week, the threat issued by committee member Rep. Trey Gowdy (R-SC) will not do anything to repair it.

The House Intelligence Committee's investigation into Russian election interference exploded like a bomb this week when FBI Director James Comey revealed that his agency has been investigating possible "coordination" between Donald Trump's campaign and the Russians since July.

Attempts by Republicans to deflect and defend Trump similarly blew up in their faces, notably with House Intelligence Committee Chairman Rep. Devin Nunes' (R-CA) naked attempt to undermine, and perhaps even obstruct, that investigation.

In an interview on Face the Nation, Schiff noted that the GOP rationale does not pass the smell test:

SCHIFF: But the other were the cancellation of an open hearing that was scheduled for Tuesday with Directors Clapper, Brennan, and Sally Yates, the former deputy Attorney General. I think her testimony, in particular, would have shed a lot of light for the public on the whole Michael Flynn chapter, and perhaps that is something the White House did not want to see. I can't otherwise account for why we would have this abrupt cancellation of a hearing that both the chair and I had committed to doing.

DICKERSON: Well, the chairman's argument is that the cancellation of that hearing was necessary because he wanted to have other closed door testimony beforehand, before having that next hearing. That seems like a reasonable idea.

SCHIFF: You know, it certainly would be reasonable if that were the justification, but of course, the one doesn't preclude the other. We welcome the return of any of the witnesses at closed session, but their testimony doesn't necessarily preclude us doing an open hearing that we had already agreed with, the witnesses were prepared to do, they were more than willing to do, so I really don't think that's the justification. Indeed, we got word that they were trying to close the open hearing, even before they suggested an alternate hearing.

Rather than allay concerns about the committee's impartiality and transparency, however, Republican intel committee member Rep. Trey Gowdy (R-SC) only deepened them. Moments after Schiff's interview, Gowdy raised the threat of conducting all Trump/Russia hearings in secret:

GOWDY: I heard the witnesses almost 100 times, John, say they could not answer the question in that setting, and I want you and your viewers to ask themselves, 'Why are we satisfied with every other facet of culture having serious investigations done confidentially?' The grand jury, judges meeting with attorneys, police officers interviewing suspects — all of that is done confidentially, and we are more than satisfied with those investigations. And yet when it comes to Congress, we think we ought to have a public hearing? 100 times those two witnesses said they could not answer the question in that setting. Why in the hell would we go back to that setting if the witnesses can't answer the questions?

Even more disturbing is the fact that Gowdy volunteered all of this on his own — he asked a completely unrelated question about the "health" of the intel committee to give himself the opportunity to raise these purported concerns.

While a small number of Republicans, like Senator John McCain (R-AZ), have joined Democrats in calling for an independent commission and/or a special prosecutor to investigate Trump, it is becoming more and more apparent that others are trying to soften the ground for an all-out assault on this investigation's transparency and impartiality.

And it is also clear that, for now, the Republicans who control the levers of power on the House Intelligence Committee seem bent on doing Trump's bidding.