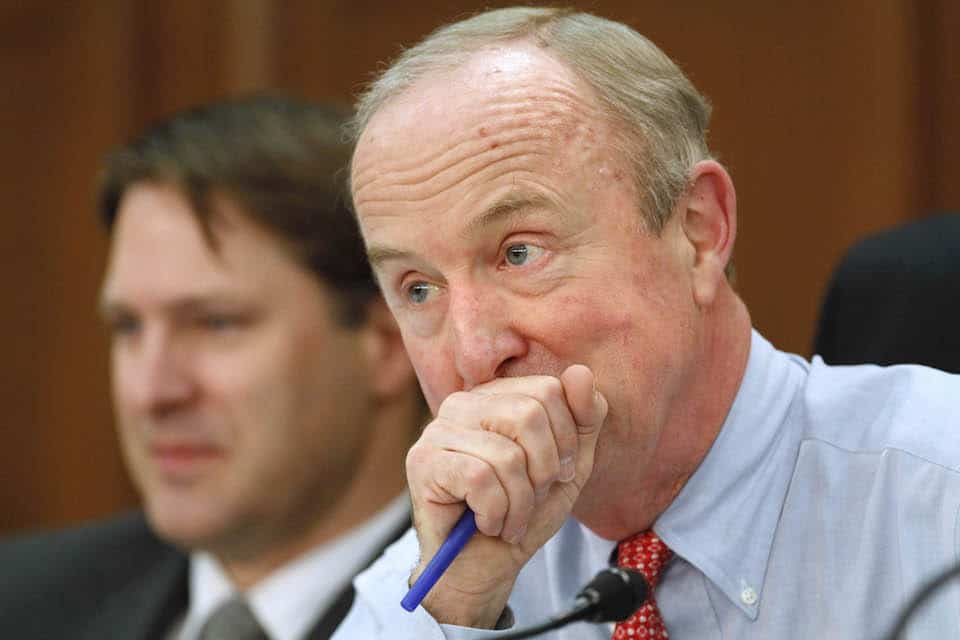 Republican Rep. Rodney Frelinghuysen shamelessly targeted one of his New Jersey constituents, sending a letter to her employer complaining that she was a "ringleader" of protests, a move that led to her resignation from an executive position.

The Nixonian culture that permeates Donald Trump's presidency has filtered down to Republicans at large, as evidenced by the recent actions of Republican Rep. Rodney Frelinghuysen of New Jersey.

Just as Trump targets his "enemies" in the press, his political opposition, and even in the FBI, Frelinghuysen took aim at a woman who protested him, and wrote a letter of complaint to her employer.

The New Jersey Republican sent a fundraising letter in March that complained of "organized forces — both national and local — who are already hard at work to put a stop to" the Republican agenda.

But on the copy he sent to Lakeland Bank board member Joseph O'Dowd — who has also donated to  Frelinghuysen in previous elections — the congressman added a handwritten notation that "One of the ringleaders works in your bank!”

He also enclosed a news clipping that identified then-employee Saily Avelenda as a co-founder of the group NJ 11th for Change, a recently formed group of Frelinghuysen's constituents who called on him to oppose the Trump agenda.

According to Avelenda, that letter contributed to her eventual resignation from the company, after she was "questioned and criticized for her involvement" with the group:

“Needless to say, that did cause some issues at work that were difficult to overcome,” said Saily Avelenda of West Caldwell, New Jersey, who was a senior vice president and assistant general counsel at the bank before she resigned. She says the pressure she received over her political involvement was one of several reasons she decided to leave. ...

“I had to write a statement to my CEO, and at my level as an assistant general counsel and a senior vice president, at this employer it was not something that I expected,” Avelenda said. “I thought my Congressman put them in a situation, and put me in a really bad situation as the constituent, and used his name, used his position and used his stationery to try to punish me.”

The bank's pressure and criticism of Avelenda was a stunning reversal, given in late March, the bank announced her promotion to senior vice president/assistant general counsel, a promotion that surely was in the works before Frelinghuysen's attack.

Frelinghuysen's chilling action drew condemnation from Citizens for Responsibility and Ethics in Washington (CREW) spokesman Jordan Libowitz, who told WNYC that the letter represented a clear abuse of power:

“It’s certainly troubling," Libowitz said. "Whether or not it breaks a criminal statute is one issue, but the very clear issue is that it appears that a member of Congress might be using his power to threaten someone’s employment because of their political activities.”

Lakeland Bank did not respond to WNYC's request for comment, nor has it responded to the multiple posts of the Frelinghuysen story that have appeared in the comments of its Facebook page.

This story is chilling on its own, but it represents a much wider culture of abuse and quashing of dissent that has taken root early in Trump's presidency. The good news is that so far, nothing any of these Republicans do has made the resistance go away, and things like this promise only to strengthen it.