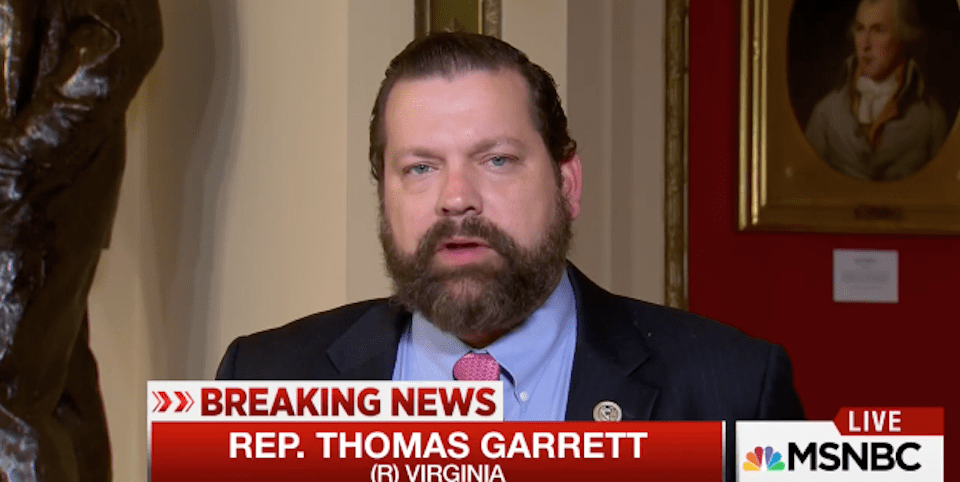 The haphazard and cruel Republican health care repeal plan has a perfect poster boy in Rep. Thomas Garrett (R-VA), who not only confessed he hasn't read the bill, but also dismissively responded to video of constituents whose lives were saved by Obamacare by noting that they probably didn't vote for him.

On the cusp of a rushed vote on the Republicans' health care repeal plan, one GOP lawmaker summed up his party's utter disregard for the harm the bill would do in just 64 seconds of a cable news segment.

In an interview with MSNBC's Stephanie Ruhle, Rep. Thomas Garrett (R-VA) displayed both the carelessness and the cruelty that has characterized the Republican effort. When Ruhle asked Garrett if he had read the bill, he replied with a laugh and said, "That's why we have staff."

Then Ruhle played video of Virginia voters who said that people will die without Obamacare, and Garrett delivered the sort of ice-cold reply we have grown used to from Republicans:

RUHLE: Have you read the whole bill?

GARRETT: Oh, gosh. Let's put it this way: people in my office have read all the parts of the bill. I don't think any individual has read the whole bill, but that's why we have staff.

RUHLE: Is that not a risk? Because people in your office weren't the ones who were elected. Dozens of protesters were kicked off your office property in Virginia earlier this week and they want you to vote no. Take a look at this. [plays video]

CONSTITUENT: It's like whack-a-mole with this House Republicans. One bad bill goes away and another comes up a few weeks later.

CONSTITUENT: People will literally get sick and literally be dying at higher rates than they would otherwise.

CONSTITUENT: The Affordable Care Act for me saved me. It's really a matter of life and death.

RUHLE: People in the State of Virginia, they voted for you not your staff and there were protesters there who said Obamacare saved their life. What do you say to that?

GARRETT: I would wager based on the locality that that particular event occurred in, I wasn't there, that none of those people did vote for me. What I would say is the free market health care system saved my mom's life when she was diagnosed with terminal cancer 30 years ago, that the ability to innovate, the ability to let companies earn a profit to incentivize medical innovations saved my mom's life.

Garrett's response is despicable, but his claim about his own family's experience is arguably worse, though perhaps borne of ignorance.

For-profit health insurance companies don't actually compete for cancer patients in a free market; they drop them. The cancer research that saved his mother was in all probability largely funded by the federal government, which is, by far, the largest funder of cancer research in the world. Insurance companies don't find treatment and cures for cancer; they simply profit from it. According to one estimate, the Republican repeal plan would increase premiums for cancer patients by $140,510.

The Republican plan will allow insurers to profit even more, while purging the sick from their rolls.