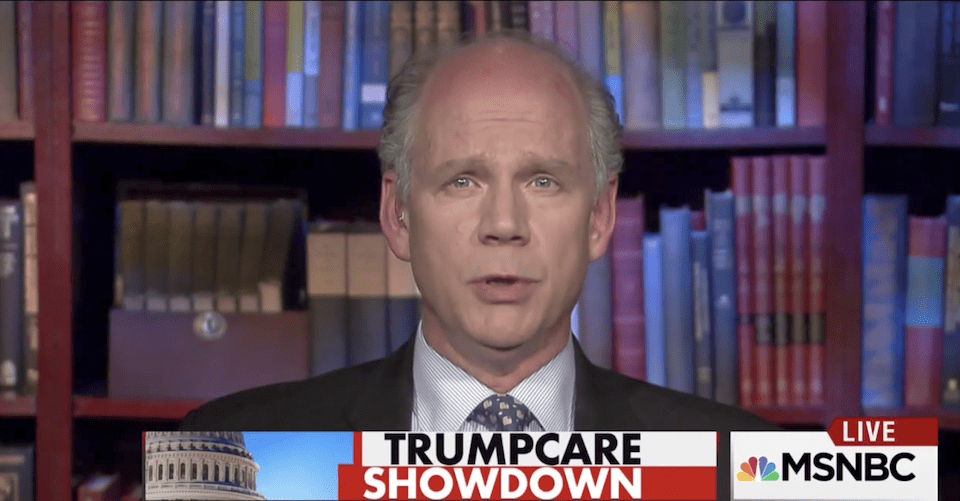 Rep. Dan Donovan (R-NY) surprised MSNBC's Chris Hayes when he said he could not support the Trump repeal plan because the plan's tax credits would be "unusable" by people in states that require insurance coverage for abortion.

As if the list of reasons to hate Donald Trump's health care repeal plan weren't long enough already, one Republican congressman is pointing out a little-reported fact to add to the list.

The original Republican repeal plan, which failed miserably in March, would have thrown 24 million people off their insurance. The new plan has not been scored yet, but by allowing states to opt out of key Obamacare provisions, that number could be much larger.

Additionally, the new plan is a direct attack on women, allowing insurers to charge them more by encouraging insurers to drop maternity coverage. But there is another anti-woman provision that has not been widely reported, and an unlikely source is sounding the alarm: New York Republican Rep. Dan Donovan.

On MSNBC's All In, Donovan told a shocked Chris Hayes that under the new Republican plan, the much lower tax credits that would replace Obamacare's subsidies would not be usable to anyone living in a state that requires insurers to cover abortion care:

DONOVAN: You know, the tax credits that were supposed to help families who are paying $20,000 in insurance premiums, and have $6,000 deductibles and astronomical co-payments. You know, we're offering tax credits to those people to help them buy insurance. Those tax credits are not available to the people in New York. It's illegal to use tax credits to support policies that will provide abortion procedures, and in New York, we require every insurance company to provide abortion procedures. So the help that we were going to give those hard-working people who don't get their insurance from their employer, or who don't qualify for government assistance, who have to buy insurance themselves, we weren't providing them the relief that they deserve.

HAYES: Wait a second. I don't think I figured this out policy-wise before. So what you're saying is that there's actually this kind of train crash for blue states that — or Democratic states or pro-choice states that have these requirements for abortion coverage — and the current text to the Republican bill in terms of the applicability of the subsidies?

DONOVAN: Yeah, the tax credits are unusable. And one of the third things —

HAYES: Wait, how is any Republican in California and New York going to vote for this thing?

DONOVAN: I don't know. I can only account for myself, Chris.

There are 23 Republican members of Congress in New York and California, each of whom would be committing political self-immolation by voting for such a plan.

More to the point, though, the plan would leave almost 67 million people in three states — New York, California, and Massachusetts — without access to those tax credits. That's because the provision does not just apply to the individual market, but also to small businesses and to employer-based COBRA coverage.

As The New York Times points out, this could lead insurers in other states to eliminate coverage for abortion care altogether:

If the measure is passed, abortion rights advocates fear it could compel insurers to stop offering abortion coverage at all.

“There’s no reason insurers would sell any plans that cover abortion because everyone would be wanting to use these tax credits,” said Adam Sonfield, a senior policy manager for the Guttmacher Institute, a research center that works to promote access to abortion. ...

Employers might decide not to offer abortion coverage, knowing that their employees, if they left, could not use their tax credits to continue that policy.

Trump's 11th-hour attempt to chalk up a health care win before his 100th day in office is already a failure, but Republicans are still trying to get this plan through in the next few weeks. Provisions like this one are exactly why the resistance will not let up, and why this repeal plan is doomed to fail.