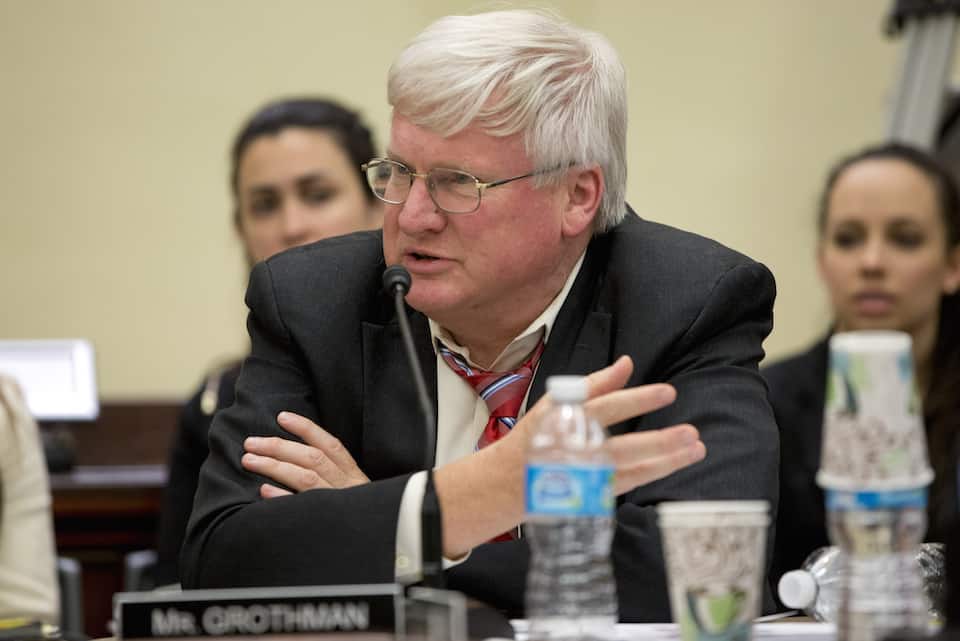 Republican Rep. Glenn Grothman returned to his home in Wisconsin recently, where he held a town hall that went quite badly for him and ended up with a roomful of constituents yelling at him to "be honest" about Planned Parenthood and the health care it provides.

Rep. Glenn Grothman, a tea party Republican from Wisconsin, has some terrible and terribly ignorant ideas about how American families get by. And about grocery stores.

At a town hall in 2015, Grothman encouraged shoppers to be on the look out for anyone they might suspect of fraudulently using government assistance, claiming that "some people are arranging their life to be on Food Share" (the state's food stamp program).

Grothman has long been a vociferous opponent of government aid in general, even for the "genuinely poor," and has often preached against welfare, based on his false assumption that people who receive government assistance never really need it and are usually running a scam on taxpayers.

As a state senator, he even argued against a labor law that required employers to give workers at least one day off per week, calling it "a little goofy."

In other words, Grothman, who has no sympathy for the poor and opposes food stamps and weekends, is most certainly not an advocate for American families.

At a recent town hall in Neenah, Wisconsin, Grothman proved that yet again, defending his abhorrent positions and votes to block patients from accessing health care at Planned Parenthood with a new and twisted idea about grocery stores:

WOMAN: As you know, federal funds currently do not pay for abortions. Planned Parenthood provides life-saving health care to millions of women. [applause and cheers] I have a 35-year-old daughter who uses their services because she does not have employer health benefits. Help me to understand why you want to defund Planned Parenthood. And please do not use abortion as an excuse. [applause and cheers]

GROTHMAN: Planned Parenthood is the biggest abortion provider in the country.

The crowd immediately booed his response and demanded that he "be honest," and he struggled to be heard over the constant questions and sounds of disapproval.

GROTHMAN: You look at every city, and you can get birth control in, I would guess, in Neenah—

WOMAN: You would guess?

GROTHMAN: ... uh six or ten different places. In pharmacists [sic], in many grocery stores, not to mention you can get it in a variety of clinics.

WOMAN: I've never gotten a prescription from a grocery store.

GROTHMAN: My guess is, in a city the size of Neenah ... there have to be six or eight clinics where you can get birth control.

WOMAN: But what about rural communities?

GROTHMAN: I don't respond to questions out of the blue. But I will say this: If you look at where all the Planned Parenthood clinics are in the state of Wisconsin, they are usually in more urban areas. I looked one time and got a list of all the clinics, Planned Parenthood clinics, in the state of Wisconsin. I don't think there were any that I'm aware of, just pursuing it, in which you would say the village was so small that they didn't have any other health care providers. I mean, they'll throw that out, but if you look, it is usually in larger areas.

Anyone who has ever sought contraception, other than condoms, knows that it cannot be obtained at the grocery store. Condoms are excellent prevention against pregnancy and STDs, but they do nothing to address common medical issues for which contraception is a treatment. Most of the nearly two dozen types of birth control on the market require a prescription — which, as a woman at the town hall pointed out, cannot be obtained at a grocery store.

That is why women go to their doctor, not their grocer, for their reproductive health care needs.

It should go without saying that a legislator whose full understanding of Planned Parenthood is based on his fact-free assumptions, his guesses about a list he claimed to have perused one time, and his party's ideological agenda against women's health care has no business legislating health care at all.

Because anyone who would suggest that grocery stores are an acceptable alternative to health care centers clearly has no idea what he is talking about.