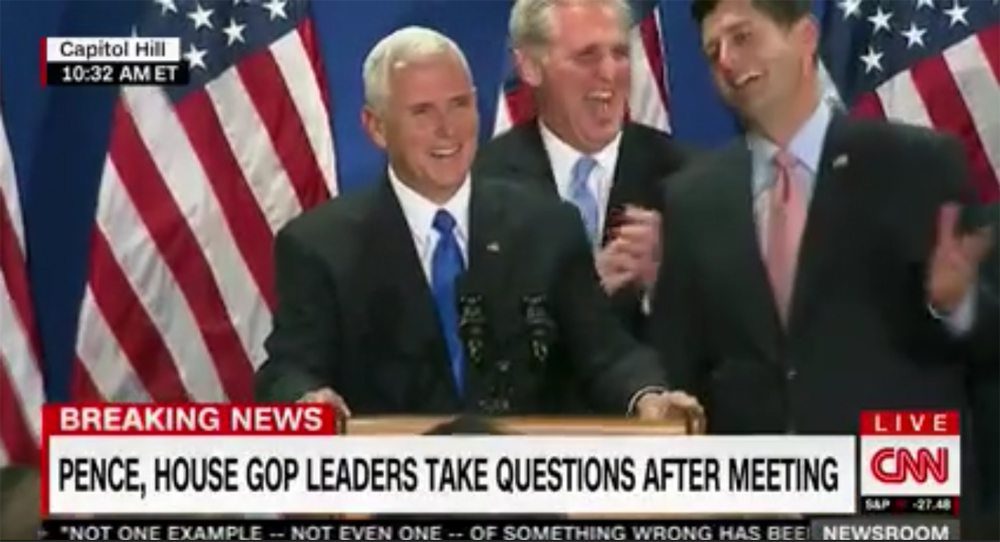 Melissa McEwan
Get The American Independent in your inbox

During a press conference with Mike Pence, Paul Ryan, and other Republican leaders, a reporter asked a question about Ryan's failure to enthusiastically support Donald Trump. A same-party Speaker having profound reservations about his party's nominee is a serious—and possibly unprecedented—issue. But it's all a big joke to the GOP leadership and the attending media.

Watch as a reporter begins to ask about Ryan's criticisms of Trump, and Ryan interrupts with a joke, prompting a huge round of uproarious laughter:

When everyone finally settles down, Pence finally gives a punt of an answer about how much he and his running mate respect Ryan and how there are always differences in a party.

This answer is patently ridiculous. It is unheard of that the Speaker would not vigorously support his or her party's nominee.

But Pence is let away with his absurd spin—and no further scrutiny is given to this alarming divide within the Republican establishment. Or the concerns about Trump precipitating it.

It is yet another moment of clarity about the role of the press, who did not act as pursuers of truth but as wanna-be pals of the politicians they're meant to hold to account.

This, as they say, is why we can't have nice things.