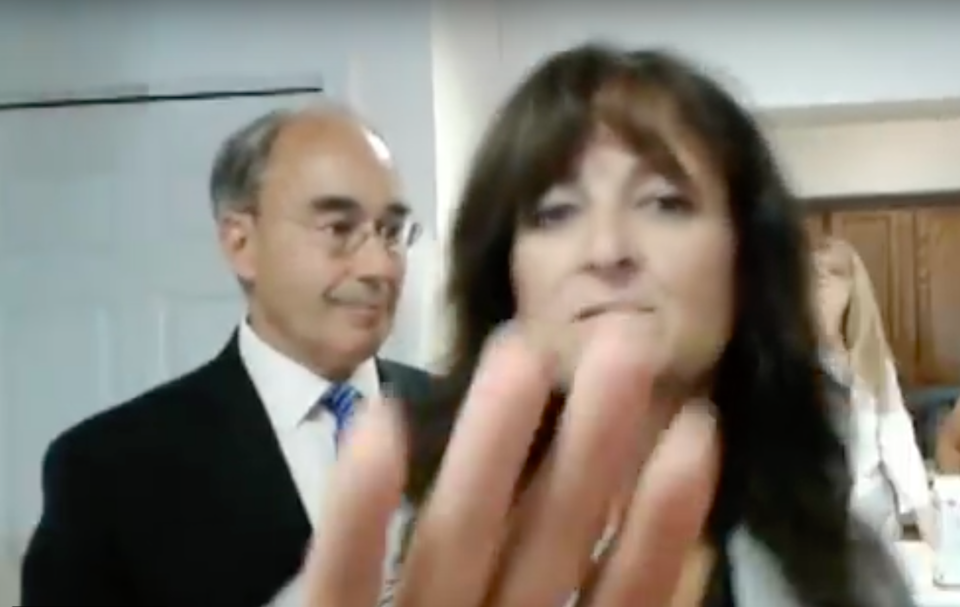 Maine People's Alliance
Get The American Independent in your inbox

During a visit to senior living community, Maine Republican Rep. Bruce Poliquin was confronted over his support for the Republican health care repeal bill and its cuts to Medicaid. Poliquin had no response, and instead turned his back on a concerned citizen.

Rep. Bruce Poliquin (R-ME) was forced to make a hasty retreat from a senior living facility when he was confronted by citizens about his vote for the Republican health care repeal bill.

Poliquin told attendees that he would answer questions after his press conference, but as soon as the reporters turned their cameras off, he ignored their shouted questions and left the building.

Video of the encounter recorded by Maine People's Alliance shows Valerie Walker attempting to ask Poliquin how she will address the health concerns of her son, who has a disability, if the cuts to Medicaid he voted for become law.

Instead of responding to her, Poliquin complained about her presence, asking, "If you’re not a resident — I think this is just for residents, isn’t that correct?"

And a woman accompanying him actually tried to physically block the camera recording the exchange, when Poliquin was told that the room is a public space and Walker was free to be there. So he simply walked away from her to give his presentation to the broadcast cameras.

The Maine Beacon reports that Walker's child suffers from a chromosomal condition called Klinefelter syndrome, as well as diabetes, autism, and post-traumatic stress disorder (PTSD). She told the paper, "I take care of everything for him. I worry about what’s going to happen to him when I’m not around, and I worry he can’t get his medicine."

After Poliquin gave his speech and spoke to the press, he was pressed to "keep his promise" and answer Walker's questions.

Instead, he headed for the nearest exit, disregarding the voices of his constituents.

Kathy Record, also in attendance, told the Beacon, "He was ignoring those questions, he wasn’t even responding to them. Hundreds of thousands of people are going to be affected by this if it goes through. He’s really screwing people over and it’s not right."

The GOP's health care bill is one of the most unpopular pieces of proposed legislation in recent history, largely thanks to the multi-billion dollars worth of cuts it would administer to Medicaid — over $770 billion — and the fact that it would lead to over 22 million Americans being stripped of their health insurance.

Additionally, the bill would kill over a million jobs and allow insurance companies to charge exorbitant fees for people with pre-existing conditions, which they are currently prohibited from doing under Obamacare.

Republicans up for re-election in 2018 face the prospect of defending the bill pushed by their leaders in both Congress and the White House, and could suffer major electoral losses as a result.

Poliquin may be feeling confident, as he won his re-election bid in 2016 by nearly 10 percent, in a state went for Hillary Clinton by 3 percent. But the Cook Political Report currently rates the race as only "likely" Republican for the 2018 midterms. And the Democratic Congressional Campaign Committee (DCCC) has rated the seat as one of their targets for the year.

DCCC Spokesman Evan Lukaske responded to Poliquin's escape tactics in a statement noting, "Representative Poliquin can run from his constituents but he won’t be able to hide from them at the voting booth."

He added, "Poliquin voted to increase premiums on Maine families, gut protections for pre-existing conditions and to devastate rural Maine’s healthcare. This vote will haunt him all the way to Election Day."

Trump is running the ugliest of smear campaigns against Kamala Harris