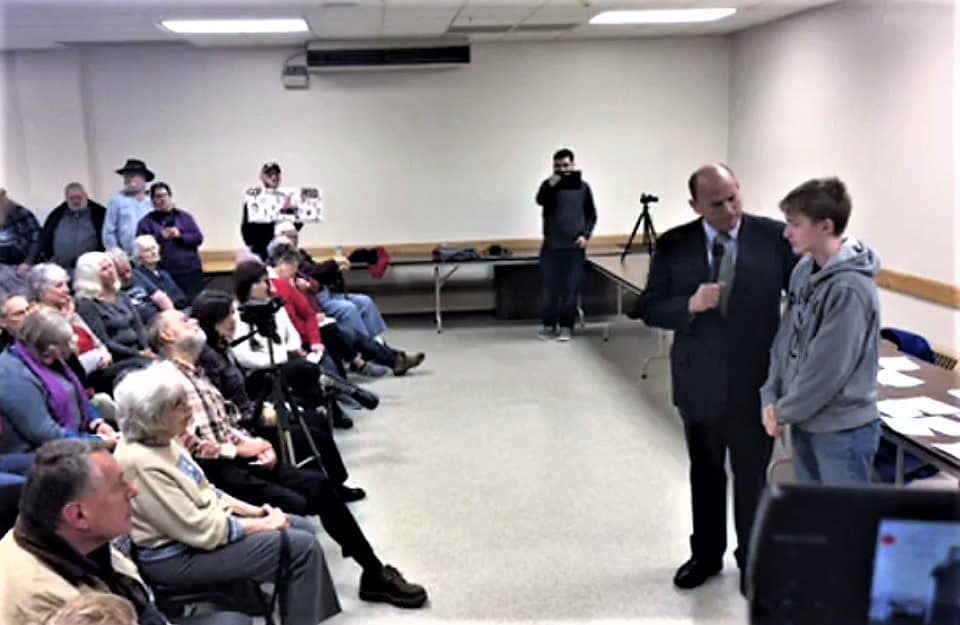 When Republican Rep. Tom Reed was asked how he could justify voting for the cruel and disastrous Republican health care repeal plan, Reed responded with an outright lie.

At a recent town hall in Hinsdale, New York, Republican Rep. Tom Reed displayed both cruelty and dishonesty when he lied right to a young constituent's face about the disastrous GOP bill to repeal Obamacare, which the House passed on a strictly partisan vote last week.

At the event in Hinsdale, 14-year-old Robert Shuryn explained to his congressman that he has Type 1 diabetes, and asked Reed to look him in the eye and explain how he could vote for a bill that "take(s) away my guarantee of affordable health care?"

Reed put his arm around the young man, said that his own son is a Type 1 diabetic, and then lied right to the Robert's face:

SHURYN: I'm 14 years old and I am from Wellsville, New York. I have been living with Type 1 diabetes since I was 4 years old. My question is, well, look at me, a 14-year-old boy, in the eye, and justify how you can vote for a bill that will take away mine, and millions of others', guarantee of not being discriminated against because of a pre-existing condition. I didn't ask for this. I was born with it. Justify to me how you can take away my guarantee of affordable health care? Because without it, I can't purchase my diabetic — my medical supplies, and without those I can't live.

REED: I'll look you in the eye, I'll do you one better. As the father of a type 1 diabetic who held his son when he was 4 , and diagnosed with it, and I'm sure you went through a very similar experience. The fact that pre-existing conditions is in the bill, and it's in this bill, is going to continue, and you will have access to health insurance just as you do today.

CONSTITUENT: At what cost?

The fact is that the Republican repeal plan doesn't give Shuryn "access to health care just as he has today." It allows states to charge people with pre-existing conditions up to $140,000 a year, depending on the condition.

Reed even had the nerve to use the young man he lied to as a photo op:

Final stop of the day in Hinsdale. Thanks to all who came out. pic.twitter.com/vpL2jJe67O

But Reed wasn't done lying to his bravest constituents just yet.

At another town hall this weekend, a kidney donor confronted Reed over the same issue, explaining that his heroic act would now be punished as a pre-existing condition under the Republican repeal plan. Reed responded with a string of lies, including that the GOP plan only allows insurers to charge 30 percent extra for those with pre-existing conditions who experience a lapse in coverage.

The bill actually requires companies to charge 30 percent extra to anyone, healthy or not, with a lapse in coverage. But it also gives states the right to allow insurance companies to use "health status rating" instead, which allows for those exorbitant surcharges. There is no set cap on those surcharges.

Reed once again used his own son's medical condition for political cover and made this stunning and false claim:

As a father of a child who has Type 1 diabetes, another pre-existing condition, I am looking at this in exactly the same way you are.

Reed probably is not looking at this "exactly the same," though, because Reed enjoy excellent taxpayer-funded health insurance.

Reed and his fellow congressmen should not have to worry about their children being effectively denied health care, but neither should any of the Americans they represent, no matter whom they voted for.

Trump spent the week lying about veterans, voter fraud, and his wall