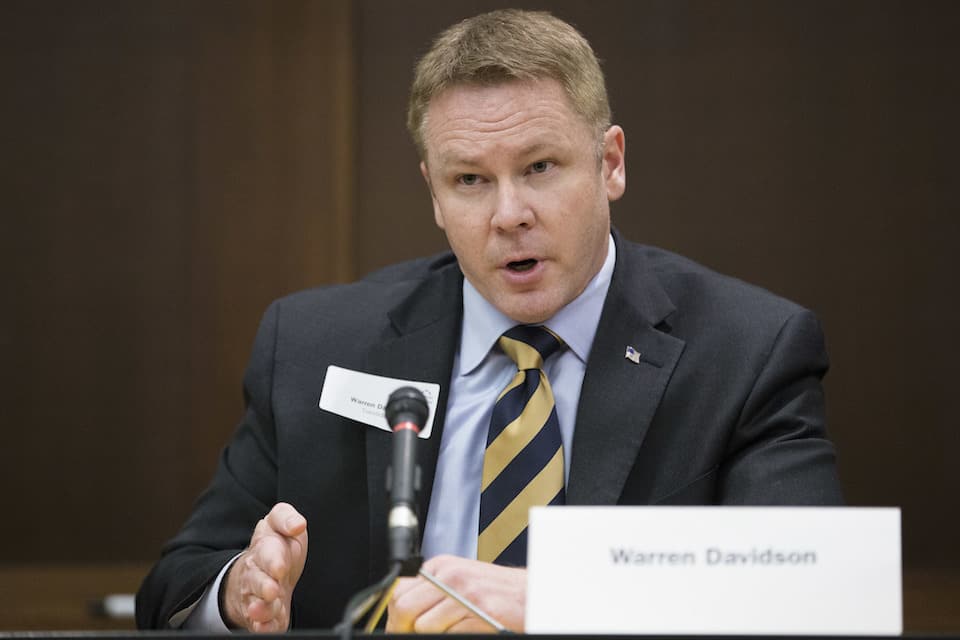 When a concerned mother confronted Rep. Warren Davidson (R-OH) about his support for Donald Trump's destructive health care plan and how it would deny her son access to health care, the congressman told her that her son's skills in the service industry meant he is not good enough for insurance coverage.

Republican Rep. Warren Davidson of Ohio, the tea partier who replaced former House Speaker John Boehner, appeared unmoved at a town hall meeting, when a mother told him about her fears for her son's health. She explained that her son's health care coverage was only possible because of Obamacare's provision for Medicaid expansion, and that the Republican repeal plan would kill it.

Instead of sympathizing with a constituent understandably worried about her child's well-being, Davidson cited her son's "skills" as justification for why Donald Trump's plan would exclude him. He added, "I don't believe that these taxpayers here are entitled to give that to him" and suggested her son "go earn those health benefits" — a response that immediately provoked boos from the crowd.

Holy sh*t, Davidson tells a woman whose son is on Medicaid expansion, would lose insurance under repeal, that his "skills" are to blame. pic.twitter.com/UiERBOIQ5T

Under Trumpcare, one of the major ways to make health insurance affordable is to bring back catastrophic insurance, which is basically no insurance at all. Given that, given that preventative health care is the number one way to keep people healthy in our society. Can you explain why my son and millions of others in his situation are not deserving of affordable, decent healthcare that has essential benefits so that he can stay healthy and continue working?

DAVIDSON: OK, I don't know anything about your son, but as you described him, his skills are focused in an industry that doesn't have the kind of options that you want him to have for health care. So, I don't believe that these taxpayers here are entitled [sic] to give that to him. I believe he's got the opportunity to go earn those health benefits.

Davidson's indifference is symptomatic of the failed American Health Care Act, which would have stripped coverage from 24 million people and tilted the system away from helping seniors. These provisions, along with a tax cut for the wealthy and provisions designed to line the pockets of health care executives, prompted overwhelming opposition from voters across the country, including Republicans, only 37 percent of whom supported it.

Voters care about the well-being of their loved ones and fellow citizens and do share not the mean-spiritedness of the
Republican Party, so perfectly demonstrated by Davidson at his town hall. That is why, despite the puzzlement of Trump administration officials, Democrats opposed the bill as a bloc, and why future versions of the legislation will continue to face major opposition.

These town hall confrontations continue to show that the victims of the GOP's policy choices are not just faceless numbers, but real people who will suffer serious consequences if Obamacare is repealed. Still, Republicans remain beholden to their cruel ideology and the leader of their party — a choice that may doom them with their constituents.