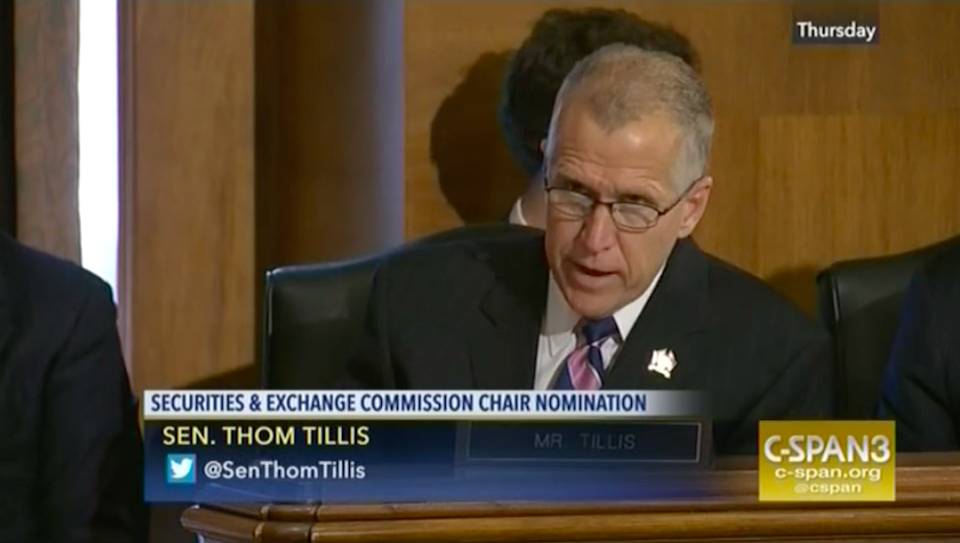 Republican Senator Thom Tillis leapt to the defense of multi-millionaires at Goldman Sachs, while inexplicably describing them as "little guys."

Clayton is a Wall Street lawyer who has done work for Goldman Sachs. Senator Elizabeth Warren (D-MA) pointed out during the hearing that if he secures his nomination, Clayton would have to recuse himself from SEC enforcement decisions involving Goldman Sachs. The proposition is not trivial, because as Huffington Post points out, "Goldman Sachs has faced a long list of charges that it’s run afoul of the law."

Tillis apparently objected to this line of discussion, and when it was his turn to ask questions, he took Goldman Sachs' side. Tillis complained about people in Congress who "want to just beat down job creators and employers" like Goldman Sachs where "there's probably a lot of little guys."

TILLIS: Something else that — I feel like sometimes I'm living in a reality TV version of Atlas Shrugged. There are a lot of people in this Congress that want to just beat down job creators and employers. And I just decided just on the fly — and I'm glad my staff's able to respond to my random request — but just take a look at Goldman Sachs. People want to demonize Goldman Sachs. That's an easy thing to do, right? Just beat up on a financial services institution. An institution that's committed to — let me look at the general numbers here — they have 36,500 employees. There's probably a lot of little guys in there. They've contributed billions of dollars to nonprofits. They've got a commitment to producing 150 billion — am I right? — between now and 2025, that are either capital formation for nonprofits or directly into nonprofits. Demonizing employers that employ the little guy isn't looking out for the little guy.

Goldman Sachs is a blue-chip company that is publicly traded on the stock market, and has assets worth $860 billion. In its most recent year of revenue, it took in $37.71 billion. Multiple key government officials have come from Goldman Sachs, including former Treasury secretaries Robert Rubin and Hank Paulson, along with current Treasury Secretary Steve Mnuchin. Despite Trump's rhetoric slamming the company during the campaign, four former Goldman Sachs executives serve in the Trump administration.

Describing the company, with its vast wealth and influence, as anything remotely resembling the "little guys" is a testament to the distorted view espoused by Republicans in Congress, and a stunning commentary on where the party truly stands.