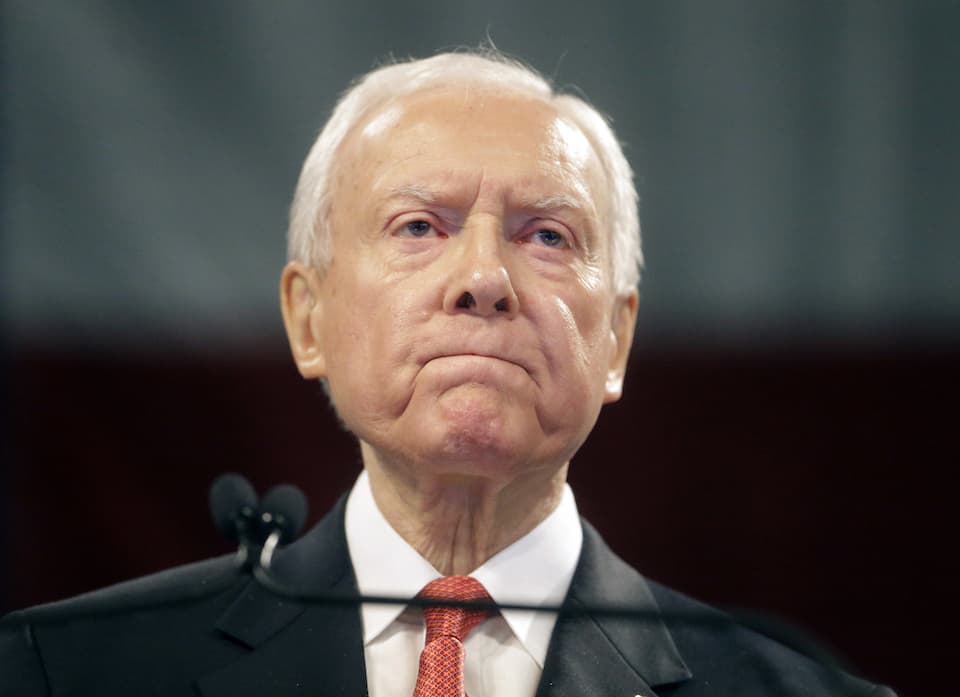 To Orrin Hatch, it's OK to commit felonies if you're a Republican.

Sen. Orrin Hatch, the retiring Republican from Utah who will be replaced by failed presidential candidate Mitt Romney, really doesn't have a problem with fellow Republicans who commit crimes.

Asked to respond to recent court filings that directly implicate Trump in a felony, Hatch first tried to deflect by suggesting Democrats had somehow made the whole thing up.

"The Democrats will do anything to hurt this president," Hatch said.

But this very serious and very credible allegation against Trump comes from federal prosecutors, not Democrats. Prosecutors in the Southern District of New York laid out the case in a sentencing memo for Michael Cohen, Trump's former lawyer.

After this was pointed out to Hatch, however, he kept shrugging it off.

This is not the first time Hatch has made clear he doesn't care about the law — so long as it's a Republican who's breaking it.

During the disgraceful confirmation hearing of Brett Kavanaugh to the Supreme Court, Hatch said he didn't care if Kavanaugh had in fact attempted to rape a girl, as he was credibly accused of doing.

"If that was true," Hatch said in September — "that" being the allegation by Dr. Christine Blasey Ford that Kavanaugh pinned her down, covered her mouth, and tried to rape her when they were both in high school — "I think it would be hard for senators to not consider who the judge is today. That’s the issue. Is this judge a really good man? And he is. And by any measure he is."

Hatch, like the rest of his fellow Republicans in the Senate, went on to vote for Kavanaugh to receive a lifetime appointment to the highest court in the land.

The Republicans voting for Kavanaugh claimed on the one hand that they did not believe the serious charges against him — but on the other hand, they didn't care if the charges were true anyway. Being an attempted rapist was not disqualifying, according to Hatch and other Republicans, because they wanted Kavanaugh on the court. And nothing, not even attempted rape, would stop them from voting for him.

Now Hatch is making the same case for Trump and the felony in which he is implicated. It's probably not true, Hatch argues — but even if it is, so what? Why should we care whether the president of the United States directed criminal acts for the explicit purpose of trying to win an election?

"I don’t think he was involved in crimes," Hatch added without giving evidence of Trump's supposed innocence, "but even then, you know, you can make anything a crime under the current laws; if you want to you can blow it way out of proportion, you can do a lot of things."

To be clear, the court papers filed last Friday implicate Trump in a serious felony; we're not talking about simply running a red light here.

As Rep. Jerrold Nadler (D-NY), the incoming chairman of the House Judiciary Committee, put it, the latest documents suggest that Trump "was at the center of a massive fraud against the American people."

That's far more serious than Hatch is acknowledging. But Hatch, as he said, doesn't care. Hatch thinks Trump is doing a "good job," and that's all that matters to him — even though most Americans would beg to differ.

It's no wonder Hatch's own local paper, the Salt Lake Tribune, famously ripped him to shreds in an op-ed last year for his blind fealty to Trump. The editors slammed him for his "utter lack of integrity that rises from his unquenchable thirst for power" and for shamelessly "sucking up" to Trump.

Hatch has certainly done plenty of that. Last year, he even said that Trump's presidency might be the greatest "we've seen not only in generations but maybe ever" — an absurd and demonstrably false claim.

Now, as Hatch's time in the Senate comes to an end, he's apparently trying to use his last days to make sure he is remembered for his embarrassing fawning and excuse-making — and, as his hometown paper put it, for his utter lack of integrity.