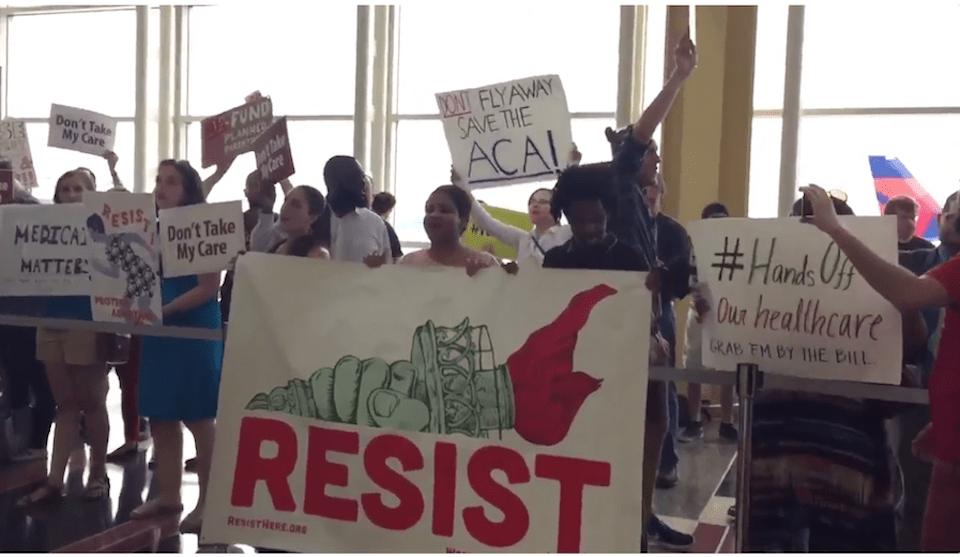 Diane McMahon‏/Twitter
Get The American Independent in your inbox

Senate Republicans finally revealed their disastrous health care bill, and now they're trying to get out of town for the weekend. But voters have a message for them before they go.

The reaction to the long-awaited secret Senate bill to destroy health care and give tax cuts to the rich is not going well for Republicans.

No one was expecting it to be good news, but it turns out that the Senate version — crafted in secret, by a group of 13 Republican men — is even worse than the House version, which would gut Medicaid and kick 23 million Americans off their insurance. The Senate version does all that and more.

But before senators fly home for the weekend to meet with their constituents — or, more likely, to dodge their constituents — they will have to get past the protesters who showed up at Reagan National Airport, just outside of DC, to let those senators know how fiercely opposed they are to this monster of a bill.

Protesters waved their homemade signs and chanted at the senators, "CEOs are getting paid with the cuts to Medicaid!" and "Why are we in this fight? Health care is a human right!"

Iowa Republican Chuck Grassley was asked whether he is OK with people losing health care, and he walked away, refusing to answer.

It would be a huge mistake for Republicans to enact their horrendous bill that kicks millions off their insurance, defunds Planned Parenthood, and forces patients with pre-existing conditions to lose their life-saving health care — all to give tax cuts to the rich.

As President Barack Obama wrote on Facebook, "The Senate bill, unveiled today, is not a health care bill. It’s a massive transfer of wealth from middle-class and poor families to the richest people in America."

Republicans might be able to hop a plane out of town to avoid the wrath of Americans now, but they won't have such an easy getaway come Election Day.