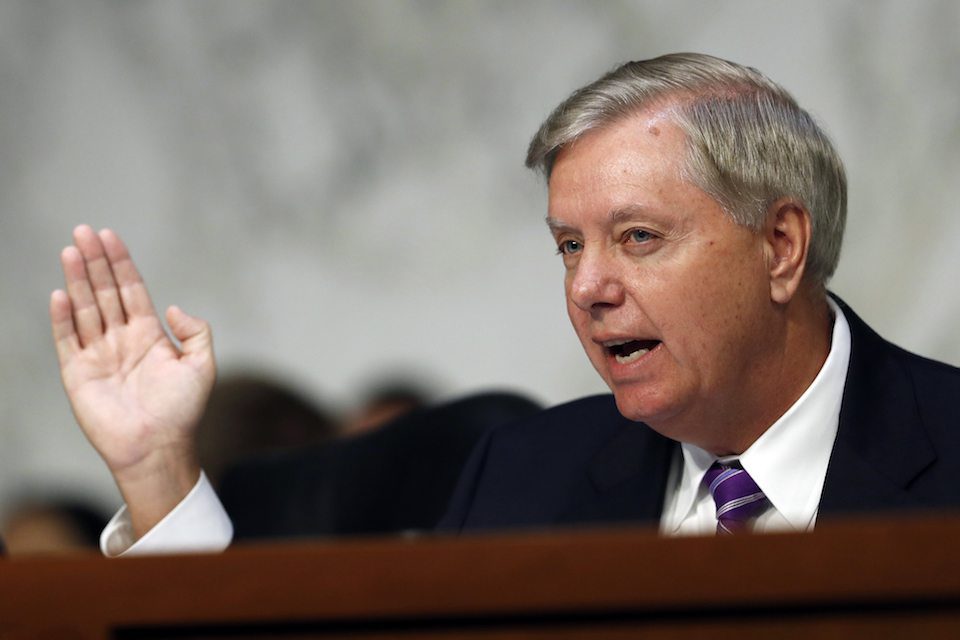 Republicans descend into internal squabbling over whether Trump did or did not use hateful language during an immigration meeting last week.

Sen. Lindsey Graham (R-SC) is being hung out to dry as the Republican Party's defense of Donald Trump's racist and vulgar "shithole" comment last week regarding black immigrants to the U.S. has devolved into a Keystone Kops routine, with various players blindly bumping into each other.

Trump made his disparaging remarks in a roomful of grownups, including Graham and Democratic Sen. Dick Durbin, who has publicly confirmed them. As for the Republicans in the room, their responses continue to ricochet around the Beltway, depending on the day of the week and the level of White House panic.

Graham essentially confirmed the remarks and reportedly admonished Trump during the meeting. Meanwhile, other Republicans present opted for a fuzzy memory defense. (Who would forget if the POTUS blurted out "shithole" during a policy meeting?)

Keep in mind, White House aides confirmed the "shithole" comment when the story first broke. In fact, they reportedly loved it, took a "victory lap," and insisted it played well with Trump's racist base.

But now, that's all changed and there has been a collective memory shift. So on Sunday, Republican Sens. Tom Cotton of Arkansas and David Perdue of Georgia were marched onto the morning shows to both update their earlier claims from Friday that they couldn't remember if Trump had said "shithole" during the meeting. Now they're declaring definitively that Trump did no use the vile term. And they're calling Durbin a liar.

Oh, and maybe Trump said "shithouse" instead of "shithole."

On Meet the Press, Kentucky Sen. Rand Paul insisted the only thing he regrets about Trumps racist rant isnt that Trump might be a racist, it's that people are calling him one.

But again, this all leaves Graham out in the cold because with the White House radically altering its "shithole" talking point, Graham's public statements mean he's in direct opposition to the "shithole" cover up.

On Monday, Graham tweaked Cotton and Perdue, insisting his memory had not "evolved" on the matter:

New: @LindseyGrahamSC declines to confirm "shithole countries" comment but tells me, "My memory hasn't evolved. I know what was said and I know what I said."

So the GOP civil war rages on.

Meanwhile, Democrats have not changed their position on any of this. The denunciations have been thundering and unequivocal.

If the president cant control himself and lead this country with the authority, dignity and leadership it requires, then he shouldnt be the president, Sen. Dianne Feinstein (D-CA) said last week. Theres no room for racism in the Oval Office.

Meanwhile, there's a movement among House Democrats to officially censure Trump for his racist attacks on immigrants.