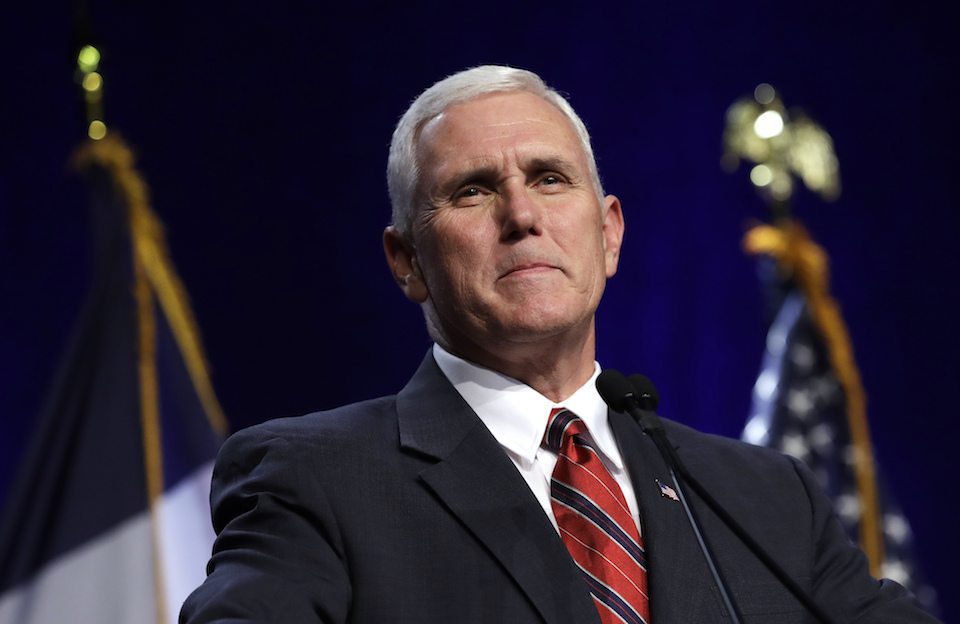 (AP Photo/Charlie Neibergall, File)
Get The American Independent in your inbox

The GOP's chief morality cop still has nothing to say about the possibility of electing an accused child molester to the U.S. Senate.

It seems everybody has opinion about Roy Moore's controversial U.S. Senate campaign. Everybody except Vice President Mike Pence, who can't bring himself to comment on the pressing GOP matter.

"Pence’s silence is being complicit," Rick Tyler, a GOP strategist and former spokesman for Sen. Ted Cruz tells Bloomberg. "He’s trying to sit it out. I don’t know where he stands. He’s not providing any leadership."

Indeed, while Trump rushes out in front of the Moore campaign, making robo calls and openly endorsing the accused child molester in hopes of claiming credit for his win, it's been radio silence from Pence on a story that has been roiling the GOP waters for more than a month.

His spokesperson released a tepid statement after the story first broke, saying Pence "found the allegations in the story disturbing and believes, if true, this would disqualify anyone from serving in office." He has not commented directly.

What makes Pence's silence especially cowardly is the fact he's built his political brand around being a holier-than-thou morality cop. Pence has actively marketed himself as a pious "family values" figure within the "religious right."

In his sermon-like speech to the right-wing Values Voters Summit last year, Pence promised that he and Trump would "restore this nation" with "public virtue," which would emanate "from the traditional institutions of our nation — life, family and religion."

Instead, Pence is confirming that there's nobody in the administration who's willing to stake out any kind of high ground with regards to the unfolding Moore fiasco. He hasn't made himself available to the mainstream press for weeks, likely because he doesn't want to be asked if he supports an accused child molester for the U.S. Senate or whether hes believe the woman who claims Moore sexually assaulted her when she was 14 years old.

Lots of leading Republicans got caught on the wrong side of the Moore scandal, because they never thought Trump, the leader of the Republican Party, would endorse an accused child molester.

When news of the allegations first broke in early November, more than one dozen Republican senators, including Senate Majority Leader Mitch McConnell, called on Moore to drop out of the race. But when the White House made clear they wanted Moore to win, most of those GOP voices went quiet.

And Pence has been leading the silence brigade.