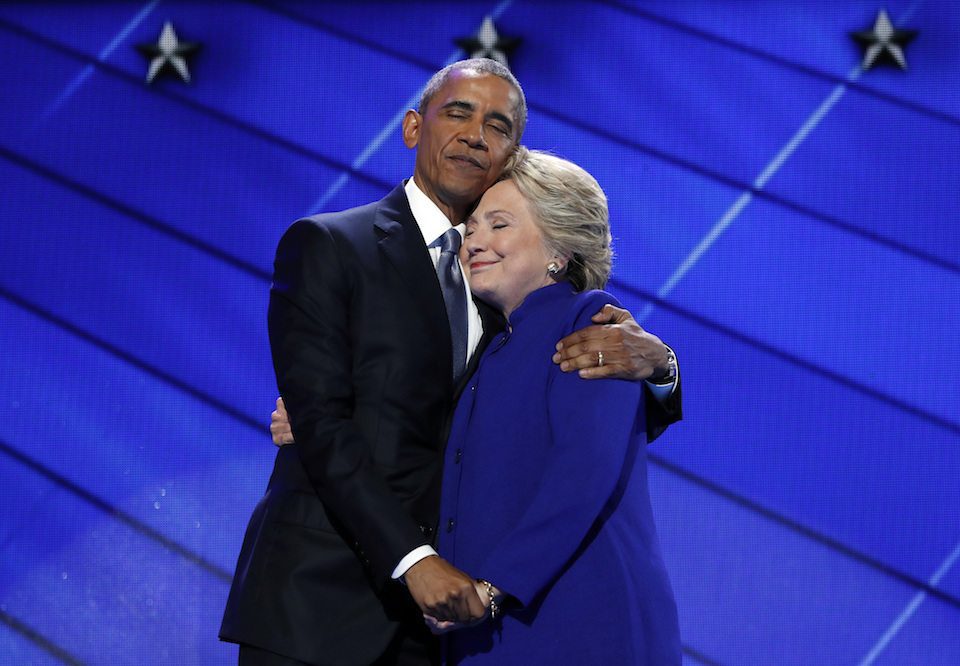 Welcome to your daily roundup of good news about good people, how you can help make a difference — and a picture of President Obama (and Hillary!) to help you celebrate!

It was nothing short of an amazing, historic night for Democrats — and for the nation. From Virginia to New Jersey, Maine to North Carolina, we watched win after win roll in, as love won out over hate, and progress over backward ideology.

The major news of the night was Virginia, where Democrat Ralph Northam soundly defeated Republican Ed Gillespie and his embrace of Trumpism. Gillespie's racist campaign was rejected by a commonwealth still healing from the bigoted riots in Charlottesville in August — one that knew Northam would be the one to help move them to a brighter, safer future.

Also in Virginia came a truly historic and incredibly important win, when Danica Roem, a transgender woman, beat the extremely anti-LGBTQ Republican Bob Marshall and won a seat in the House of Delegates. Indeed, Virginia voters helped flip 14 seats, in a blue wave that outpaced the state's electoral history going back over a century!

In addition to Roem, other inspiring wins include Kathy Tran, Virginia's first Asian American delegate; Hala Ayala and Elizabeth Guzman, the first Latinas in the Virginia House of Delegates; and Justin Fairfax, Virginia's new lieutenant governor and only the second African-American to hold statewide office.

Thanks to record turnout, Virginians really got it done!

It really was quite a night — so much so that you may not even know about all of it! Let's review, shall we?

Way up north, voters in Maine easily passed a referendum to expand the state's Medicaid program under Obamacare, the first state to do so. At least 80,000 Maine residents could become eligible for the program.

In Minneapolis, Minnesota, Andrea Jenkins won her race for city council, making her the first openly transgender woman of color elected to public office of a major city in the United States. And St. Paul elected Melvin Carter as it mayor, making him the first African-American to hold the office.

Boston, Massachusetts, elected a record-breaking number of women to its city council and brought the council's total of women of color from just one to five — the most diverse in the city's history.

And in Charlotte, North Carolina, Vi Lyles became the city's first woman of color mayor, winning handily despite being outspent by her Republican opponent.

ACTION ALERT: Celebrate the wins, and get ready to work for more

Tuesday night was a good one, but there's no rest for the (happily) weary:

Tonight was a great night for Democrats, but now more than ever, we know we can't get ahead of ourselves. Sign up to make today's victories tomorrow's victories too: https://t.co/qFBOfVnMjt

We're one year past the presidential election, and one year away from the most crucial midterms in modern history. The time to start working to make D.C. as blue as last night's headlines is right NOW. Sign up, speak out, and save the date.

Democrats will push for DACA fix in government spending bill

Senate Democratic Leader Chuck Schumer announced that Democrats will fight to get a legislative fix for the Deferred Action for Childhood Arrivals (DACA) program in the end-of-year omnibus spending bill.

After the Trump administration declared it would be phasing out the DACA program by early March, it became crucial that Congress pass a legislative replacement to protect the roughly 800,000 young undocumented immigrants from deportation away from the only home many of them have ever known.

Schumer believes they can win some Republican support for the idea, since the GOP will need help from Democrats to get the spending bill onto Trump's desk and prevent a government shutdown — one that would be the fault of intransigent Republicans.

Tuesday night's massive victories were just what a lot of folks needed, as we come to the one-year anniversary of a very (very) different election night.

But there's another way to think of this day:

You know what Hillary would tell you: "Do all the good you can, for all the people you can, in all the ways you can, for as long as you can."

So honor her legacy, and make her proud: visit nastywomenserve.com to find a whole host of ways to do good, then get out there and do it, and spread the word, too.