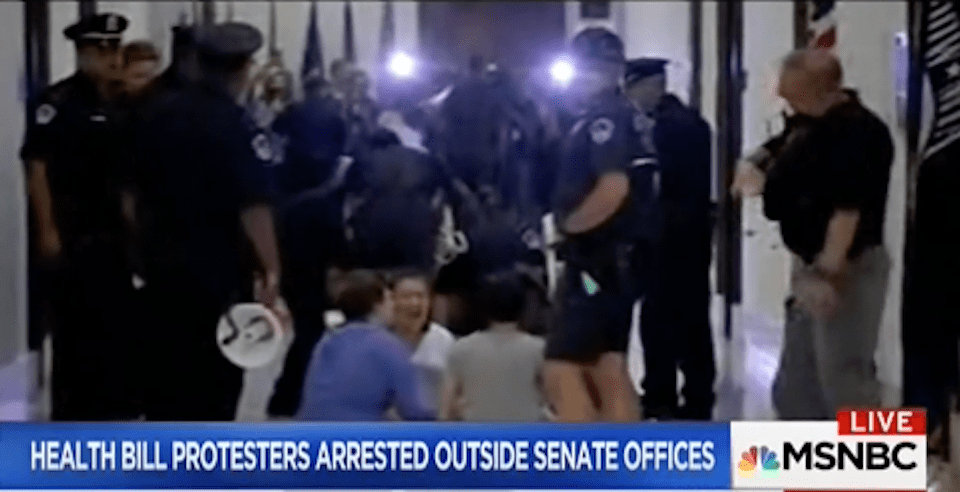 With their lives at risk, Americans are continuing to put their bodies on the line to fight for health care.

While Donald Trump claims the Medicaid cuts will be "great for everybody," protests are intensifying against the Republican efforts to enact those cuts and to repeal Obamacare.

Many see the Senate decision to delay a vote on the bill as a victory, and that victory has further empowered resistance to it.

Protesters gathered at Republican senators' offices across the nation Wednesday, including at Sen. Marco Rubio's office in Florida and at Pennsylvania Sen. Pat Toomey's office in Washington, DC, where several of them were arrested, as Katy Tur reported on MSNBC:

TUR: Moments ago, arrests outside of Republican Senator Pat Toomey of Pennsylvania. You can look at that video right now, the woman being dragged out.

Protesters, including her, were shouting, "Toomey, please don't let me die!"

Toomey has been supportive of the Senate health care bill. You can see a sit-in is going on right now.

Protesters are also gathering outside of Washington. A small group is protesting today outside of Senator Marco Rubio's office in Doral, Florida, and that is where we find MSNBC's Mariana Atencio. Mariana, what are you hearing?

ATENCIO: So, Katy, the protests here just wrapped up. We spoke to many protesters out here who are seeing the delay as a victory for them of sorts.

They've been out here, many of them, for three consecutive days. I don't need to tell you how hot it is in Miami today, so it's a testament to how important it is for many of them to send a message to Senator Marco Rubio: vote no on this bill.

And one of them who we met out here is Dr. Sarah Stumbar. Sarah, you are a doctor in Florida, why is it so important for you to be out here today? What concerns you the most about this bill?

STUMBAR: I'm a primary care physician who sees patients in the northern parts of Miami. I'm really out here to speak for them. Most of them are uninsured, although many of them have managed to get coverage through the Affordable Care Act. For them, that coverage means access to insulin, mammograms, vaccines, pap smears – all of this preventative health care that means they will live longer, get diagnoses earlier, and I'm really concerned about this Senate health care bill that threatens to take all of that away from them.

ATENCIO: What do you think about the fact that this Senate vote was tabled this week?

STUMBAR: So, for me, that doesn't mean anything, right? The bill in the House was also tabled for a while. We all kind of forgot about it for a few weeks, and then, the next thing we know, it had been voted through.

For me, that was more mobilizing. It meant that I had to be out here so that we don't forget that this is happening behind closed doors, in secret, and that we really need to hold our legislators and our policy makers accountable.

The American Medical Association has come out strongly against the Republican repeal bill. The American Association for Retired Persons has also voiced its opposition to the bill, which puts 1.4 million Americans receiving Medicaid funded long-term care at risk.

The most recent polls show as little as 12 percent of Americans support the GOP plan.

Protesters at Sen. Cory Gardner's office in Colorado were subjected to attempts by his staff to drive them out by cranking up the heat Tuesday. Nevertheless, they persisted and have remained there for over 24 hours now:

Previously, disabled protesters in wheelchairs were dragged from the halls of Congress in front of Senate Majority Leader Mitch McConnell's office and injured while being removed by police from in front of GOP Senator Todd Young's office in Indiana.

With their lives at risk, Americans are continuing to put their bodies on the line to fight for health care. The Senate's delay of the vote has succeeded only in energizing them to continue to do so.