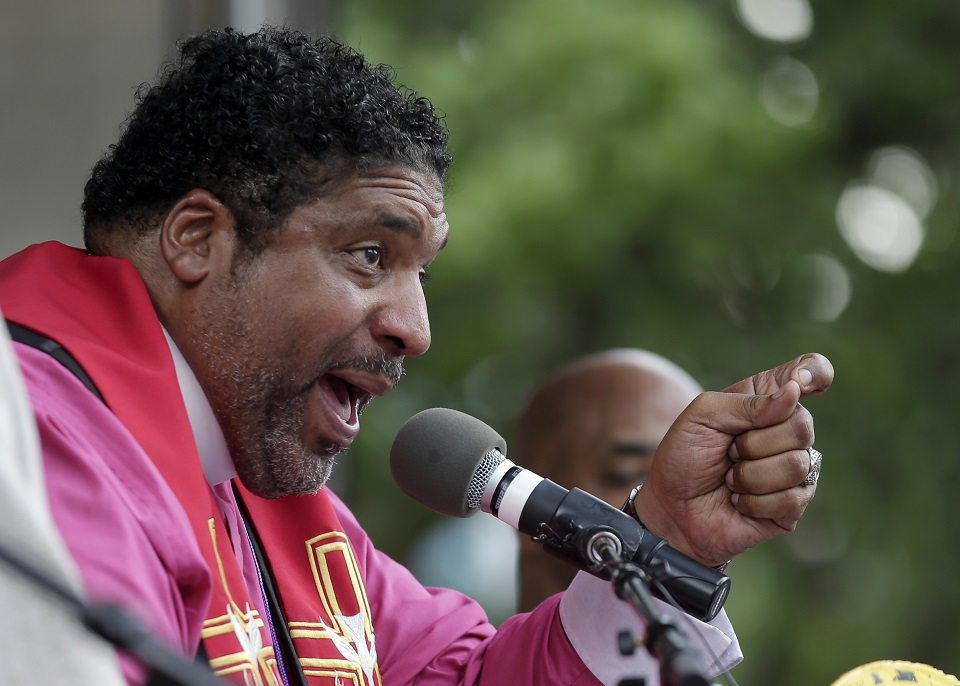 Perhaps in the ultimate show of desperation, Rep. Robert Marshall (R-KA) has turned to Jesus to try to justify Republican plans to take health care away from millions of people. Rev. William Barber is having none of it.

Obamacare is increasingly popular, and Republicans are increasingly desperate to conceal their plans to repeal it — most recently going so far as to hide draft legislation in a sealed room in the basement of the U.S. Capitol.

While at least one Republican on Capitol Hill, Senator Shelley Moore Capito (R-WV), is well enough in touch with her constituents to say that Medicaid expansion “better be” in Republican plans to replace Obamacare, another hit a new moral low in justifying GOP attempts to get rid of it.

In what NY Magazine's Jonathan Chait rightfully calls the "most morally repulsive argument for repealing Obamacare I've ever heard from a member of Congress," here's how freshman Congressman Robert Marshall of Kansas explained, in his view, Medicaid expansion is a bad thing:

“Just like Jesus said, ‘The poor will always be with us,’” he said. “There is a group of people that just don’t want health care and aren’t going to take care of themselves.”

Pressed on that point, Marshall shrugged.

“Just, like, homeless people. … I think just morally, spiritually, socially, [some people] just don’t want health care,” he said. “The Medicaid population, which is [on] a free credit card, as a group, do probably the least preventive medicine and taking care of themselves and eating healthy and exercising. And I’m not judging, I’m just saying socially that’s where they are. So there’s a group of people that even with unlimited access to health care are only going to use the emergency room when their arm is chopped off or when their pneumonia is so bad they get brought [into] the ER.”

REID: There is a congressman, Representative Robert Marshall of Kansas, who has said in terms of the Medicaid expansion, he said just like Jesus said, the poor will always be with us, a group of people who just don't want health care and aren't going to take care of themselves. Sir, as a pastor, I feel I have to ask you your take on his take on Jesus.

BARBER: Well, that is a form of heresy. It is a misquoting of Scripture. It is what the so-called religious evangelicals put out there. They actually misquote that Scripture. When Jesus was quoting that as a good Hebrew, and a good Jewish person. Whenever they quoted part of scripture, they meant the whole Scripture. If you go back to Deuteronomy, that Scripture says because the poor will be with you, then you should care for the poor. You should care for the alien. And it was talking to the nation. Jesus, if he did anything, provided free health care, Joy. Everywhere he went, he set up free health clinics.

REID: He sure did. And didn't charge a premium.

BARBER: And didn't charge a premium.

Just last month, the Kansas House of Representatives voted by a wide margin to expand Medicaid in that state. Two hundred thousand Kansans stand to gain health insurance if it goes through. It faces an uphill battle with Sam Brownback as Governor, but the moral lines have been drawn.