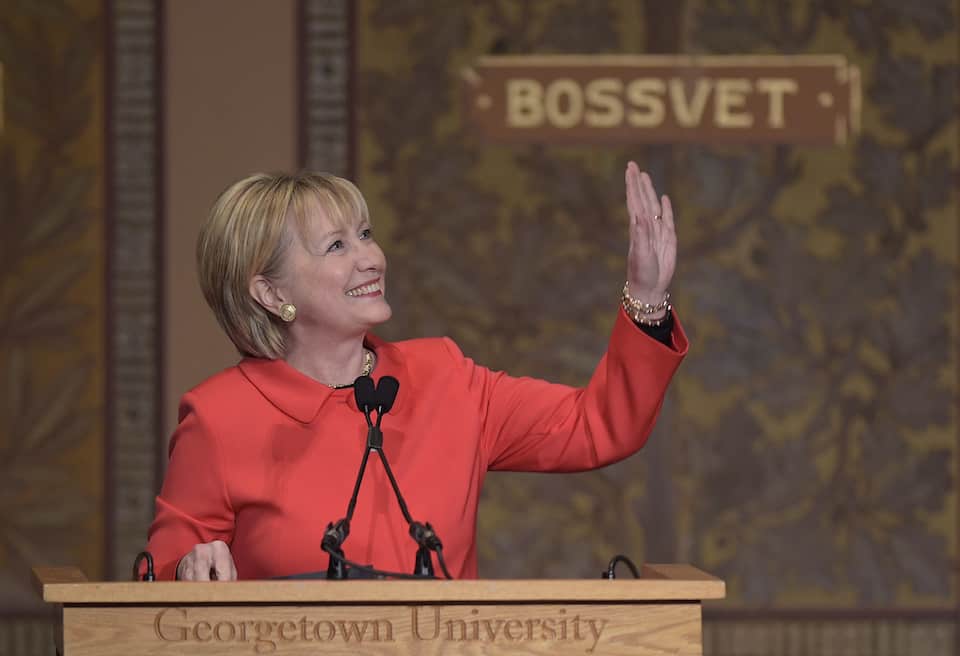 Hillary Clinton has devoted her life and energy toward the cause of equal rights and justice for women and girls around the world. In a wise and thoughtful address to Georgetown University, at a ceremony bestowing awards named in her honor, she showed that she is as dedicated to this cause today as she has ever been.

Nearly 22 years ago, Hillary Clinton offered the world a succinct and enduring idea of social justice, which continues to serve, in our new political reality, as a rallying cry for women and allies across the country and the around the world.

And Clinton herself is still as dedicated to that concept today, and to striving for its full and complete realization, as she was in Beijing in 1995, and in Philadelphia in 2016.

At Georgetown University's annual ceremony for the Hillary Rodham Clinton Awards for Advancing Women in Peace and Security, Clinton showed her heartfelt devotion to this work, through both her learned wisdom on the topic, domestically and globally, and her inspiring and admirable conviction that progress is still possible — even when it may seem unlikely.

She looked back over the years since her Beijing speech, and at the formation of the Georgetown Institute for Women, Peace, and Security, telling the audience that, "I believed then — and I have to tell you, I believe even more fiercely today — that advancing the rights and full participation of women and girls is the great unfinished business of the 21st century."

And she noted that, in addition to it being a moral necessity, it is also a strategic one, and not a partisan issue in the least, because "a rising tide of women's rights lifts entire nations." Which makes the moves by the current administration all the more troubling.

So, global progress depends on the progress of women. And I know we’ve seen positive results of that theme being actually implemented ever since the U.N. Women’s Conference in Beijing in 1995. But I’m here also to say we are seeing signals of a shift that should alarm us all. This administration’s proposed cuts to international health, development, and diplomacy would be a blow to women and children, and a grave mistake for our country. Some of you may have seen the recent letter from more than 120 retired generals and admirals to Congress and the administration, urging the Congress and the White House not to retreat from these programs which represent our values. These distinguished men and women, who served in uniform, recognize that turning our back on diplomacy won’t make our country safer — it will undermine our security and our standing in the world.

Building on that warning, Clinton referenced the studied, evidence-based case for involving women in the cause of peace and security, garnering boisterous applause when she noted with a grin, "Here I go again — talking about research, evidence, and facts" — facts such as that when women are included in peace negotiations, "agreements are less likely to fail and more likely to last."

She noted that, because women and girls are so often targets in conflicts around the world, by terrorist groups like ISIS and Boko Haram, and because women are therefore often the first to be aware of looming troubles, it is imperative that women's insight and experience be brought to the table for discussions about preventing, fighting, and healing from terrorism and other areas of global strife. And she offered a not-too-subtle dig at the current administration's preference for "alternative" facts and reality:

Now, before anybody jumps to any conclusions, I will state clearly: Women are not inherently more peaceful than men. That is a stereotype. That belongs in the alternative reality. (laughter and applause) But history does show that when women are at the peace table, they bring together coalitions and they work really hard to build consensus. And they are the ones most likely to shine a bright light on issues of human rights, transitional justice, national reconciliation, and economic renewal.

Clinton offered poignant accounts of women around the world, fighting against enormous obstacles and intimidating circumstances to bring about peace and justice for themselves and their communities: Northern Ireland, where women aided in forging peace across sectarian divides between their land and the United Kingdom; Liberia, where women blockaded a hotel where men were holding negotiations and would not allow anyone to leave until peace in their civil war had been achieved, and which brought about the election of Ellen Johnson Sirleaf as the new Liberian president, the first woman president on the entire continent of Africa; Democratic Republic of Congo, where women have survived "the most horrific, almost unimaginable abuse and cruelty, and then summon the resilience to rebuild and help others go on"; and Colombia, where decades of violence were brought to a close by the steadfast and relentless activism by women around that nation.

These powerful stories underscore the need to take women's experiences and wisdom seriously, and to view their rights and equality as deserving of far more than "lip service." Women and girls inhabit such a different, and often far more dangerous, place in conflict zones, that it is simply not possible, nor prudent in any sense, to shut them out of the larger conversation about how these conflicts arise, what will happen once they do, and how people can prevent them in the future.

Living as a woman far too often means living at risk — especially when those who purport to end that risk do not think to seek the input from those most affected, and when "there will be forces at work...from all sides to undermine" the work and to either prevent peace from becoming a reality, or to ignore the imperative to support it.

Including, perhaps, our own government.

I am pleading that our government will continue its leadership role on behalf of peace in the world. Because the world must continue this work, with or without U.S. involvement. (applause) And the choice is ours to make: In this complicated, interconnected, interdependent world of ours, it's not as though you can pick one or two, three things that you say 'Well, that's all I'm going to work on.' Events move too quickly. Borders dissolve in the face of pressures. The great connectivity of the internet can spawn both opportunity and despair. So, we have to ask — will we be left behind, or will we continue to lead the way? I hope the answer is that we will do whatever it takes to make our country and the world stronger and more secure — standing up for our values, for human rights and opportunites, security for all, and continuing to finish the business of making sure that girls and women have the same rights as men and boys, and by extending and guaranteeing those right unleashing human potential the likes of which the world has never seen.