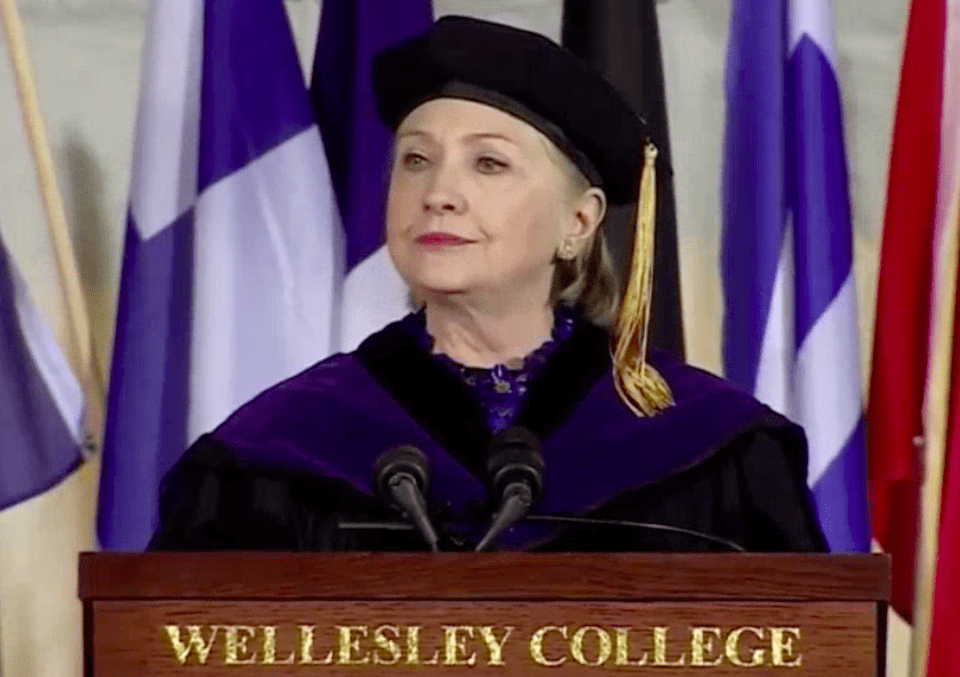 Speaking as the keynote at Wellesley College's graduation ceremony, Hillary Clinton directly compared the behavior of Donald Trump to Richard Nixon's obstruction of justice, that led to Nixon's impeachment and resignation in disgrace.

Hillary Clinton explicitly compared the actions of Donald Trump to Richard Nixon, in a commencement ceremony speech to graduates at her alma mater, Wellesley College.

Clinton connected the feelings many of the graduates were surely grappling with today to her own commencement experience in 1969.

She noted the similar concerns about social justice between her own graduating class and today's, both groups having been focused on "urgent questions about whether women, people of color, religious minorities, immigrants would ever be treated with dignity and respect."

And she pointedly reminded the audience that she and her classmates had been "furious" about the election of  Nixon, who had fired "the person running the investigation into him at the Department of Justice," and how his tenure eventually ended in "disgrace with his impeachment for obstruction of justice."

CLINTON:  Now if any of you are nervous about what you’ll be walking into when you leave the campus – I know that feeling.

I do remember my commencement like it was yesterday. I had been asked by my classmates to speak, I stayed up all night with my friends on the third floor of Davis, writing and editing the speech. By the time we gathered in the Academic Quad, I was exhausted, my hair was a wreck, and the mortarboard made it even worse. But I was pretty oblivious to all of that because what my friends had asked me to do was to talk about our worries, and about our ability and responsibility to do something about them.

We didn’t trust government, authority figures – or really anyone over 30, in large part thanks to years of heavy casualties in and dishonest official statements about Vietnam, and deep differences over civil rights and poverty here at home.

We were asking urgent questions about whether women, people of color, religious minorities, immigrants would ever be treated with dignity and respect.

And by the way, we were furious about the past presidential election of a man whose presidency would eventually end in disgrace with his impeachment for obstruction of justice [cheers and applause] after firing the person running the investigation into him at the Department of Justice.

Trump has been accused of obstruction of justice after firing FBI director James Comey while the agency was conducting an investigation into the Trump campaign's relationship with Russia and that country's attempt to influence the presidential election.

And while the current political reality is certainly unprecedented in many ways, it is important — and eerie — to remember, as Clinton reminded the Wellesley graduates as well as the rest of us, that we have seen similar times as a country.

Past is prologue, perhaps in more ways than we currently know.