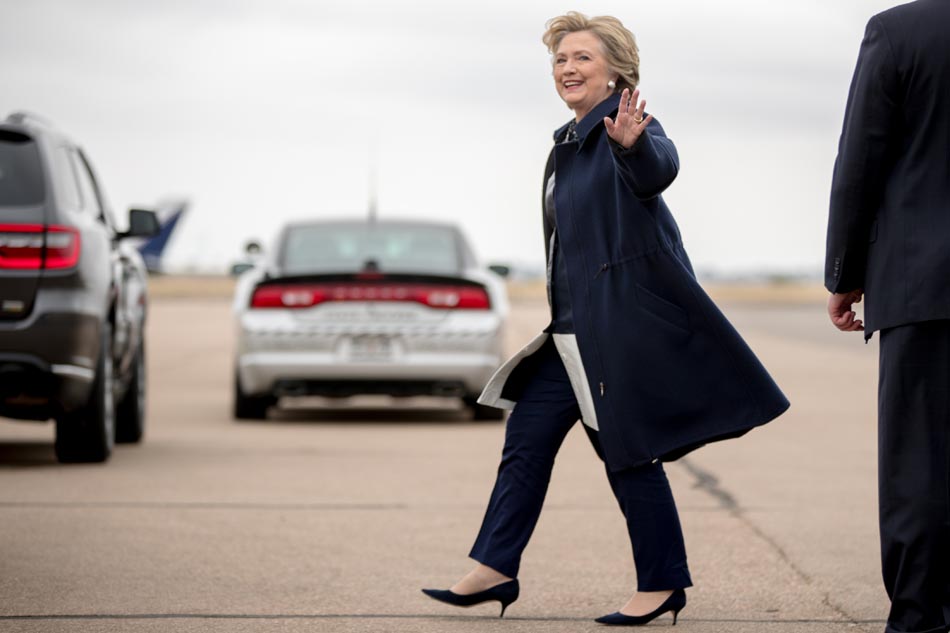 The Wachowskis' Matrix films are among my favorite of all time, serving as a brilliant metaphor for waking up to — and fighting back against — systems of injustice.

It is not a superhero at the center of the Matrix films, but Keanu Reeves' Neo — a human with extraordinary gifts; a reluctant leader; a person whose willingness to try despite long odds inspires profound loyalty from the people who fight at his side.

That description reminds me, in many ways, of Hillary Clinton.

Which is why, in this moment when we most need a leader who is prepared and capable for a relentless battle, she has emerged ready to take on the challenge. In this particular moment, she stands before us, the most qualified candidate ever, ready to lead the charge.

Donald Trump and his endless brigade of surrogates and smear merchants have tried coming after her from every possible angle. Trump, Mike Pence, Rudy Giuliani, Chris Christie, Newt Gingrich, David Bossie, Roger Stone, Stephen Bannon — Republican and conservative operatives who have tried to take her down for 30 years.

And they have all failed.

Every time I see one of them coming at her with another fallacious attack, all I can think of is the Burly Brawl.

Just a seemingly infinite stream of Agent Smiths — indistinguishable from one another; identical in both visage and mission; single-mindedly bent on destruction — coming at Neo from all directions.

Trying every conceivable fight strategy, from every possible angle, they throw themselves at him and are rebuffed, flung to one side or up into the air like so many insubstantial pests.

"More" are called, and more are batted away. They pile on top of Neo, and he rises, his strength hurling them like ragdolls.

When I see Giuliani sputtering incoherently during an interview, or watch Paul Ryan awkwardly try to straddle supporting Trump and distancing himself from him, or imagine how deeply Ted Cruz must regret finally endorsing Trump mere days before the Billy Bush tape surfaced, I cannot help but picture a pile of toppled Agent Smiths, lying in the dust, defeated.

Unlike the infinitely replicating Agent Smiths, though, Trump's surrogates won't be able to spontaneously regenerate their reputations, for whatever they were worth in the first place.

The mistake they make — the mistake Clinton's opponents have always made — is buying into their own dishonest narratives about who she is. She is not "Crooked Hillary." She is not the conniving, sinister, Machiavellian scoundrel they have cast her to be.

She is instead a person of decency and integrity, and every effort to derail her on a basis that presumes otherwise crashes headlong into that reality.

They also continually underestimate why she fights. It is not because of voracious ambition and an insatiable ego, the sorts of motives that make lesser people crumble under the pressure of a tough and extended fight. It is because she believes, quite literally, that we are stronger together.

Knowing that one is fighting for others evinces a stamina the likes of which Trump and his pals have never known.

In the Matrix trilogy, Neo is not just fighting for his own survival. He is fighting for Zion, a city filled with people who may not have his inimitable talents but ever have his back.

The Agent Smiths aren't fighting for anyone or anything besides more power, continued control. Their fight is against Neo, a symbol of the erosion of their authority. An authority they did not earn, but took by force.

They focus on him, to the exclusion of everyone else who provides him aid and comfort; everyone who refuels the fire in his belly when he needs it. He is never alone, though they fight him like he is.

That, too, rings familiar to me.

Millions of us are ready to remind them on Election Day that Neo may have fought single attacks by himself, but he never fought the battle alone — and neither does Hillary Clinton.