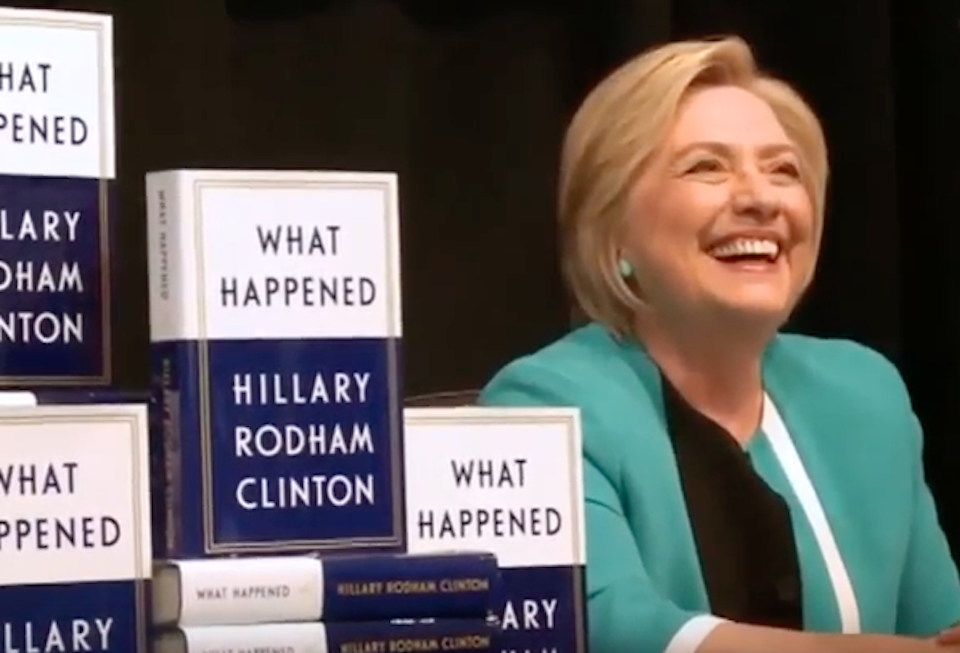 Trump loves to brag about how many copies his books sell, but Hillary Clinton just surpassed his last title in one week, and now she has her sights set on "The Art of the Deal."

Hillary Clinton’s new book is shaping up to be publishing blockbuster, with news that the recently released “What Happened” sold more than 300,00 copies its first week in stores.

That’s the best first-week sales performance in five years for any non-fiction hardcover book, according to NPD BookScan, which tabulates the publishing data.

The book also set a Simon & Schuster company record for weekly digital audio sales, according to the Associated Press. “What Happened” sold more e-book editions in a single week than any nonfiction release from the publisher since Walter Isaacson’s biography of Steve Jobs in 2011.

How big of a hit is “What Happened”? Its first-week sales tally of 300,000 copies surpasses the total of number of copies sold for Donald Trump’s 2015 release, “Crippled America,” which has sold 247,000 copies.

“Crippled in America” was released to promote Trump’s presidential campaign. The slim, 193-page hardcover book provided an outline for Trump’s platform and included insights into how Mexico was going to pay for the border wall that Trump wants to build between the U.S. and Mexico. “One way or another," he wrote, "they are going to pay for it.”

He also used the book to bash the press: “They are horrible beings, they are dishonest. I’ve seen these co-called journalists flat-out lie. I say that because incompetence doesn’t begin to explain the inaccurate stories they have written.”

Meanwhile, “What Happened” is on track to sell more copies in two or three weeks than Trump’s signature book release, “The Art of the Deal,” has sold over the last 16 years. Originally released in 1986, the book became a New York Times bestseller and reportedly sold more than one million copies. Trump has erroneously bragged that the book is the best-selling business book ever published. (It’s not.)

Since 2001, when book sales began to be tabulated via BookScan, “The Art of the Deal” has sold just under 500,000 copies. A large chunk of those sales came during the last two years as Trump rose to political prominence.

But Clinton’s “What Happened” will likely surpass that 500,000 figure in just a couple weeks in the stores.

In the 2016 election, Clinton received nearly 3 million more votes than Trump. It looks like she's got a lot more readers too.