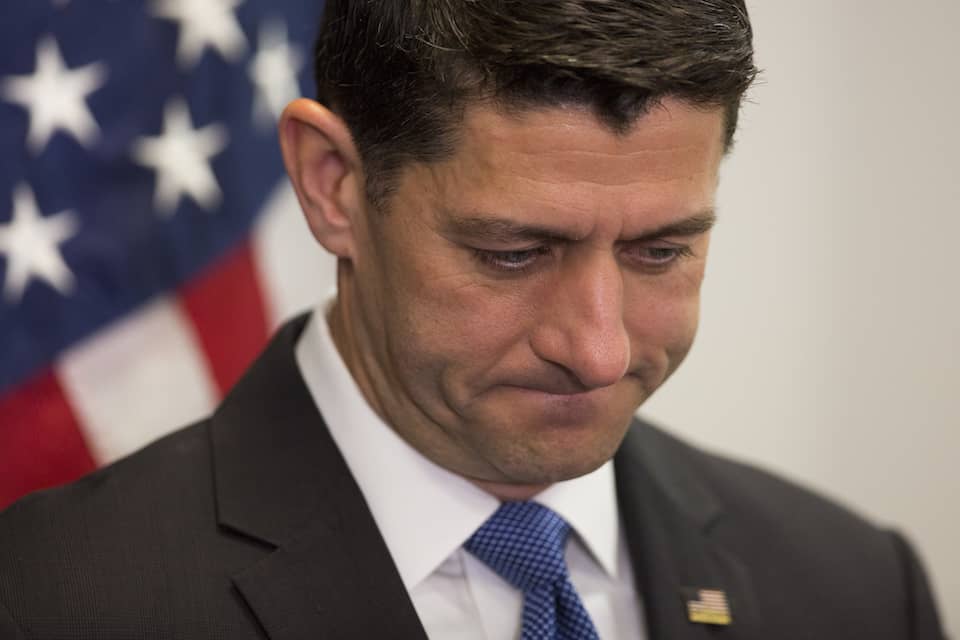 House Republicans narrowly passed their bill to repeal Obamacare and replace it with an alternative Americans despise, which could kick 24 million people off insurance, bring back limitations on coverage of pre-existing conditions, and send premiums skyrocketing. But it also spells huge trouble for the GOP.

By a strictly partisan vote of 217-213, House Republicans passed their second attempt to repeal Obamacare since Donald Trump became president.

The bill, which Speaker Paul Ryan rushed through without even waiting for the Congressional Budget Office to score it to calculate how much it will cost, is a disaster for the American people, especially those who live in red states that gave Trump his electoral victory.

As of Tuesday night, members of Congress had not even read the bill. Only hours before the vote, Virginia Republican Rep. Thomas Garrett scoffed at the idea of reading the bill, saying, "I don’t think any individual has read the whole bill, but that’s why we have staff."

As Minority Leader Nancy Pelosi said on the House floor, "If Republicans really thought they were protecting people, they wouldn't be afraid of the facts." She added, quite rightly, "Those that vote for this will have it tattooed on their forehead. You will glow in the dark."

Several other Democrats rose in powerful opposition to the bill. Michigan Rep. John Conyers said quite simply, "If we pass this bill, people will die."

Rep. Sheila Jackson Lee of Texas also gave a fiery speech, calling the bill "the Mother of All Bombs on health care."

The bill now moves on to the Senate, where it faces obstacles, not only from Democrats, but also from Republicans who are openly expressing their concern about passing a messy, rushed, and deeply unpopular bill.

A bill -- finalized yesterday, has not been scored, amendments not allowed, and 3 hours final debate -- should be viewed with caution.

Only days ago, Senate Majority Leader Mitch McConnell of Kentucky — whose state has been one of the greatest beneficiaries of Obamacare because of expanded Medicaid — also signaled significant problems for the bill. In response to Trump's twitter tantrum demanding Republicans end the legislative filibuster or shut down the government, McConnell said he had no intention of doing so.

That means the bill would need 60 votes in the Senate — every Republican, plus eight cross-overs — to land on Trump's desk. And that, as West Virginia's Democratic Sen. Joe Manchin said, is not going to happen.

There is the possibility that Senate Republicans could pass the bill with a simple majority, through a process known as reconciliation. However, given the number of Republicans concerned about this bill, there is no guarantee they would be willing to take such action.

Despite the Republican rhetoric of the last seven years, GOP leadership knows repealing Obamacare could mean disaster for them in 2018. As President Barack Obama recently noted, Obamacare is more popular than Trump. Tying themselves to the unpopular president and his unpopular agenda could be a huge problem for vulnerable Republicans in 2018.

It is too late for Republicans to save themselves at this point. Whether the bill ultimately becomes law, every Republican who voted for the bill is going to face incredible obstacles — not to mention devastating ads — when they go back to their districts and try to justify their vote to constituents who have made it clear they want to keep Obamacare.