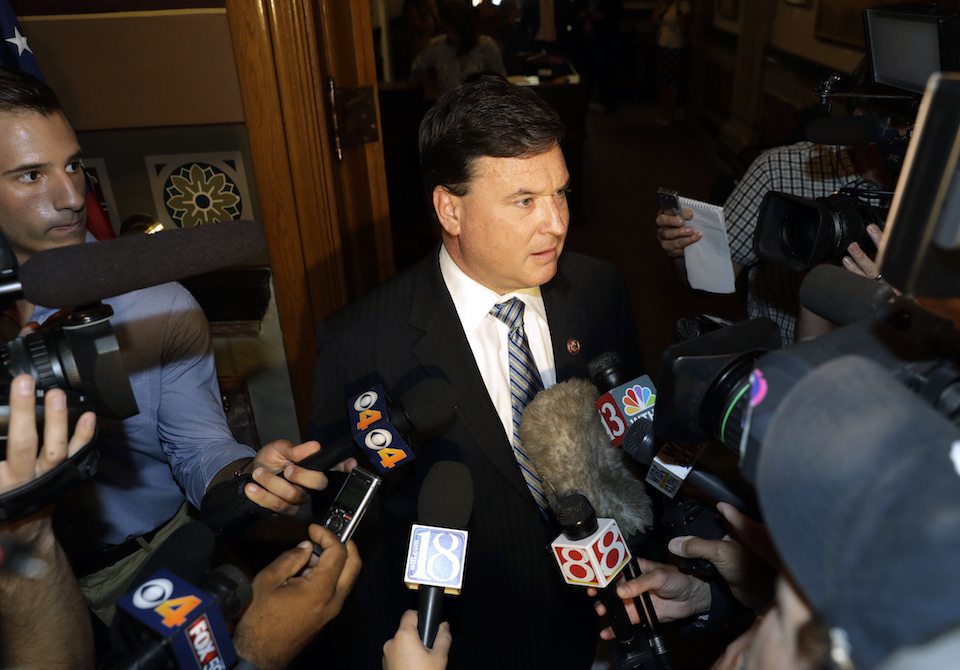 Senate Republicans invited two GOP elected officials who sought to overturn the 2020 election to testify at an upcoming hearing about the need to expand voting rights.

Indiana Attorney General Todd Rokita and West Virginia Secretary of State Mac Warner will both testify on Wednesday at a hearing on S. 1 — a major voting rights bill that would expand access to the ballot box.

S. 1 is the Senate's version of H.R. 1 — known as the "For the People Act" — which if signed into law would require states to implement automatic voter registration, allow anyone who wanted an absentee ballot to obtain one, block states from implementing overly strict voter ID laws for absentee voting, curtail voter roll purges, and create nationwide same-day voter registration, among other things.

Republicans are vehemently against both H.R. 1 and S. 1, and they invited Rokita and Warner to testify against it at the hearing to examine the legislation.

But neither Rokita nor Warner are voting rights advocates. In fact, both Rokita and Warner supported Texas' failed lawsuit that sought to overturn President Joe Biden's 2020 victory.

The Texas lawsuit sought to throw out millions of votes in Pennsylvania, Georgia, Michigan, and Wisconsin — all of which Biden won — and force those states to hold entirely new elections. The lawsuit was based on Republican lies that those contests were marred by fraud, allegations that had already been thrown out by dozens of judges at both the state and local level for lack of evidence.

Legal experts called the Texas lawsuit — which ultimately failed when the Supreme Court refused to hear it — "crazy" and a "stunt." Yet Rokita and Warner both supported Texas' effort.

Warner told a local West Virginia media that he supported the lawsuit, citing "irregularities" in the vote, even though courts had already knocked down that argument. Warner also appeared at a "March for Trump" event in West Virginia after the election in December, in which Warner held up a sign that said, "Stop the Steal." That "Stop the Steal" messaging was part of the Trump-fueled disinformation campaign about the election results that helped lead to the deadly insurrection at the Capitol on Jan. 6.

Rokita, meanwhile, said he supported the Texas effort to invalidate other states' election results because "Millions of citizens in Indiana have deep concerns regarding the conduct of the 2020 Presidential election."

"Deeply rooted in these concerns is the fact that some states appear to have conducted their elections with a disregard to the U.S. Constitution," Rokita said at the time, again an argument that courts had already tossed out as they ruled against Trump and his GOP allies' lawsuits seeking to invalidate the results.

S. 1 is unlikely to pass, as Republicans are banding together to filibuster it.

Republicans are afraid of the legislation becoming law, as it would block the GOP effort in states across the country from making it harder to vote.

Currently, GOP state lawmakers across the country are attempting to pass hundreds of voter suppression laws in the wake of Donald Trump's 2020 loss.

And the Associated Press reported that last week, Sen. Ted Cruz (R-TX) told a group of GOP state lawmakers that the voter suppression effort is key to Republicans being able to win again in the future, and appeared to say that is the "For the People Act" passes, Republicans couldn't win an election again.

"H.R. 1's only objective is to ensure that Democrats can never again lose another election, that they will win and maintain control of the House of Representatives and the Senate and of the state legislatures for the next century," Cruz told the GOP state lawmakers in a call, according to the AP.

Other Republicans, however, have called out the Republican effort to suppress the vote, saying that Republicans should be offering reasons why voters should vote for GOP candidates, rather than trying to make it harder to vote.

Meanwhile, the Republican effort to block the "For the People Act" is leading to calls from Democrats and voting rights advocates to end the filibuster. The filibuster requires that legislation must receive the support of 60 senators in order to advance to a vote. And given that it's rare for either party to hold 60 seats, it allows the minority party to block legislation.

"We have to pass voting rights no matter what, and it's a contradiction to insist on minority rights in the Senate while refusing to stand up for minority rights in the society," Sen. Raphael Warnock (D-GA) said Sunday on NBC's "Meet the Press," referring to some of his Democratic colleagues who do not support nixing the filibuster.

"I'm going to do everything in my power to convince my colleagues to support voting rights," Warnock added.