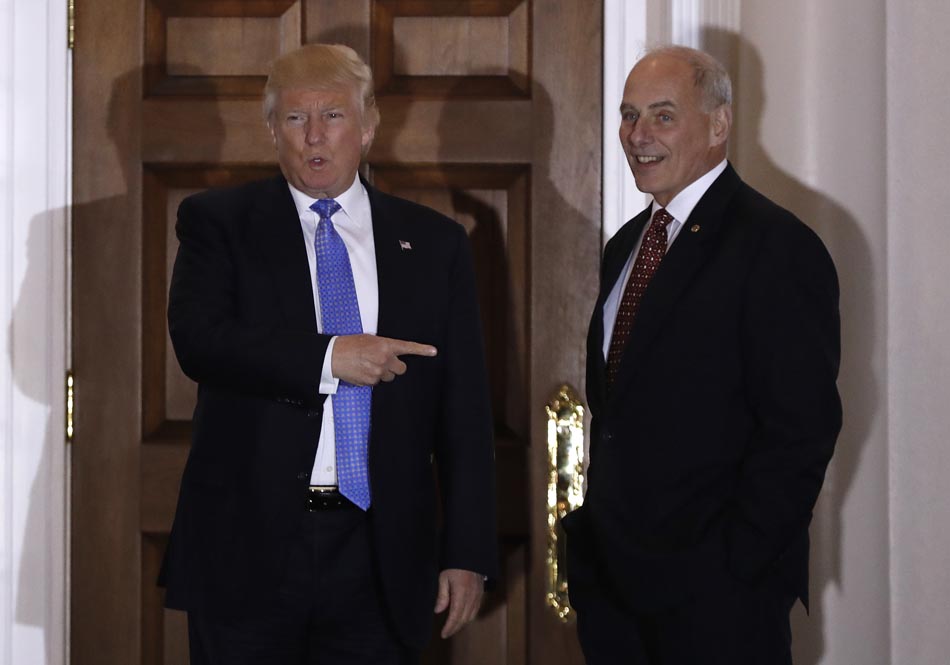 President-elect Donald Trump has nominated retired General John Kelly to lead the Department of Homeland Security — meaning that a military commander who scoffed at the human rights concerns raised over the prison at Guantanamo Bay will be in charge of our nation's already vulnerable immigration detainees.

Now the pick is official.

Although Kelly had a respected military career, he will be assuming control over a raft of civilian federal agencies that are, in large part, already at risk of over-militarization. Any general in this sort of position would be concerning, especially one who just retired in January and has no relevant civilian leadership experience.

There are grave concerns specifically regarding Kelly's attitude toward human rights abuses. Particularly attracting attention is his reaction to the idea that the United States' treatment of detainees has decreased our moral standing:

The rationale that we should use ISIS as a human rights yardstick is frighteningly familiar, but Kelly was also dismissive of the idea that Guantanamo detainees were mistreated at all:

'Human rights groups on the one hand will criticize the U.S. government for enteral feeding,' he said. 'But in private, they’ll tell me ‘Thank goodness you’re doing this. These people might hurt themselves.’ I am charged by the president, we are charged by the president – the U.S. government – to maintain their health to the degree that we can. They have, frankly, better healthcare down there than probably the veterans in our country have, and they certainly have as good of health care down there as anyone in the U.S. military does.'

Given the volume of human rights abuses that have been alleged at Guantanamo, Kelly's attitude is troubling.

As is this section of his 2014 address to the Human Rights First Summit, in which he appears to empathize with those who commit atrocities, and seems to view the prospect of getting caught as the main reason to investigate violations:

From the U.S. military point of view, there have been, unquestionably, there have been abuses within the U.S. military. My Lai for my generation, the Vietnam generation coming up, My Lai is an obvious one. Haditha Dam, for us that wear the Marine uniform, many many, a number of others, from this war. But at the end of the day, as I tell the — and it's resonated with the leadership in some of these, all of these countries that I deal with — at the end of the day, and I will end with this, at the end of the day it's not that an event happened. Whether it's My Lai or Haditha Dam, it's not that the event happened.

If you've never been to combat, and I don't mean been in uniform and been in Iraq, I mean really been in combat, it's impossible to understand what you go through, what the young men and the young women go through. It's impossible, and it wears you down over time. There's no excuse for violating human rights to do these atrocities, there is never an excuse to violate human rights and to do atrocities. But, and again there's no excuse, but there is an explanation, but you can't even understand the explanation and unless you've really been in combat.

But in any event, we don't have, we have a zero tolerance, but we don't have a perfect record. But as I tell the leadership, it is what you do when you suspect it, or when you have a case. You have to, institutionally, you have to look into it. You can't turn a blind eye to it.

As much as you don't want to go after your soldiers, your Marines, and prosecute them, you have to do it. You cannot cover it up, and in fact it's almost impossible to cover up things these days anyways. And at the end of the day, a court of law or a court-martial will certainly give the individual that's accused his or her day in court, so to speak.

But as I point out to them again and again and again, it's not the fact that you have a violation, or that you have a soldier that got out of hand, or a cop that did something wrong. It's how the institution responds to it. If you cover it up — if you investigate it and really hold people accountable, then people will give you credit for that. If you don't investigate, if you do try to cover it up, you will eventually get caught, and then you're — no one will, it just takes away from the credibility of your organization.

This was during a speech in front of a human rights organization. Immediately afterward, Kelly told the Washington Post that detainees at Guantanamo are being treated well. The gulf between Kelly's words and deeds is concerning across every aspect of the sprawling Homeland Security bureaucracy, but particularly with regard to our immigration detention system.

According to the latest figures, the United States detains over 400,000 people per year in 209 immigration detention facilities, most of which are operated by private (and for-profit) companies. Those detainees are vulnerable to sexual assault by agents, contractors, and other detainees, with little to protect them:

Transgender women are particularly targeted for abuse at the southern border: They are often housed with men, placing them at increased risk for sexual assault. Cis women and all children are also targeted, by border guards and staff at detention centers. Further, undocumented migrants who are assaulted are routinely denied access to abortion and emergency contraception.

Under Trump's immigration plan, those figures will likely increase. And his nomination of Kelly displays dangerous indifference to the conditions under which immigrants will be detained.

When Kelly's confirmation comes before the Senate, Democrats should uphold the principle of civilian control over our government. But first and foremost, they should carefully examine Kelly's record and rhetoric on human rights abuses.