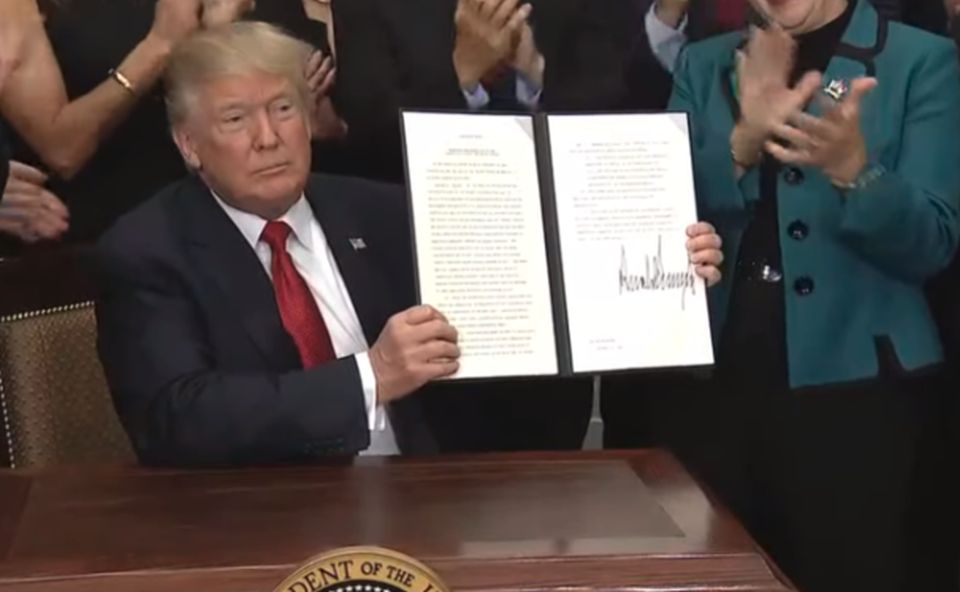 Frustrated and humiliated by his failure to get anything done, Trump is taking it out on Americans by trying to destroy Obamacare with one order.

Donald Trump vowed to repeal Obamacare on day one, if not sooner.

Instead, his attempts to do anything with health care have failed — not once, not twice, but three times. So instead of working to make health care better, Trump is working to destroy the health care law that has made life better for millions of Americans.

And because he cannot even get his own party to help him, he's doing it with a despotic executive order.

Trump staged a ridiculous signing ceremony for his order, surrounding himself with members of Congress and others as if he were signing a bill. Except that he isn't. He could not get Congress to pass his bill, so, as he has done before, he is simply pretending that he did accomplish something.

In fact, Trump seemed far more focused on the applause he received from the small crowd of supporters in the room than the order itself. He shook hands and smiled and was about to leave the room until Vice President Mike Pence tapped him and said, "Mr. President? Mr. President, you need to sign it." Trump absurdly claimed his new order will increase health care options for more Americans without costing the government anything. But every assessment of every action Trump has taken, and every bill his party has attempted, has shown the cost of health care skyrocketing.

Despite Trump's blatant lies during his "signing ceremony" for his executive order, this will do nothing to expand access to affordable health care. Instead, it's another attempt by Trump to sabotage health care, drive up prices, and jealously attack President Barack Obama's legacy of giving millions of Americans health care who would not otherwise have it.

"This executive order is the latest tactic in the GOP’s ongoing effort to impose an unpopular and harmful health care agenda on Americans," Democratic Senatorial Campaign Committee spokesman David Bergstein noted in a statement.

"This order, coupled with the GOP’s ongoing sabotage of the health insurance system, will have an expensive and tangible impact on voters, and they will hold every Republican Senate candidate accountable in 2018."

The Republican agenda to repeal Obamacare is deeply unpopular — and becomes even more unpopular with every new effort.

Less than a year into his presidency, Trump is a total failure. He has embarrassed America on the global stage. He has shown a shocking lack of empathy for Americans struggling in the wake of natural disasters. He has picked petty fights with his fellow Republicans, with the NFL, with the mayor of San Juan. He has attacked vulnerable Americans and praised rioting Nazis and white supremacists as "very fine people.:

Instead of doing his job, he is taking out his frustration on the American people by trying to destroy everything he can, however he can. Trump lost the popular vote last year by nearly 3 million votes, and since taking office, he seems determined to drive the rest of the country away as well.