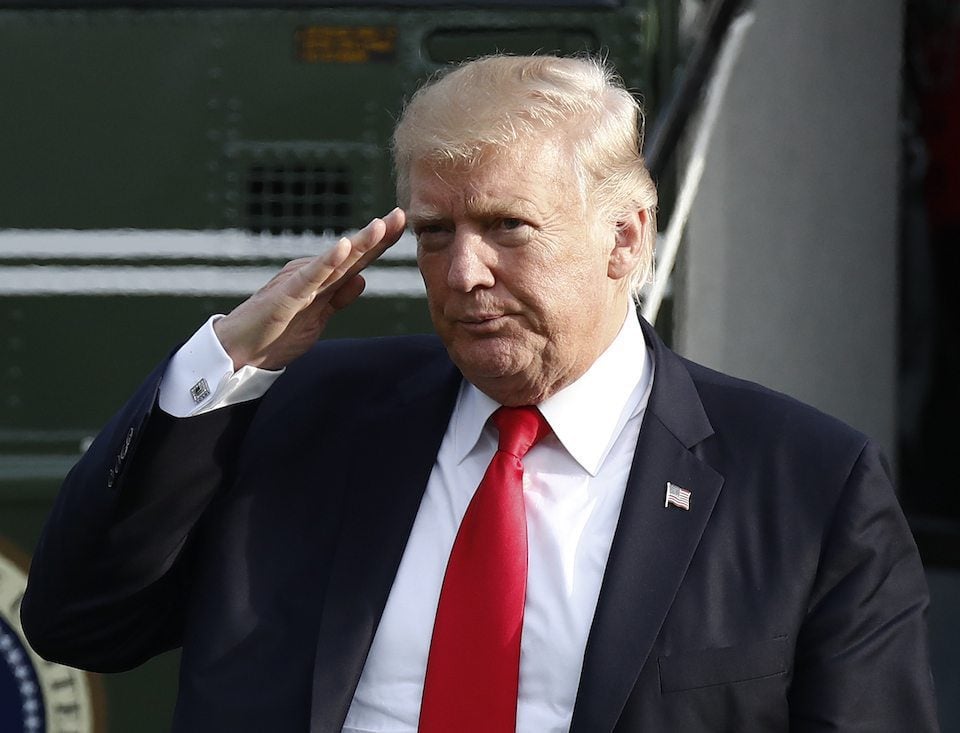 "It comes as no surprise that President Trump would disrespect time-honored military traditions."

U.S. veterans are speaking out and criticizing Donald Trump following the televised spectacle Wednesday night when he failed to stand or honor the American flag as a bugler played, signaling the "Retreat" ceremony at a Pennsylvania military base.

Instead of taking part of the solemn and silent military event, Trump laughed with Fox News’ Sean Hannity during “Retreat” and joked that maybe the “nice sound” of the music was in honor of the host’s TV ratings.

Trump’s glaring blunder comes as he picks a fight with the NFL and tries to spark a divisive national argument about patriotism and “honoring” the flag as well as our troops. Indeed, Trump now constantly tries to frame the kneeling protests as an attack on service members, despite the fact that the players are actually protesting police brutality, and their cause expresses no animosity toward the military or the American flag.

Some U.S. veterans have had enough, including Rep. Ted Lieu (D-CA), a former active duty officer in the U.S. Air Force.

“It comes as no surprise that President Trump would disrespect time-honored military traditions,” Lieu tells Shareblue Media, regarding the “Retreat” fiasco. "He avoided serving in Vietnam, has been critical of prisoners of war, and has publicly undermined the expertise of top military officials."

Trump, who sat out the Vietnam War with a sore foot, never served in the U.S. military.

"He calls on athletes to stop exercising their Constitutional rights under the guise of being respectful to our military and then fails to actually honor our service members," Lieu adds.

“If he spent a day of his life in uniform he'd know better, but standing for the flag is pretty tough when you're fighting bone spurs,” said Brendan McKinnon, member of the Truman National Security Project's Defense Council and U.S. Coast Guard veteran.

“In today's America, it is apparent that silent protest in the presence of the flag is wrong, but acting like a fool is fine,” adds Terron Sims, a fellow with Truman National Security Project and U.S. Army veteran.

As the official Army website notes, playing “Retreat” is “one of the oldest traditions in the U.S. Army, which dates back to the Revolutionary War.” Playing the song is used “to signal the end of the duty day and pay respect to the nation’s flag.”

The “Retreat” blunder was just the latest example of Trump clumsily trying to use the U.S. military for his own political gain, while regularly disrespecting service members.

For instance, it’s been nine days since ISIS gunmen killed four American soldiers during an ambush in Niger. But Trump still has not acknowledged the killed-in-action deaths, or offered up any public condolences to the families of the slain.