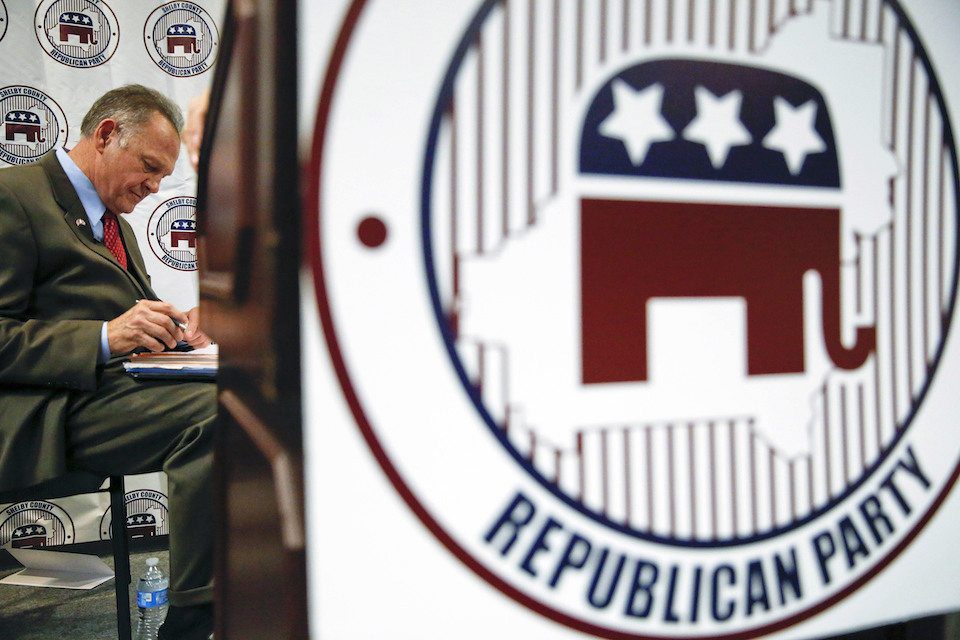 There is nothing so heinous that it would stop Alabama Republicans from voting for a fellow Republican.

On Thursday, the Washington Post released a bombshell story alleging that Alabama Senate candidate and twice-fired state judge Roy Moore had preyed on four teenage girls in the late 1970s and 1980s, sexually molesting one of them.

Moore frantically tried to have Breitbart scoop the story in a last-ditch attempt to control the narrative, but already several Republican senators have called for him to drop out of the race.

Among Republicans in Alabama, however, it is a different story.

Numerous state and local officials have come to Moore’s defense against the accusations of pedophilia — each of their arguments more ridiculous than the last.

Alabama Secretary of State John Merrill said, “I know Judge Moore to be a man of character and integrity and I find it very shocking that this information is being introduced at this time in his career ... People make things up all the time. Do I think it’s possible they made this up? I do.”

At this point, Merrill cannot legally remove Moore from the ballot even if he were so inclined. But his insinuation that these allegations are “made up” is divorced from reality. The Washington Post story is based on interviews with over 30 people who knew Moore.

Said Bibb County Republican Chairman Jerry Pow: “I would vote for Judge Moore because I wouldn’t want to vote for [Democratic candidate] Doug [Jones]. I’m not saying I support what he did.”

Apparently, “Democrat” ranks even lower than “child molester” with Alabama politicians — even a Democrat like Jones, who oversaw the prosecution of another heinous crime against children.

Marion County GOP chairman David Hall had a similar take on the allegations of Leigh Corfman, the youngest of the women to come forward. “It was 40 years ago. I really don’t see the relevance of it. He was 32. She was supposedly 14. She’s not saying that anything happened other than they kissed.”

When reminded by Toronto Star reporter Daniel Dale that Moore also tried to get Corfman to touch his genitals, Hall reiterated that it was “40 years ago” and “It won’t affect whether or not I’d vote for him.”

State Rep. Ed Henry, who co-chaired the Trump campaign in Alabama, said the accusers had “probably been offered money by entities that surround the Clintons and that side of the world.”

But perhaps the most preposterous defense of Moore came from Alabama state auditor Jim Zeigler. “Take Joseph and Mary," he said. "Mary was a teenager and Joseph was an adult carpenter. They became parents of Jesus.”

Apparently, Zeigler forgot about the most important part of that particular Bible story.

There are apparently no depths to which Alabama Republicans will refuse to sink if it means maintaining one-party control over their state. Even voting for a pedophile becomes reasonable in service of that goal.