Home National I have health coverage for the first time in four years thanks...
Support progressive journalism.
Donate today 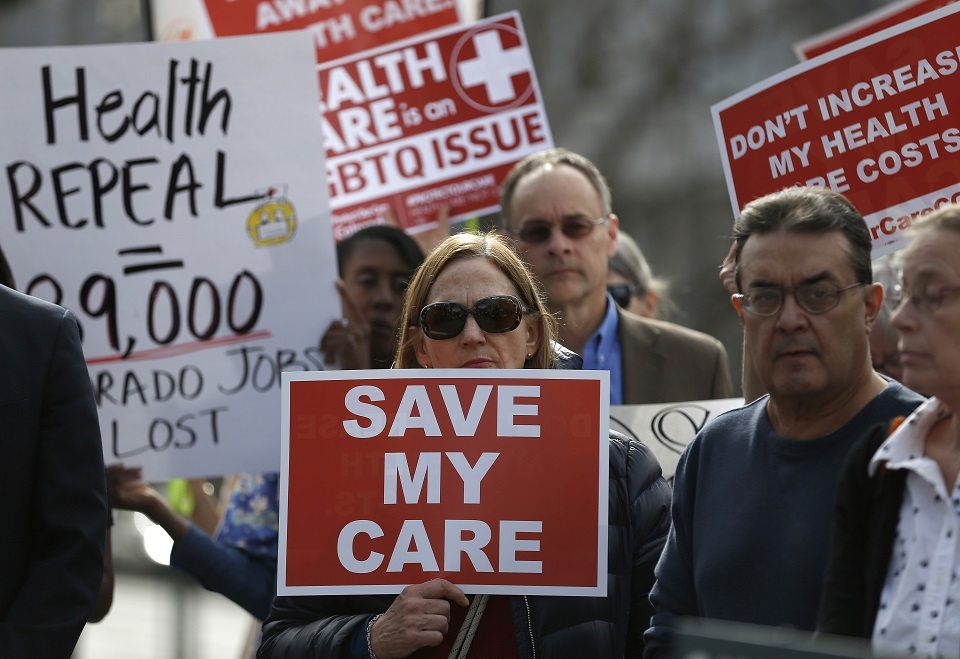 The people who need help with food, shelter, and health care are not some mythical "other" out there. They are us.

As of March 1st, I have health coverage for the first time in four years, thanks to the Affordable Care Act, aka Obamacare.

I am 52 years old. I started working when I was 16 and have been self-supporting for almost my entire adult life. Yet, during a temporary period of hardship, I lived in states that did not participate in Medicaid expansion and, while my daughter was covered, I was not. Because of our level of impoverishment, I could not afford the premiums — even with the supplemental support — under the Affordable Care Act. My choice was not between paying for a "new iPhone" and health coverage. My choice was literally between housing and feeding my daughter and buying health coverage for myself.

Just as it was a lie that poor people and millennials buy fancy phones instead of health coverage, there is a simple but huge lie used by Republicans to try to dismantle and eliminate ALL government programs that help low-income Americans: The poor are lazy and undeserving. The GOP would have you believe that there is some massive population of people who do not have money because they simply do not want to work. Conservatives call programs like the Supplemental Nutrition Assistance Program (SNAP or "food stamps") "entitlements" because they want you to imagine a bunch of slothful adults who do not contribute to society and feel "entitled" to being supported by the government.

This lie is pervasive and has been repeated for decades. Even those of us who know it is not true have internalized it to some degree. It is a shaming lie, and purposefully so because it is meant to discourage people from seeking assistance when they need it. And it is often racialized to make white Americans believe that the programs are utilized mainly by Black Americans, in a cynical ploy to leverage racism among whites to decrease support for such programs.

But it is all lie. It is the big lie the Republican Party has used to encourage white voters to vote against their own interests for over 50 years. In reality, more than 40 percent of SNAP beneficiaries are white, and more than one-fifth of the population of the U.S. benefits from government assistance each month. Almost 40 percent of American children receive some kind of means-tested public benefits. But this is not a stagnant population. The majority of those needing benefits need them to help them bridge a period of temporary hardship. A full 50 percent of people receiving public benefits stay on them less than three years, and 43 percent receive them for less than four years. Government "safety net" programs are indeed functioning as safety nets, not "entitlements."

I am going to tell you my story. You might think it is unusual, but you will find out otherwise.

My daughter and I were thrown off our health insurance plan. The joint accounts I held with my ex were emptied, our joint assets dissipated, and our joint income stream redirected unilaterally. I was left with full responsibility for my child, my elderly father with dementia, multiple family pets, and a large and beautiful but isolated house that I could not even afford to heat during the winter. I remember telling my then seven year old daughter, as we shivered under multiple quilts and comforters while the windchill brought the outside temperature below zero, that it was an "adventure" and to pretend we were living on the frontier 150 years ago.

I had no income and no liquid cash in my own name. I used my credit cards, including for legal fees, until my credit was exhausted. For years, I received no or minimal child support (I recently began receiving full child support as a result of court order). I was too proud to apply for public benefits. I kept hoping things would change for the better.

Eventually, we lost our home. I moved myself, my daughter, and my father into an apartment in a state where the cost of living was lower. Because my father had an atypical form of dementia that manifests differently from Alzheimers, Medicaid repeatedly evaluated him not to be eligible for long term care or even in-home care assistance. Due to my caregiving responsibilities for my father (he was unsafe on his own due to wandering and other dangerous behaviors), I was unable to leave my home for more than an hour or two, much less obtain outside employment.

I supported myself, my daughter, and my father by liquidating my retirement savings and selling everything of value I owned, including my wedding ring for scrap gold prices at a pawn shop. I counted myself lucky to have things I could sell, and I taught my daughter that, even in the midst of all our losses, we were still luckier than most people in the world. Together, she and I said a gratitude prayer every night for the roof over our heads and the food in our stomachs. I still could not bring myself to apply for public assistance for food, housing, or cash.

When my father deteriorated enough for Medicaid to deem him finally eligible for long-term care, I was able to place him in a Medicaid funded facility. It is not where he deserves to be nor where I want him to be. But he is safe, housed, fed, given his medications regularly, and has a television to watch and people to chat with. I tell myself it is good enough, that I did everything I could. But I do not really believe it.

Once my father was placed, my daughter and I were given 30 days to move out of our apartment because the owners decided to sell it. I was unemployed and had no money for a security deposit and first/last months' rent. My credit was ruined. We were facing homelessness. I remember feeling grateful we still had our SUV because she and I would be able to sleep in the back if we needed to live in our car. For a brief period, some dear friends took us in, and then we relocated to another state to live in an apartment owned by my mother and step-father. They supported us while I looked for full-time work. Finally, at my mother's insistence, I applied for and obtained SNAP benefits and Medicaid for my daughter. During the telephone interview portion of the application process, I was sobbing. Like so many others, I never thought I would be in such a situation.

Over the course of the subsequent year and a half, I applied for countless jobs. I applied for positions for which I was both under-qualified and perfectly qualified, for temporary administrative positions, and for jobs at Whole Foods stocking shelves. I received no calls for interviews in a year and a half of applying and networking and doing everything possible to find employment. Looking for a job at 50 years old is not the same as looking for a job in one's 30s or even 40s. Half of women over 50 who lose employment become part of what is known as the "long-term" unemployed (without a job for longer than 27 weeks). I did some freelance work, but the pay was not enough to live on or support a child.

Last month, I joined the staff of Shareblue and rejoined the ranks of the full-time employed. I applied for coverage under the ACA just under the final deadline. Now, thanks to the ACA, I have access to health care coverage, and I am again earning enough to be able to pay both the costs of health insurance premiums and food and shelter for myself and my child. After less than two years, I will be able to cancel my participation in public benefit programs.

Now, to be clear, I have talents, education, experience, and relationships that others do not and that helped me find work. I am also white and cisgender. There are many Americans facing far more challenging situations. Even coming out of period of immense loss, I continue to be both privileged and lucky.

While my story might sound unique, what happened to me is actually very common. According to research, large numbers of American women face dire financial consequences related to divorce: About one in five women fall into poverty as a result of divorce; about one in three women who own a home and have children at home when they divorce lose their homes; and three out of four divorced mothers do not receive full payment of child support.

In addition to the impact of divorce on women being common, so are the challenges and demands of unpaid caregiving. Approximately 43.5 million caregivers have provided unpaid care to an adult or a child in need in the United States within the last year. Around 15.7 million of those caregivers provided care, as I did, to someone with Alzheimer's disease or another form of dementia. Women's unpaid caregiving in particular provides an often-unacknowledged foundation for the grossly deficient long-term care system in our country. The value of women's services ranges from $148 billion to $188 billion annually.

As a nation, we have been brainwashed by Republican propaganda to believe that people needing government assistance are "the other." As a result, many of us feel shame when we ourselves face such a time of need. We delay seeking the assistance available to us, reducing our resources further and thereby worsening our ability to get back on our feet. And we do not share our stories, contributing to the lie that those who need help with food, shelter, and healthcare are "the other." Today, I'm breaking my silence, in the hope that doing so will help others have the courage to do the same.

We are the wealthiest nation in the world, and Americans deserve a safety net that is not in the character of the GOP's beloved "free market" to provide. Make no mistake: Conservatives not only want to diminish funding for the already gutted programs that exist, they want to eliminate them altogether, including the Affordable Care Act. There is no shame in facing a period of hardship. There is no shame in needing help, seeking help, or accepting help. Unanticipated life events happen and can cause impoverishment even when you do everything "right."

The people who need help with food, shelter, and healthcare are not some mythical "other" out there. They are us.