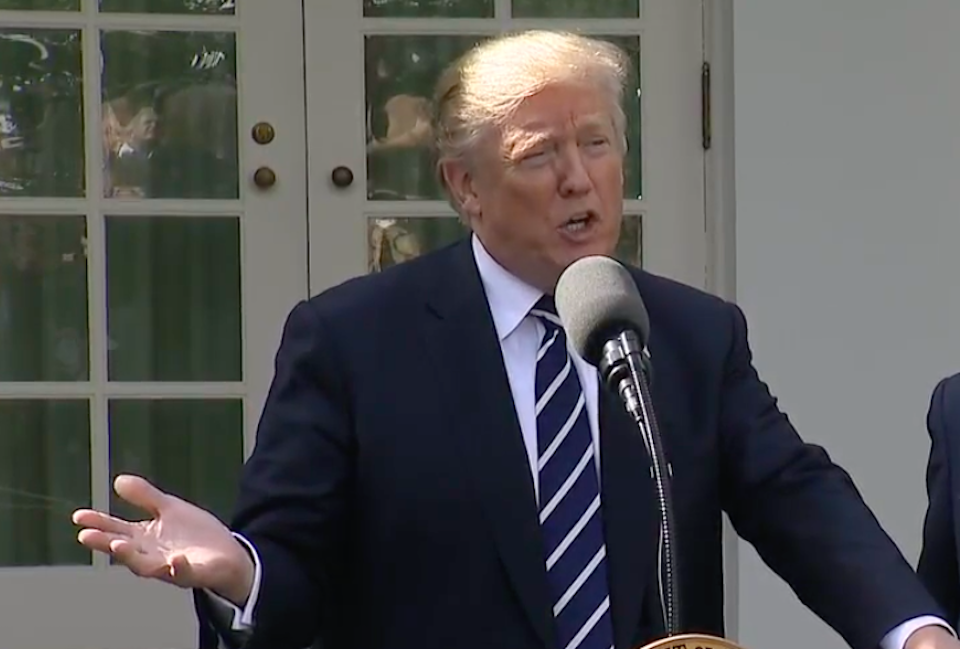 Trump has found time to golf on five separate occasions in the last two weeks, but not to acknowledge the deaths of four U.S. troops killed in action.

Donald Trump confirmed on Monday that he still has not bothered to reach out, even privately, to the families who lost loved ones during an ISIS ambush attack on Oct. 4 in Niger, which claimed the lives of four U.S. troops.

Asked at a Rose Garden press briefing about why, 12 days after the attack, he had contacted the families or even publicly acknowledged the deaths or honored the Special Forces members, Trump complained that it was very difficult for him to deliver bad news.

“It gets to a point where, you know, you make four or five of them in one day, it’s a very, very tough day,” Trump stressed, while answering a question from reporter Sara Murray.

Trump insisted he would reach out soon, that he had written letters to the families “over the weekend,” and that the letters would be sent “today or tomorrow.”

MURRAY: Mr President why haven’t we heard anything from you so far about the soldiers that were killed in Niger? And what do you have to say about that?

TRUMP: Uh, I’ve written them personal letters. Uh, they’ve been sent, or they’re going out tonight, but they were written during the weekend. I will at some point during the period of time call the parents and the families. Because I have done that, traditionally. Uh, I felt very, very badly about that. I always feel badly. It’s the toughest, the toughest calls I have to make are the calls where, uh, this happens, soldiers are killed. It’s a very difficult thing. Now, it gets to a point where, you know, you make four or five of them in one day, it’s a very, very tough day. For me, that’s by far the toughest. So, the traditional way, if you look at President Obama and other presidents, most of ’em didn’t make calls, a lot of ’em didn’t make calls. I like to call when it’s appropriate, when I think I’m able to do it. Uh, they have made the ultimate sacrifice. So, generally, I would say that I like to call. I’m going to be calling them. I want a little time to pass, I’m going to be calling them. I have, as you know, since I’ve been president, I have. But in addition, I actually wrote letters individually to the, uh, soldiers we’re talking about, and they’re going to be going out either today or tomorrow.

Adding to Trump’s callous behavior, he suggested on Monday that his slow-motion, non-response to the killed-in-action troops was similar to how President Barack Obama dealt with military deaths.

That claim represented an obscene fabrication, as a former Obama aide angrily noted on Twitter:

that's a fucking lie. to say president obama (or past presidents) didn't call the family members of soldiers KIA - he's a deranged animal.

During the 12 days since the Niger ambush, the deadliest combat attack on U.S. forces since Trump took office, Trump has had time to go golfing five times but hasn’t had time to reach out to the families. This, despite insisting in September, when he defended his obsession with attacking protesting athletes, "I have plenty of time on my hands."

All four were assigned to the Army’s 3rd Special Forces Group. They were part of a Green Beret-led group in Niger that was meeting with villagers during what was supposed to be a routine patrol. Instead, they were the attacked by 40-50 extremists who fired rocket-propelled grenades and heavy machine guns.

Trump brags about how he’s defeating ISIS, which may be one reason he ignored the deaths of the four U.S. soldiers for nearly two weeks, and why he still has not reached out to their families.