Home National I published this photo of Hillary Clinton and the response was overwhelming
Support progressive journalism.
Donate today 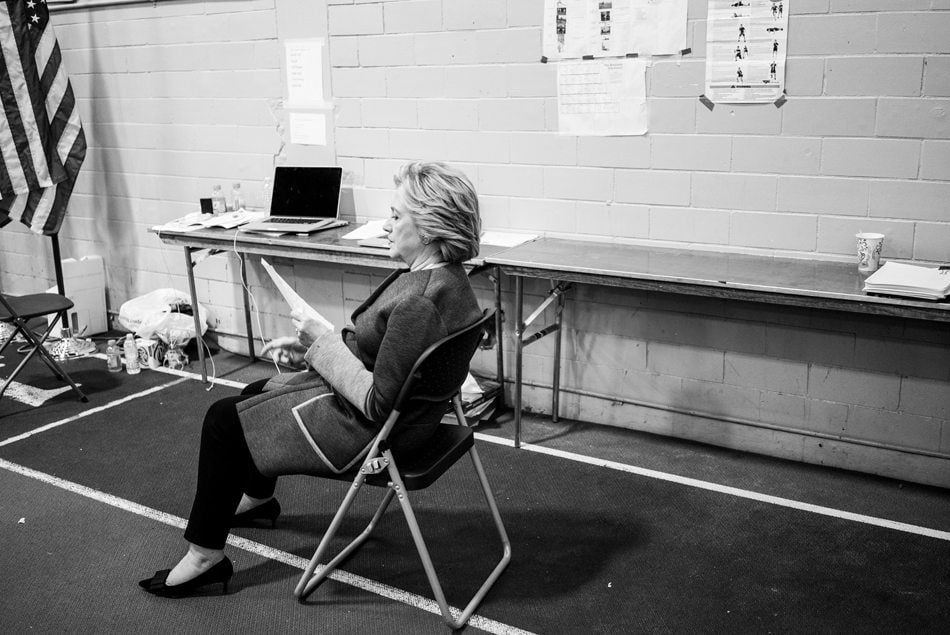 I published this photo of Hillary Clinton taken by Barbara Kinney, along with a few quickly composed thoughts on what the photo meant to me. I have gotten an unusual outpouring of responses from people who see exactly what I do — and are similarly moved by it.

My original piece on this photo read:

I could write an entire essay about why I love this photo. This very candid photo of a woman doing her job in an unspecial room, surrounded by scattered water bottles and the cords to various electronic devices and notices crudely taped to a wall.

This photo of an A student, immersed in her studies.

This photo of one of the most recognizable and admired women on the planet, sitting on a folding chair all on her own, in what has probably become a rare moment of quiet, so she can prepare to lead the free world.

This photo of a woman whose country has often been unfathomably cruel to her, doing her homework so that she can be prepared to be its leader, because she loves this country even when it doesn't love her back, while its flag pokes into the frame from the corner, a symbol of the history, culture, industry, future of a great and struggling nation, stoically petitioning her from its perch above a dirty carpet in a small room.

This photo of diligent preparedness, demolishing ideas about voracious ego and ruthless ambition beneath a crumbling edifice of misogynist narratives about power-seeking women.

This photo of women's work.

This photo of Hillary.

Since it was published, this piece has remained the most highly trafficked at my personal site. Friends have alerted me they have seen it republished in full (with attribution) on social media. I have gotten a number of emails from strangers about it, telling me how much it resonated with them, including a missive from a Clinton volunteer who told me it was one of the most inspiring things he had read this election.

I wondered what it was about this brief, visceral piece that had connected with so many people in such a meaningful way.

I thought about this insightful observation Jamil Smith made:

Contrary to Trump voters, I hardly ever see profiles of Clinton supporters. She's winning. Yet, I hear a lot about her "enthusiasm gap."

It is something I have noticed, too — which is why I am keen to write them. My colleague Peter Daou quite rightly calls Clinton supporters neglected and disrespected.

There is a frustrating abundance of stories casting Clinton as any one of the myriad caricatures of her that have been drawn over decades, but precious few that are written with an eye to look at her, the human being behind the exaggerations, mischaracterizations, and outright lies.

It is remarkably rare to find someone writing about Clinton in a way that neither demeans her, nor tasks her with the colossal obligation to be unyieldingly inspiring. Putting someone on a pedestal, after all, can be just as dehumanizing as kicking them into the dirt.

I do not need Clinton to be on a pedestal. I can see her just fine sitting on a folding chair.

A life in high-level public service, the celebrity of politics, has always struck me as the most irreconcilable of dichotomies: You are at once hyper-visible and unknown.

What a strange thing indeed to have everyone know your face, and believe they know you, but not necessarily know you at all — especially if the mass media labor to make sure you are not.

I don't really know Hillary Clinton, either, but I see her.

And clearly there are other people like me who see her and long for validation; who long to keep company with others who see her, too.