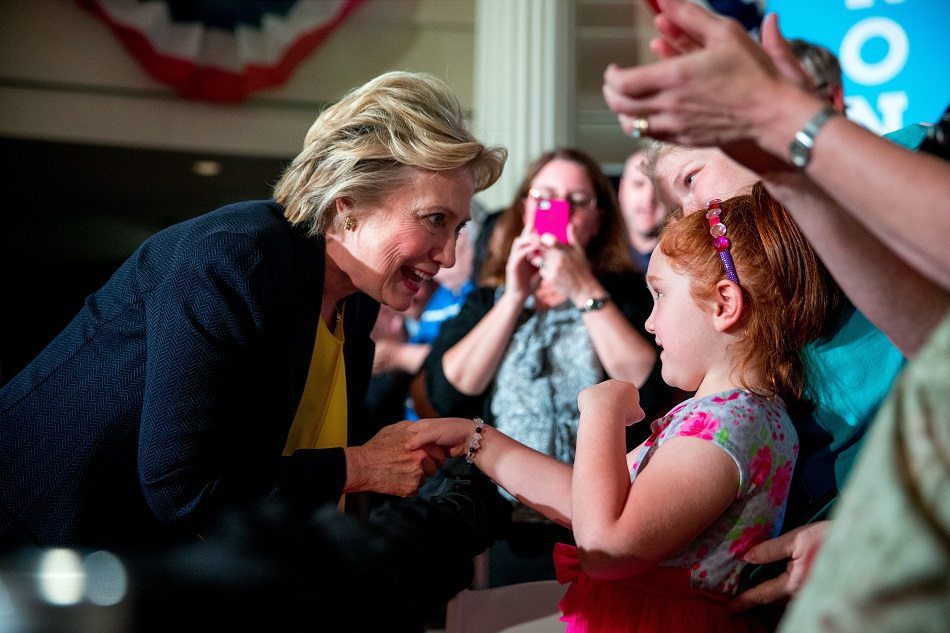 Donald Trump's sexist attitude about women and our bodies is uncomfortable and repugnant. I worry about the untold damage he has done over the course of the campaign. I want young girls and women to have a president like Hillary Clinton who will make them feel confident and strong.

I was fortunate to grow up just prior to the dawn of social media. Enduring teasing and bullying at school for my looks, my weight, and my personality was difficult enough; if Twitter or Instagram had existed then, I do not know how I would have survived my preteen and teen years with any sense of self-worth.

Chelsea Clinton and I are the same age, and I recall with fury hearing crude and nasty comments made about her — her hair, her face, her braces — by grown men, including a sitting senator. As another 12-year-old girl with wild hair, bad skin, and a mouth full of metal, I felt a real kinship with her, though of course her experience was on a far bigger and scarier stage than mine.

And I felt that kinship again when I read about the effect Donald Trump's even more vicious misogyny had on young girls around the country over the course of the campaign.

When the New York Times spoke with teenage girls about the election and the candidates, some of their responses were heartbreaking. 42% of the girls said that Trump's comments about women's bodies had made them feel worse about their own bodies, and 27% of them said that watching Trump in this election had made them less likely to ever choose to run for office themselves.

15-year-old Morgan Lesh said that Trump's crudeness about women's weight "makes me feel extremely insecure about myself.” And 14-year-old Jordan Barrett said that rating women on a numeric scale "really does get into your head that they think I’m ugly or I don’t look good.”

The Clinton campaign knew very well how problematic Trump's rhetoric was for girls and young women still finding their way in the world and tried their best to undo the damage:

It was profoundly saddening to have watched the kind of meanness typical of a school playground lobbed at these girls from the national political stage. And it worried me. It is absolutely true that there is much more at play in the development of an eating disorder than just rude comments about one's body. But as a woman who has spent years suffering from severe anorexia and working like hell through recovery, I can say that society's extremely narrow standards for acceptable female bodies — and the even narrower standards from men like Trump — are not entirely removed from the context.

Because while an eating disorder is about so much more than the size of your body, and while it is so far beyond a "diet," it does often start that way. You feel ashamed of how you look, you feel embarrassed about the number on the scale or the clothing tag. You feel mortified about comments from men who want to make sure you know your body is wrong, not hot enough, taking up too much space.

So you decide, as I did, to get "healthy." To lose just a few pounds. To go on a normal diet. But if the biological kernel of an eating disorder is lurking in your DNA, normalcy is quickly defeated by sickness.

As the numbers on those scales and tags decrease, the power of the eating disorder grows.

Cruel mockery and initial weight loss work in tandem and collude with the genetic propensity inside you to bring illness to the surface. And in some cases — in my case — it can bring you further down than you would have believed possible.

I do not want to see a single person go through the hell I was lucky to survive. And I loathe that Trump may have sparked those flames in some young minds over the past 17 months.

But that same NYT survey also gave me hope, because it showed young women who were inspired and uplifted by Hillary Clinton. In Clinton, girls have a role model where they did not before.

Clinton is a strong, self-assured woman who has been through decades of attacks and hate, and yet she is still standing proudly on the precipice of history. She has endured more insults and invective than nearly anyone else, but she still knows her own worth. She has devoted her life (and the 2016 campaign) to ensuring that all children know their own worth, too.

Clinton imparts to girls and women messages of hope and positivity, and of confident belief in their boundless potential.

If one of Clinton's legacies is that she offers young girls inspiration, motivation, and the encouragement to love themselves as they are, to treat themselves well, and to believe the best about themselves, it will be one of the most profound gifts of her public life and hopefully, her presidency.