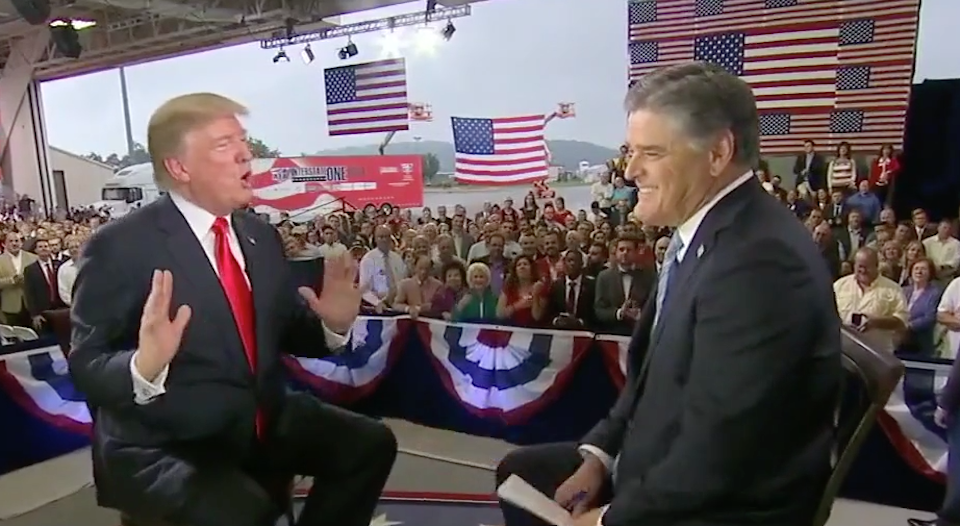 On the day Trump called the free press 'disgusting,' he lavished praise on the leading propagandist on Fox News.

Donald Trump escalated his war on the First Amendment by threatening to revoke the broadcasting license for media he doesn't like.

And then he went to the safe space that is his personal propaganda outlet, Fox News, and told the network's number one Trump cheerleader what a good job he's doing.

Trump sat down for an hour-long conversation with Sean Hannity, who asked zero critical questions, lavished praise on Trump, and frequently encouraged the audience to cheer. At the end of the conversation, Trump returned the favor by praising Hannity:

Earlier in the day, Trump had been far less friendly toward the legitimate press.

In the morning, he tweeted, "With all of the Fake News coming out of NBC and the Networks, at what point is it appropriate to challenge their License?"

In the afternoon, Trump continued his attack on the First Amendment, saying, "It’s frankly disgusting the way the press can write whatever they want to write and people should look into it."

And before his pre-recorded interview with Hannity aired, Trump went even further in his threats to abuse the power of the government to shut down the free press:

Trump has lashed out at NBC throughout the day because NBC first reported the humiliating story that Secretary of State Rex Tillerson called Trump "a moron." Trump has insisted on extending the story by continuing to deny that it's true and even challenging Tillerson to an IQ competition.

But for Hannity — who likes claim he is a journalist despite unapologetically dedicating his show to praising Trump, attacking his critics, and obsessively spreading debunked stories — Trump had praise and gratitude.

That Trump thinks serious journalists should be silenced, but a Fox lackey should be praised, shows just how much disdain Trump really has for the First Amendment.