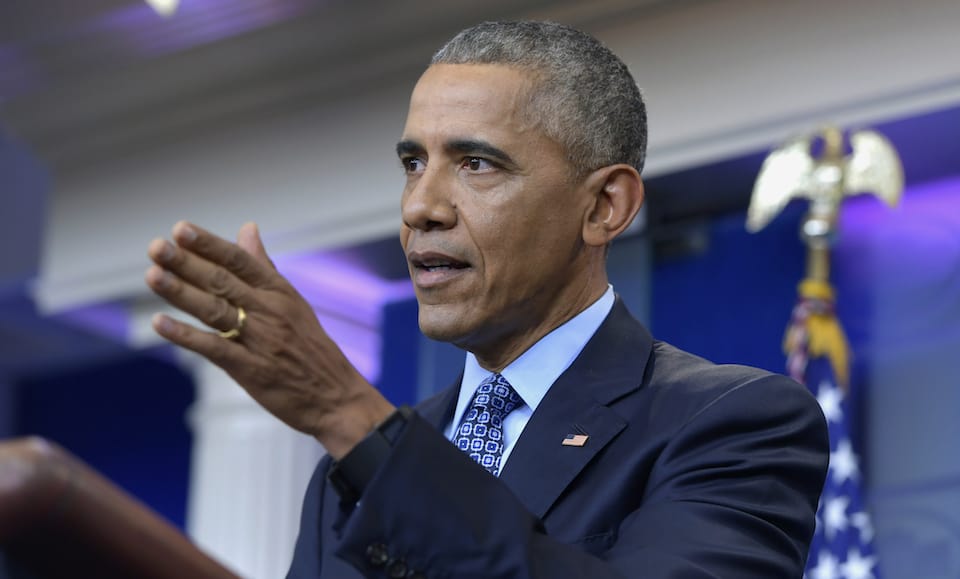 Donald Trump's chaotic presidency has quickly become such a fact of life that it is easy to forget just how abnormal all of this is. As the corporate media puzzles over the mysteries of Trump's eventual policy response (if there is one) to the chemical weapons attack in Syria, it is worth remembering how outrageous Trump's response would have been coming from someone like President Obama.

Donald Trump's performance at a joint press conference demonstrated his obvious lack of preparation to deal with the Syrian regime's chemical weapons attack on its own citizens. After immediately jumping to falsely blame President Obama for the attack, Trump fended off questions about any possible action he might take against Syria, despite his insistence that the attack "crosses many, many lines, beyond a red line."

At one point, pressed for any hint of a response to Syria, Trump even said "I’m not saying I’m doing anything one way or the other," and conspicuously ignored a question about pressing Russia to help in disabling Syria's air force. Even for a situation as complicated as Syria, Trump's utter lack of preparation was stunning. Despite this, the corporate media uncritically swallowed Trump's line that he does not want to "telegraph" actions that do not exist.

Trump's response became even more muddled the day after the press conference, when he told reporters aboard Air Force One that "I think what happened in Syria is a disgrace to humanity, and he’s [meaning Assad] there, and I guess he’s running things, so I guess something should happen,” a remark that was reported under the credulous headline "Trump team weighs military response in Syria."

President Obama, by contrast, called on Congress to authorize a military response to Syria's chemical attacks in 2013, which Republicans in Congress refused to do. Obama then leveraged the Russians into making a deal to disarm Syria of its declared chemical weapons stockpile. The press gave Obama no quarter on the effectiveness of his response, nor did he likely expect any.

But in addition to ignoring Trump's obvious lack of any solid plan to deal with Syria or Russia, the press has given Trump a complete pass over his outrageous defense of Russia hours before that press conference, in an Oval Office interview with The New York Times. Trump alternately seemed to cast Russia as the real victims in the attack, and took pains to isolate Russia from blame (emphasis mine):

THRUSH: What do you think it says about the role of Russia in Syria?

TRUMP: Well, I think it’s a very sad day for Russia because they’re aligned, and in this case, all information points to Syria that they did this. Why they did this, who knows?

THRUSH: What about Russia’s role in all this in abetting the —

The direct involvement of Russia has all but been ruled out, but at a minimum, they are making excuses for Syria, and as allies of Bashar al-Assad, bear full responsibility for the attack as surely as any accessory to a crime.

Now, try to imagine what would have happened if Barack Obama had similarly tried to shield a country, say Iran, from responsibility for something like rocket attacks on Israel. Republicans would have called for his impeachment, and the corporate press would have asked any Democrat who got near a microphone if Obama should resign.

Trump's domestic problems with Russia are about to pale in comparison to his international ones. Painted into a corner by his declaration that this attack was worse than a "red line," Trump will face intense pressure to do something militarily. Secretary of State Rex Tillerson is already out over his skis with a suggestion of regime change less than 24 hours after the White House called Assad a fact of political reality.

But Russia is already pushing Trump to stay out of Assad's way, and has little incentive to go along with any proposed Trump military response. Russia has even less incentive to ignore any Russian casualties that might result from such action. Trump's Russia problem is now the entire world's problem.