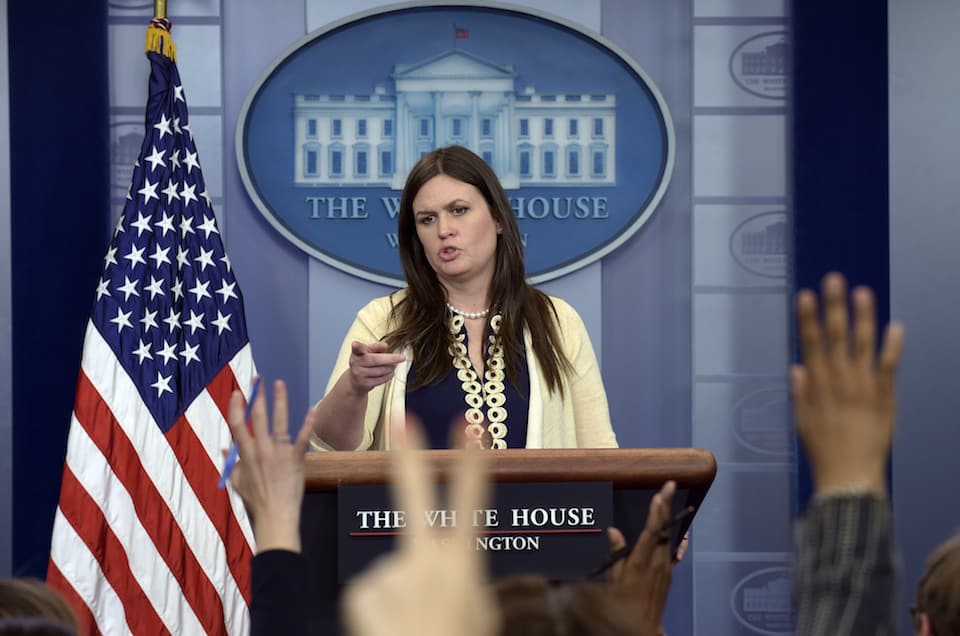 Donald Trump's White House continued its characteristic streak of despotic statements when deputy White House press secretary Sarah Huckabee Sanders told reporters that, as president, Trump's job is "leading the Department of Justice" — an agency that used to be independent from the White House.

Donald Trump's outrageous firing of FBI Director James Comey, the man who was in charge of investigating the Trump campaign, was nothing if not a despotic abuse of power.

And at the first White House daily briefing since the firing, Trump's spokesperson perfectly matched that deed with despotic words.

Fox News correspondent John Roberts was one of many reporters to press deputy White House press secretary Sarah Huckabee Sanders on Comey's firing, asking her why Trump's attitude toward Comey had changed.

While attempting to explain why Trump applauded Comey's interference during the election, but now cites it as the reason for firing him, Sanders declared that as president, Trump is the leader of the Justice Department. Sanders then went on to accuse Comey of "atrocities."

ROBERTS: Back at the end of October, the president was applauding the FBI director when he reopened the investigation into Hillary Clinton's e-mail. So, he seemed quite happy with him at that point. What changed?

SANDERS: Well, I think the president's position. One, he was a candidate for president, not the president. Those are two very different things. Once you take over leading the Department of Justice, that's very different than being a candidate in a campaign. As you guys all know, there's a very clear distinction between those two things. I think also, having a letter like the one that he received, and having that conversation that outlined the basic, just atrocities in circumventing the chain of command in the Department of Justice.

The Department of Justice is, of course, an independent agency, a fact that was reinforced vigorously during the Obama administration, and famously illustrated during the Bush administration, when Comey himself tried to prevent then-Attorney General John Ashcroft from being coerced by the White House while he was in the hospital with pancreatitis.