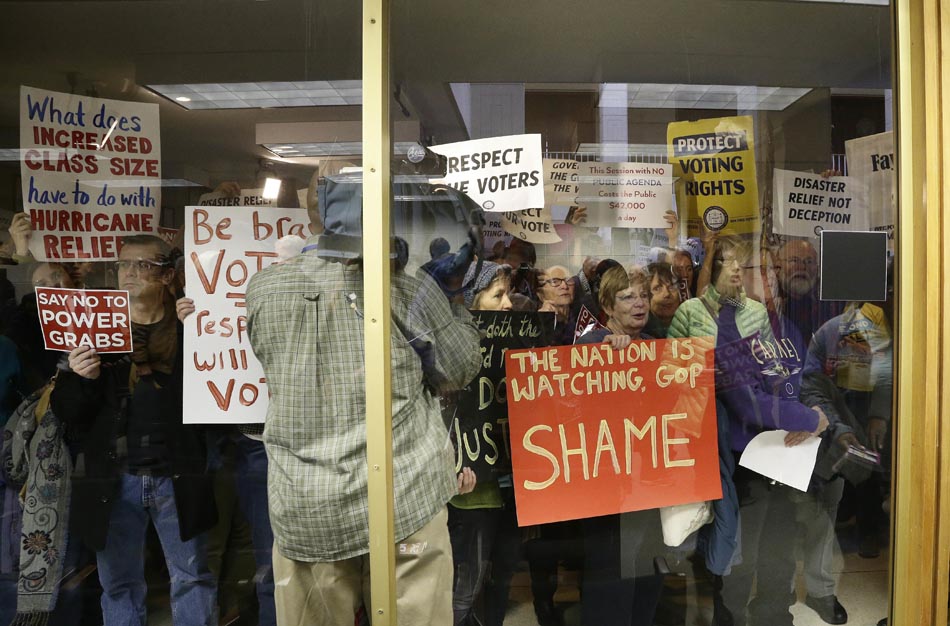 Not only are Republicans failing to vigorously address the attack on our democracy from outside our borders, but, in North Carolina, they are waging their own attack on democracy right here at home.

With the disclosure that Russian President Vladimir Putin himself ordered the cyberattacks on the presidential election, Americans are waking up to threats to our democracy from overseas.

But there is a simultaneous war against democracy on the home front as well, and nowhere is this more apparent than North Carolina.

A month ago, voters in the Tar Heel State elected a Democratic governor. After a desperate attempt to steal the election, Republican incumbent Pat McCrory eventually conceded the race, saying, "I personally believe that the majority of our citizens have spoken and we now should do everything we can to support the 75th governor of North Carolina, Roy Cooper."

The Republican-controlled North Carolina General Assembly, however, has other plans.

The state legislature has called an unprecedented special session, where they are debating a variety of bills designed solely to strip power from the incoming Democratic administration.

Here are just some of the bills being debated in the special session:

It is worth noting that the current North Carolina General Assembly members were elected from massively gerrymandered districts (although recent court rulings mean that is likely to change soon). Unlike Cooper, who was elected by the whole state, the legislative districts were heavily skewed to cancel out Democratic voters. So Republicans in the General Assembly cannot even convincingly claim they have a mandate to be in office at all, much less strip the executive power of a governor elected with a clear majority of the people.

What is more, after crowds showed up at the state capitol in Raleigh to protest, peaceful demonstrators were forcibly ejected and credentialed journalists were summarily arrested:

Now being told to leave. Am told this includes media and I'll be arrested if I don't leave. Politely said they'll have to arrest me. #NCPol

Safe but arrested. Losing phone shortly. In transit to jail. Keep covering things until I am out. Could be a long night.

What is happening in North Carolina is not an anomaly; it is part of a pattern. Between Donald Trump’s assaults on long-established political and diplomatic practices, and the clear evidence a foreign dictator compromised the election while a major political party knowingly stood aside for him, we are experiencing the erosion of American democracy on a scale not seen in living memory.

It is incumbent to stay engaged with and oppose the subversion of our country’s bedrock principles, not just at the federal level but at the state level, too.