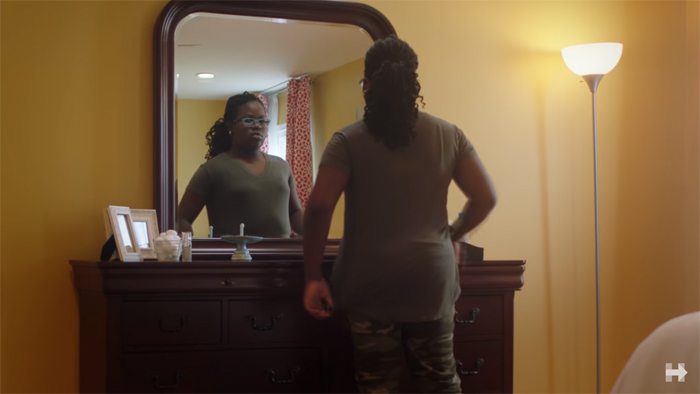 Hillary Clinton has released a powerful new ad highlighting the real-life effects on girls of the sexist, body-shaming talk in which Donald Trump routinely engages. Trump's comments about girls and women are not funny, they are not entertaining, and they are not without consequences.

"Mirrors," the new ad from the Clinton campaign, features girls looking at themselves in the mirror as Trump's demeaning comments about women's looks echo in the background.

"Is this the president we want for our daughters?" asks the ad.

Trump does not respect women. (Nor does his running mate.) His vile comments about women's appearance and their primary value as property are legendary. His policies regarding women's healthcare and earnings are grim.

Perhaps nothing more succinctly encapsulates Trump's disdain for women and girls than this 2013 tweet:

Golf match? I've won 18 Club Championships including this weekend. @mcuban swings like a little girl with no power or talent. Mark's a loser

Using "little girl" as an insult tells us everything we need to know about Trump and his views on female people. We are—and always will be—"less than" to him.

A person who doesn't view women as equal cannot be entrusted to lead the nation in a way that ensures our legal equality is respected and enforced. We cannot be assured that even our most basic rights will be upheld by a man who believes we are inferior; who uses us to insult other men.

We have already had to fight to secure a number of our rights in a continuing struggle for equality. One of those hard-won rights was the right to vote, and millions of women will be exercising that right to make sure Trump doesn't have the chance to delay, or roll back, the fight for gender equality.

And, by the way, Trump: This little girl has a better golf game than you ever will.