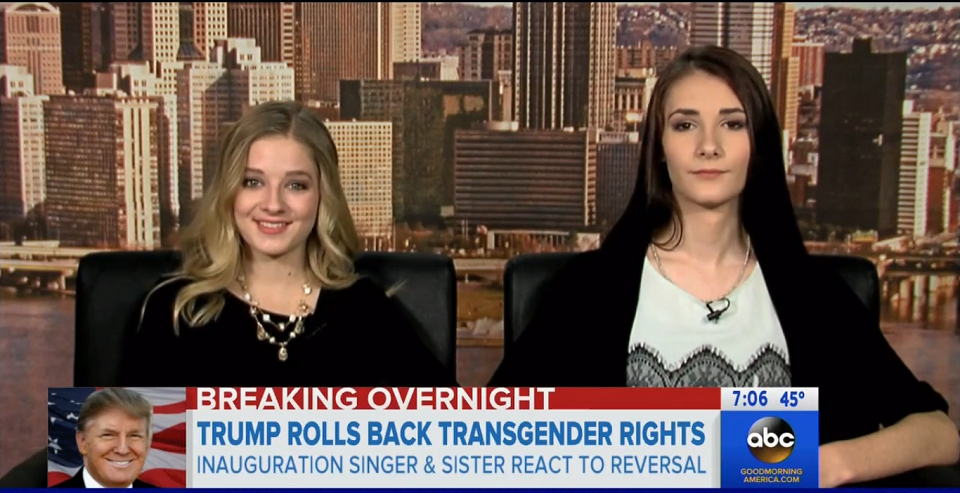 Donald Trump’s decision to immediately revoke protections for transgender children has provoked a firestorm of outrage, and one of the most outspoken voices of protest is the singer who performed the national anthem at Trump's inauguration, whose sister is transgender.

On Wednesday, the Trump administration rescinded guidelines that had been put in place by President Obama which instructed public schools to allow transgender students to use the bathroom of their choice. Echoing arguments made a generation ago by segregationists, White House spokesman Sean Spicer claimed that decisions about these protections are a "states' rights issue."

New York Attorney General Eric Schneiderman condemned the move: "President Trump's decision to rescind anti-discrimination protections for transgender students is yet another cruel move by an administration committed to divisive policies that roll back the clock on civil rights. Transgender individuals deserve to live in dignity, without fear of bullying or discrimination."

And now another notable voice is speaking out against the decision.

Jackie Evancho sung the anthem at Donald Trump’s inauguration, but after this attack on transgender rights, she wrote on Twitter, "I am obviously disappointed in the @POTUS decision to send the #transgender bathroom issue to the states to decide." She later wrote, "@realDonaldTrump u gave me the honor 2 sing at your inauguration. Pls give me & my sis the honor 2 meet with u 2 talk #transgender rghts."

Evancho’s teenage sister, Juliet, is transgender, and is part of a lawsuit against her school district in Pittsburgh, Pennsylvania, alleging discrimination by the district for forcing transgender students to use separate bathrooms.

The Evanchos appeared on ABC’s Good Morning America to make their case against Trump’s discriminatory decision.

Jackie explained that she wanted to speak to Trump and "enlighten him on what my sister, I've seen her go through every single day in school and people just like her, what they deal with, the discrimination, it's terrible." Juliet said she wanted Trump to know that "being in such an unsafe environment won't do any good for not only the transgenders and the LGBT community but as well as everyone as a whole."

STEPHANOPOULOUS: Let's get more from Jackie Evancho and her transgender sister, Juliet. Thank you both for joining us this morning and, Jackie, let me begin with you. We saw your tweet in Cecilia's piece. Have you heard back from the president?

JACKIE: No. I have not yet heard back that I know of but I'm hoping soon.

STEPHANOPOULOUS: If you get that meeting, what do you want to tell him?

JACKIE: I guess I just want to enlighten him on what my sister — I've seen her go through every single day in school and people just like her, what they deal with, the discrimination, it's terrible. And I guess I kind of just really want him to relook at that.

STEPHANOPOULOUS: And, Juliet, what does the president need to know about what you go through every day.

JULIET: Basically, that being at a high school where the policies on the bathroom are unclear, as Jackie has said, I kind of live it every day going through discrimination, I've had things thrown at me. I've had people say pretty horrible things, and the unsafe environment is just very unhealthy. So I feel like Donald Trump needs to know that being in such an unsafe environment won't do any good for not only the transgenders in the LGBT community, but as well as everyone as a whole.

STEPHANOPOULOUS: Did your life change when the guidelines came out from President Obama, Juliet?

JULIET: So far luckily nothing’s very much changed for me. Of course, when I heard about it I was very disappointed, and I realized that we would need to take action in order to enlighten the administration on everything.

STEPHANOPOULOUS: But has your school overall been protective of you?

STEPHANOPOULOUS: And, Jackie, of course, you did sing at the inaugural. The president was a big fan. Would you sing again?

JACKIE: Most definitely, because the reason why I did sing for the inauguration was not politics, it was for the honor and the privilege to perform for my country and that will stay the same, I think.

STEPHANOPOULOUS: Okay, let's hope you hear from the president, thank you both very much.