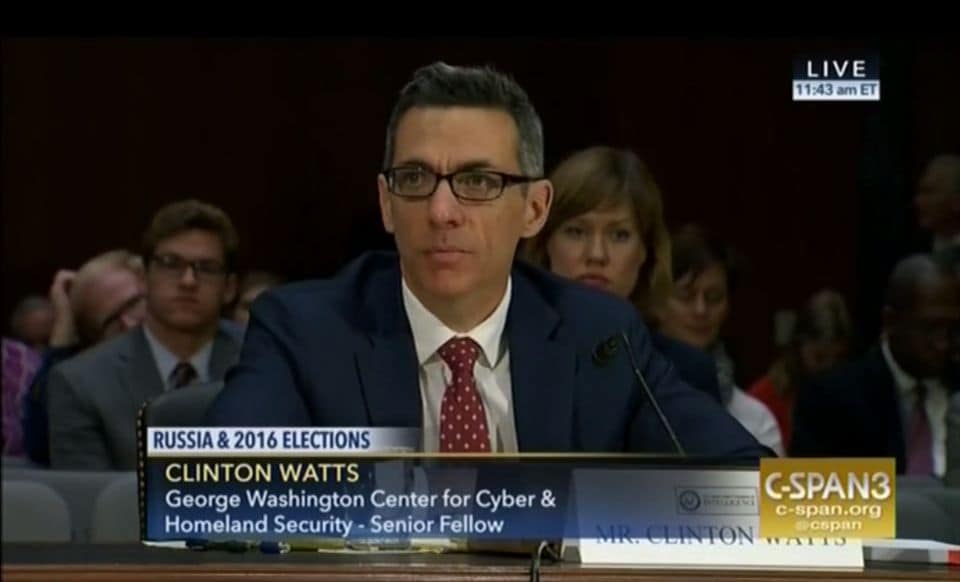 In testimony at the Senate Intelligence Committee hearings on Russia's attempt to interfere in the 2016 election, cyber expert Clint Watts testified that Trump "used Russian active measures" against his political opponents over the course of the campaign.

Cyber expert Clint Watts, testifying before the Senate Intelligence Committee as it investigates Russian interference in the 2016 presidential election, told the panel that Donald Trump "used Russian active measures against his opponents" during the campaign.

Watts is currently a Robert Fox Fellow for the Foreign Policy Research Institute and a Senior Fellow at the Center for Cyber and Homeland Security at George Washington University. He served as a U.S. Army infantry officer, a FBI Special Agent on a Joint Terrorism Task Force, and as a consultant to the FBI’s Counter Terrorism Division and National Security Branch.

Active measures, or aktivniye meropriyatiya, is a Russian technique dating back to the days of the KGB and the Cold War of dispensing disinformation and propaganda in order to influence events within another country, particularly the United States.

WATTS: The answer is very simple and it's what nobody is really saying in this room. Which is, part of the reason active measures have worked in this U.S. election is because the Commander-in-Chief has used Russian active measures at time, against his opponents. On 14 August 2016, his campaign chairman, after a debunked –

LANKFORD: When you say his, who's his?

WATTS: -- cited the fake Incirlik story as a terrorist attack on CNN, and he used it as a talking point. On 11 October, President Trump stood on a stage and cited a – what appears to be a fake news story from Sputnik News that disappeared from the Internet. He denies the intel from the United States about Russia. He claims that the election could be rigged. That was the number one theme pushed by RT, Sputnik News, white outlets, all the way up until the election. He's made claims of voter fraud, that President Obama's not a citizen, that, you know, Congressman Cruz is not a citizen.

So, part of the reason active measures works, and it does today in terms of Trump Tower being wiretapped is because they parrot the same line.

The investigation is proceeding despite Republican attempts at sabotage, and the evidence of Russian meddling, while also in contact with the Trump team continues to pile up. It is vital for Americans to know what happened to their election, and what Donald Trump's role in Vladimir Putin's attack was.