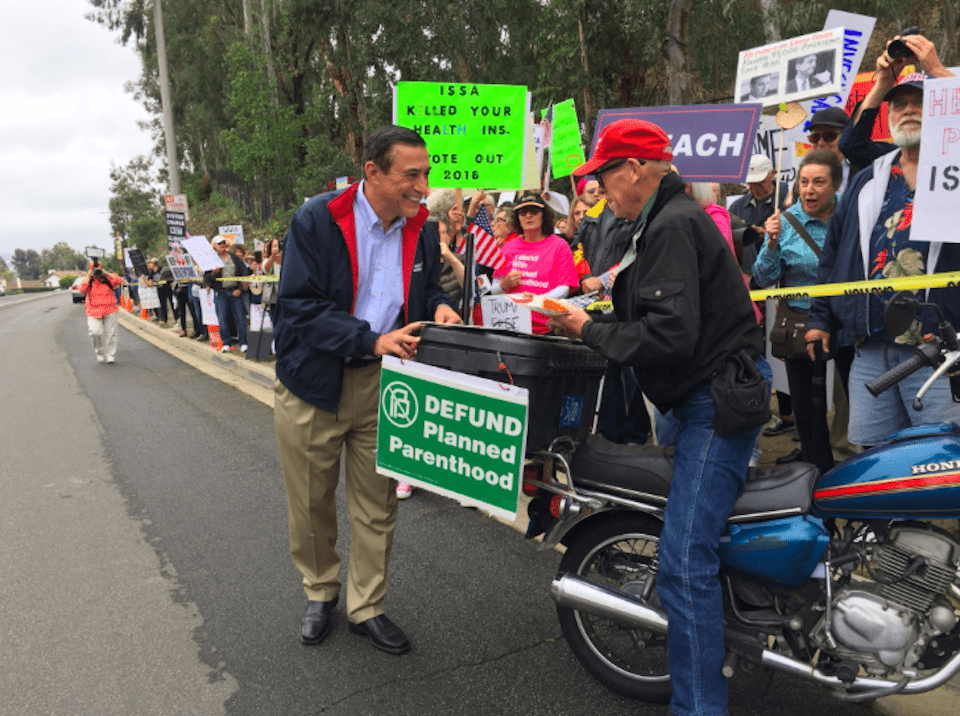 Darrell Issa
Get The American Independent in your inbox

During an encounter with a group of constituents, Rep. Darrell Issa snubbed a voter worried about the GOP and Donald Trump, while smilingly handing a Trump supporter some cake. His rude actions seem strange as well, considering his seat is extremely vulnerable, and Trump's brand is increasingly toxic.

Rep. Darrell Issa, one of the most vulnerable Republicans in the House of Representatives, again aligned himself with Donald Trump and his increasingly toxic brand through his response to a protest outside his office.

According to video of the event that an organizer posted online (now removed) and a statement by Mike Levin, who is running against Issa, Issa refused to shake the organizer's hand and, per Levin, "was generally rude to her."

Issa can later be seen, in a photo he posted to his Twitter account, grinning and handing cake to a red-hatted Trump supporter with a "Defund Planned Parenthood" sign.

Darrell Issa posted this with the Trump supporter. If you agree we should fight for #PlannedParenthood, join us at https://t.co/WLBYaPIedP pic.twitter.com/SnXYWtMzZo

A photo of Issa standing on the roof of the building and taking pictures of the protest, rather than continuing to engage protesters, went viral.

.@DarrellIssa was rude to the rally organizer. Spoke to a few people before the roof incident. Then brought cake to the one Trump supporter. pic.twitter.com/ZPUF3K8arB

Issa's decision to cozy up to a Trump supporter, and to give the cold-shoulder to someone on the other side, is curious.

The seat Issa holds in California's 49th congressional district is considered one of the most vulnerable currently held by a Republican, a status that the National Republican Campaign Committee (NRCC) admitted to by putting Issa on their list of House members requiring extra campaign support in next year's midterms.

Issa was a key figure in his previous position as chairman of the House Oversight Committee in pushing multiple investigations intended to harm both former President Barack Obama and Hillary Clinton. And in 2016, he won reelection by a slim 0.6 percent in a race against Doug Applegate, who has announced he is running against in 2018.

Since Trump's election, Issa has been confronted by voters on his close relationship to unpopular Trump policies, particularly the effort to repeal Obamacare.

Proximity to Trump increasingly seems as if it will have a major downside for Republicans facing re-election next fall, and Issa's actions continue to tie him to this scandalous presidency and historically unpopular president.