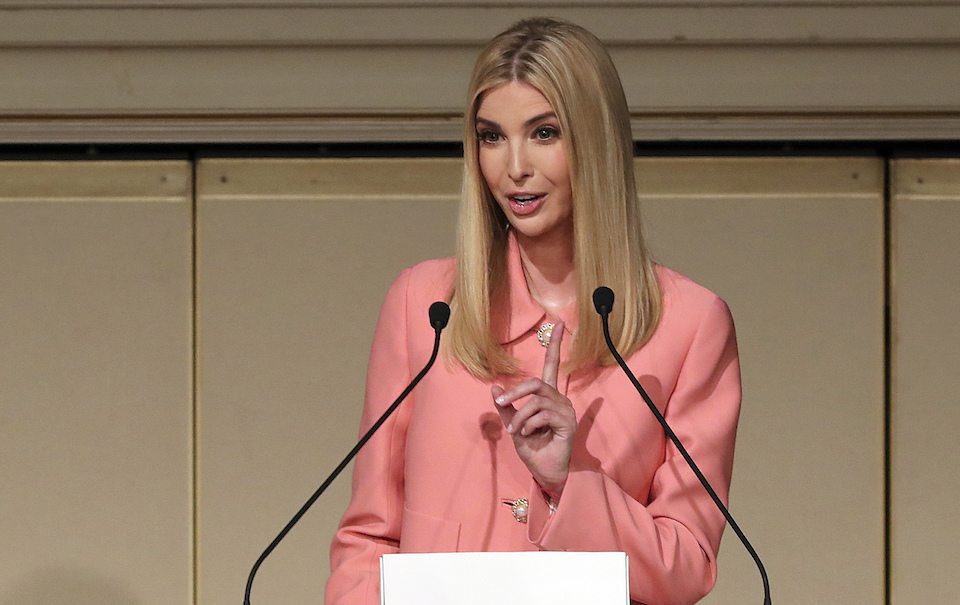 (AP Photo/Eugene Hoshiko, Pool)
Get The American Independent in your inbox

Trump's daughter has always pretended to promote empowerment of women. Nobody buys it — at home or abroad.

Ivanka Trump has always sold herself as a champion of “women’s empowerment.” It is a phrase she loves to use, enthusiastically promoted by the news media.

But as she pitches “empowerment,” she is meeting fewer and fewer people willing to listen to her.

On Thursday, she was one of the speakers at a women’s conference in Tokyo. She was met with a tiny crowd, and a vast sea of empty chairs:

This is what the hall in Tokyo looked like as Ivanka Trump gave her speech at a Japanese government women’s conference pic.twitter.com/7IzXMpxa6b

One possible reason no one wants to listen to Trump anymore is that her talk of “women’s empowerment” is nothing more than a string of superficial platitudes backed with no real work or ideas.

Despite being nepotistically hired as a White House “adviser,” she has had no influence on any of her father’s ruthlessly anti-woman polices. She sat by as the Trump administration let businesses kill birth control coverage, ended civil rights guidelines for campus rape survivors, and forced pregnant undocumented teenagers to go to anti-abortion “crisis centers” against their will.

The few times she has actually weighed in, her ideas to help women have been a farce. Her “childcare reform” proposal was just a tax cut for the rich. And she actually led the charge to kill an Obama-era rule requiring businesses to report if they have a gender pay gap.

It is worth remembering as well that the Indonesian factory that makes Ivanka’s designer clothing horribly abuses female workers — many of whom work for slave wages and can only see their children once a month. If Ivanka seriously wanted to empower women, there are several hundred in her employ that she could do something for right now.

Every empty seat in the Tokyo auditorium represents someone who doesn't buy Ivanka as a champion of women. She can pay all the lip service she wants, but talk is cheap and her actions speak loudest.