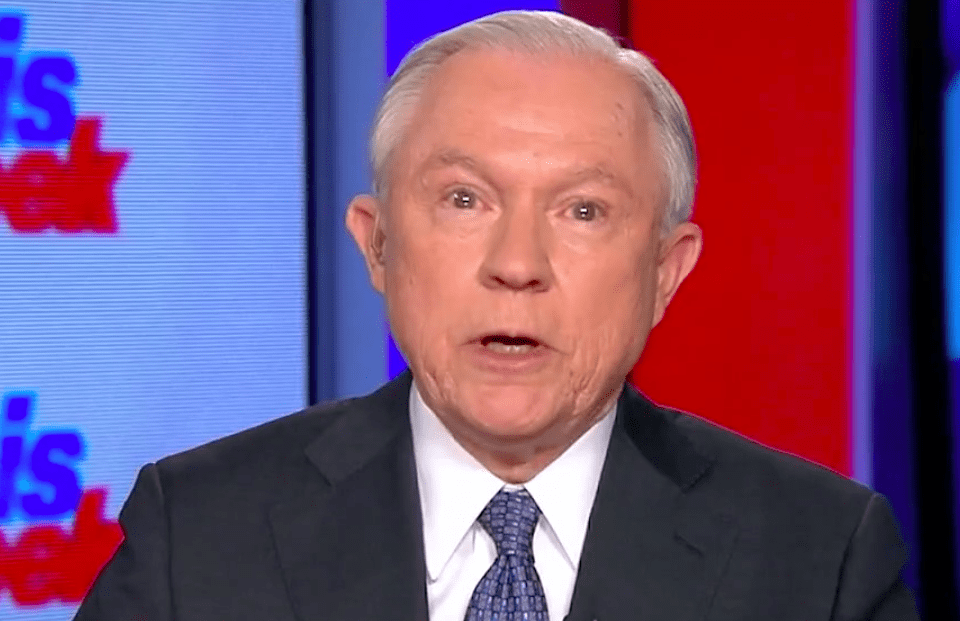 Donald Trump's broken promise to have Mexico pay for his border wall has taken a new twist, with Attorney General Jeff Sessions revealing a potential plan to get children of undocumented immigrants to pay for it instead, under the racist logic that "these are mostly Mexicans."

In his desperate search to chalk up a legislative win in his first 100 days, Donald Trump has set up a showdown with Congress over funding for his border wall that could potentially result in a government shutdown.

The Trump administration abandoned the lie that Mexico would pay for the wall a long time ago, but Attorney General Jeff Sessions apparently has another plan.

He would saddle U.S. citizen children with the bill instead, simply because he views them as "Mexicans" anyway.

STEPHANOPOULOS: You sound quite confident right there. Do you have any evidence that Mexico is going to pay for it?

SESSIONS: Well, we're going to get paid for it one way or the other. I know there's $4 billion a year in excess payments, according to the Department of the Treasury's own inspector general several years ago that are going to payments to people — tax credits that they shouldn't get. These are mostly Mexicans. And those kind of things add up — $4 billion a year for 10 years is $40 billion. There are a lot of ways we can find money to help pay for this. But in the long run —

STEPHANOPOULOS: How are you going to capture that money?

STEPHANOPOULOS: How are you going to capture that money?

SESSIONS: Well, the Department of Treasury, several years ago, under the Obama administration, said that if you change the regulations and enforced it properly, you would save up to $4 billion a year.

Sessions is referring to refundable tax credits that are claimed by undocumented adults, which did, indeed, total over $4 billion in 2011.

But as Rep. John Lewis pointed out at the time, children born in the United States are U.S. citizens, regardless of their parents' immigration status:

Even to the extent that Sessions seems to think that the national origin of these childrens' parents matters, the fact is that 41 percent of undocumented immigrants hail from countries other than Mexico, and his contention that "these are mostly Mexicans" is without basis, other than his own racist beliefs. The report he cites makes no mention of country of origin.

Democrats have no intention of allowing Trump to hold America hostage to his border wall, or his attempt to destroy health care for millions of Americans. At a recent town hall meeting, Rep. Hakeem Jeffries (D-NY) told constituents that Democrats won't be voting for any budget that defunds Planned Parenthood, or provides "a penny of taxpayer dollars" for Trump's "stupid, silly wall," shutdown or not:

.@RepJeffries: "We don't think a dime of taxpayer dollars should go to a down-payment on (Trump's) stupid, silly wall." pic.twitter.com/Jr4EVSfFGn

JEFFRIES: We don't think a penny of taxpayer dollars — he's asked for three billion — that a penny of taxpayers should go for a down-payment on his stupid, silly wall. (applause) And he won't get my vote in connection with a budget that does so. And so the spending requested, as it relates to the wall, needs to come out.

For most people, the answer to that last question is a resounding "no," but that is the government we have for the time being. Fortunately, we also have a strong movement to resist destructive and racist policies like these.